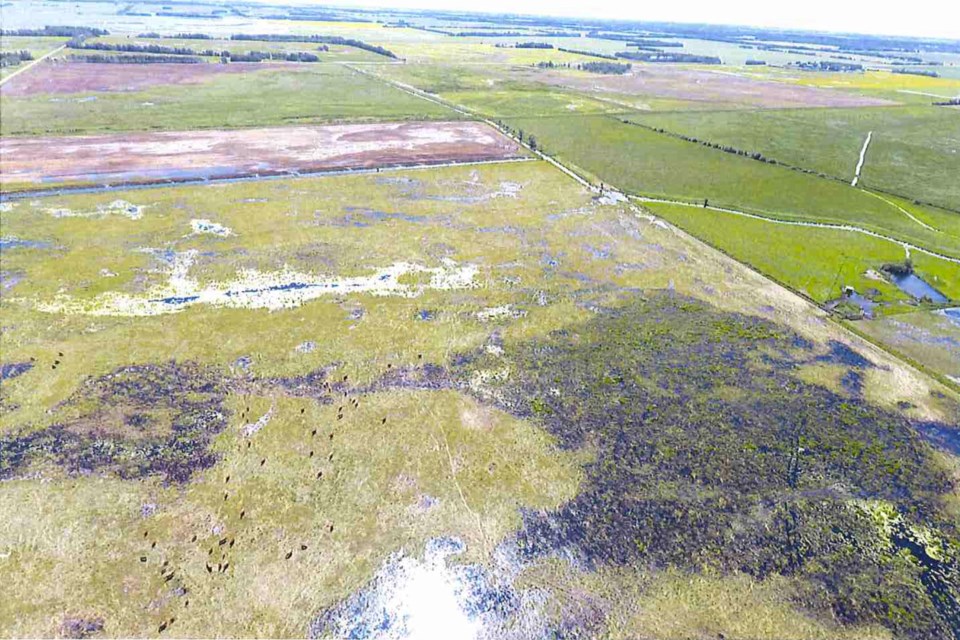 A flooded cattle pasture July 10, three days after Westlock County let water flow through a weir to drain Lebeaus Lake. The channel that runs near this property and carries the water overflowed, claim landowners, and contributed to already existing overland flooding. Supplied.

WESTLOCK — Westlock County councillors agreed to clean out the channel that diverts water from Lebeaus Lake with the help of nearby farmers who were unhappy that they got flooded over the summer with water that overflowed from the channel.

Landowners also want to see regular and objective monitoring and reporting of water levels on the lake, the county channel and Dapp Creek, where the excess water ultimately flows. In a delegation to council Oct. 13, downstream landowner David Woynorowski said more than 90 per cent of landowners supported this over three other options that included leaving things as they are or taking out the weir structure entirely.

“The county has released significant water volumes from Lebeaus Lake. It clearly has overflowed the channel and it’s flooded farmland downstream. I think it’s clear downstream landowners have not added one gallon of water to the problem of overland flooding. They have sought to minimize the overland flooding caused in part by the county,” said Woynorowski.

“We’re not saying this overland flooding is all the county’s problem, but there’s certainly a part of it I think can be attributed back to the release of water” after the county opened the weir July 7.

Council put this to a vote after Coun. Isaac Skuban instigated a discussion on the spot.

The solution Woynorowski pushed and council ultimately accepted is the product of a Sept. 10 meeting in Pibroch between affected landowners both downstream and around the lake and representatives from the county, Alberta Environment and Parks and Ducks Unlimited. Skuban attended with Coun. Dennis Primeau.

In Pibroch, Nelson Jespersen, who farms by the lake, said about 213 acres he owns and 88 acres he rents were under 15 inches of water. For them, the weir has to be opened. But Jespersen agreed the channel needs to be fixed; that as one part of his solution. He also offered manpower to clean the county ditch.

Downstream of them, farmers with land near the channel say they were flooded because the water was released. It didn’t fit in the channel, they say, because the county didn’t comply with the requirements in their licence to operate the weir and channel.

“By the county’s own admission, as evidenced by the video and county correspondence, it has not completed weekly measurement and annual reporting and it has not maintained the channel,” Woynorowski told councillors. He’s referencing drone footage the county commissioned which also shows some private channels that were dug by farmers, some of which lead into the county’s ditch. AEP requires permits for any water diversion.

Dig out the channel

The channel cleanout will be done under the county’s guidance to the specifications they have, but farmers will contribute labour. Woynorowski confirmed that Jespersen and one other farmer have offered their excavators.

“(The farmers) said under the direction and guidance of the county, since it is their channel, their project, they need to probably do the surveying to see how deep and how wide it should be cleared, cleaned to its original specs, yeah, they most certainly would be part of the solution. That’s what I heard loud and clear.”

And according to interim CAO Rick McDonald, it shouldn’t be a problem to have private individuals do the work.

“We have a very good connection to this group of landowners so I think we have to proceed with some action. I think we can come up with a plan … between our staff here and engineering” fairly quickly, he said.

Primeau too said this has to be done soon, at the latest Nov. 1: “It gets to 40C below by the middle or end of November, so we need to get rolling on this pretty quick.”

Farmers also want the county’s permission and guidance to clean out Dapp Creek. However, McDonald explained that the county doesn’t have authority to touch the creek. What they can do is remove beaver dams.