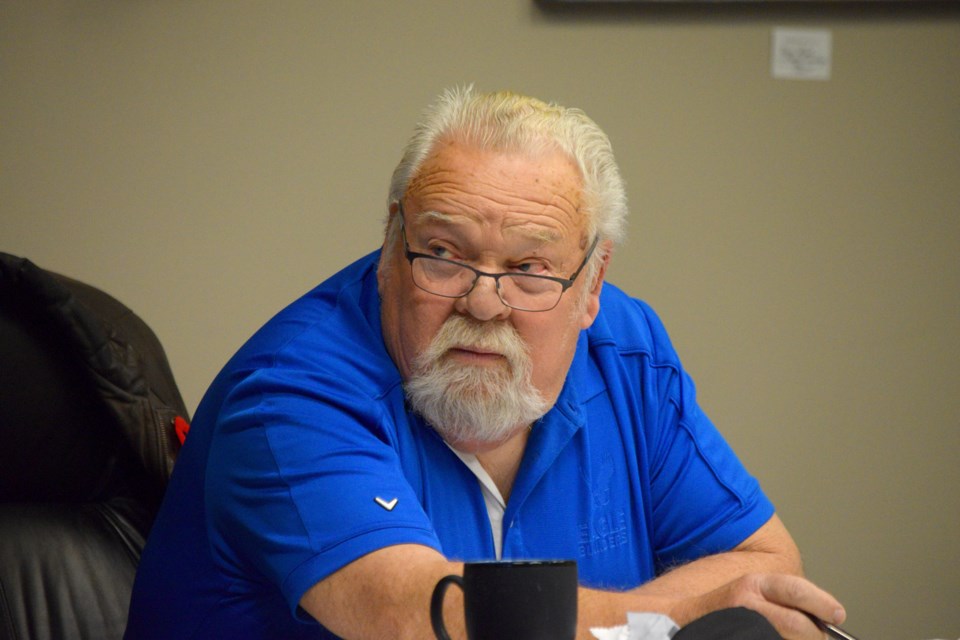 Coun. Bill Lane questioned Barrhead and District FCSS executive director Shelley Dewsnap about a cost of living adjustment wage increase for staff for 2021, noting many organizations have frozen wages or even rolled them back. Barry Kerton/BL
BARRHEAD - Barrhead and District Family Community Support Services (FCSS) executive director Shelley Dewsnap had some good and not so good news for County of Barrhead councillors.

The reason, she said, in large part is because of the pandemic, which mandated a change in how they provide programming and also lowered demand.

“We still have a comprehensive seniors’ program and a very comprehensive program for those people needing connecting in the community,” she said. “We are also trying to increase the services we offer through each program.”

The Barrhead FCSS is unique in the province as it is a stand-alone, non-profit society. While they, like all other Alberta FCSS organizations, receive the bulk of their funding through provincial and municipal government grants in an 80-20 per cent split, with the province being responsible for the larger portion, the rest of their funding for programming that falls outside the province’s mandate comes from community funding.

The province’s contribution $315,423 and although Dewsnap believes their contribution will remain the same, provincial funding is not as secure as it once was.

“I know FCSS is under review and that [the government] is talking about four per cent rollbacks in other areas,” she said. “I don’t know if that will apply to us, but it is something we keep in mind as COVID is causing a tough time for everyone.”

Other expected revenue sources include home support fees from its senior support program, administration fees and donations for a total of $484,868.50. Expenses are projected to meet income for a balanced budget.

Included in the 80/20 budget is a one and a half per cent cost of living adjustment (COLA) for all staff.

“It is not a lot of money in today’s world, but I want to make sure that I pay my staff appropriately,” Dewsnap said, adding FCSS has remained open in some fashion the entire time of the pandemic.

Like many businesses and organizations in the spring, FCSS closed its doors to the public, only opening them, by appointment when services couldn’t be provided remotely, via telephone or videoconferencing.

Before FCSS reopened its doors to the public, it required a major effort to reorganize the space to ensure people can social distance.

When entering FCSS, staff and the public alike have to hand sanitize, answer a COVID screening questionnaire and undergo a temperature check. Masking is also mandatory.

In addition to redesigning the space to ensure a minimum of two-metre physical distancing, Plexiglass barriers have also been installed.

Coun. Bill Lane questioned the COLA staff wage increase noting many businesses and organizations are ‘holding the line’ or even cutting back wages.

Dewsnap said the increase amounts to a relatively small amount, somewhere between $5,000 and $6,000.

“My board agrees that we should try to offer that 1.5 knowing that … we reorganized some of our programming, we could afford to give our employees a little bump,” she said.

Woodlands County councillors also unanimously passed a motion during their Nov. 17 meeting to approve a new three-year agreement with the Barrhead and District FCSS Society to provide programs for residents in the Fort Assiniboine and Goose Lake areas.

Joan Slootweg, manager of community and planning services, said the county previously entered into a five-year agreement with the Barrhead FCSS to provide programs for Fort Assiniboine and Goose Lake in 2015. That agreement expires in December.

In return for Woodlands County providing FCSS $12,500 for each year of the agreement — which was the same amount charged under the 2015 agreement — Fort Assiniboine and Goose Lake residents would have access to programs like subsidized counseling, a Volunteer Income Tax Completion program for seniors and low-income families, a volunteer registry, Seniors Home Support and preventative programs for youth.

Residents would also have access to other grant programs and community initiatives offered through the society. “Woodlands County residents would have … essentially the same services as what Barrhead and district residents are provided,” Slootweg said.

Besides the fact the contract is for three years instead of five, Slootweg said there are also some additional charges related to travel time and mileage for the Home Support Housekeeping program.

However, these new charges were similar to what was in that portion of the five-year agreement, she said, adding that these charges cost the county about $6,000 per year.

Finally, Slootweg indicated that the new agreement includes a termination clause should Woodlands County choose to end the arrangement before Dec. 31, 2023.