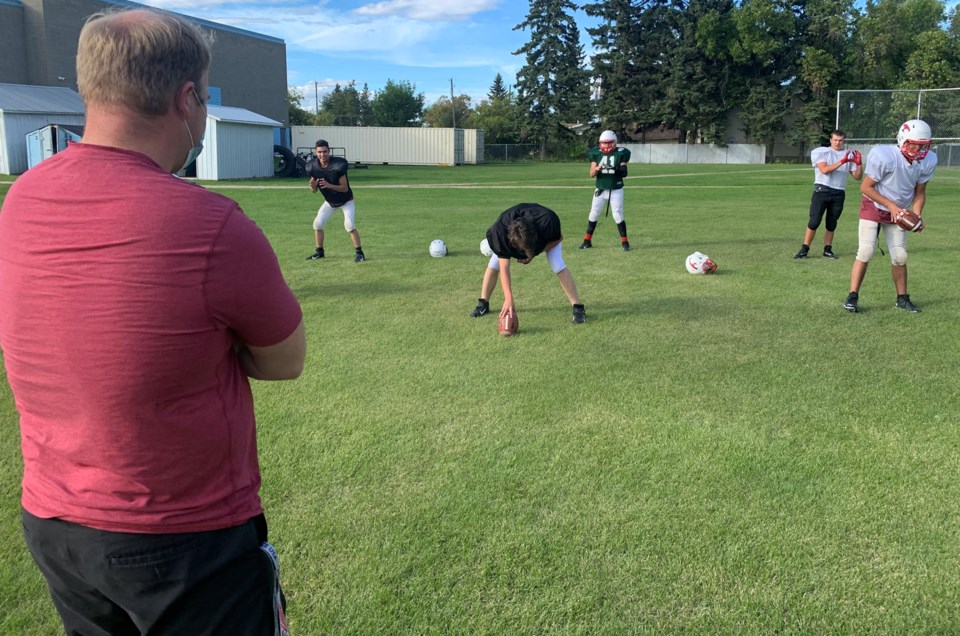 Due to rising COVID-19 cases, extracurricular activities across the Pembina Hills School Division, like the Westlock Thunderbirds football team, have been temporarily suspended.

R.F. Staples School has seven active cases (all students), Westlock Elementary School has two cases (one student and one staff) and Eleanor Hall School in Clyde has one case. Trustees will review that decision Nov. 12 when they meet again.

It includes all school sports and teams like the Westlock Thunderbirds.

But Supt. David Garbutt says there’s no talk of shutting R.F. down yet, despite the cases. That decision, he said, is made by Alberta Education on his recommendation and in consultation with Alberta Health.

“We have not had to reach out to them yet, because we’ve been able to cover all the staff that’s been away and the fair number of students that have been away. So we have not made that recommendation to date. And for me, the test would be ‘How quickly would the turnaround be.’ That’s a pretty serious matter if we make that recommendation,” said Garbutt over the phone Oct. 29.

“The hope is it’s going to be dealt with the same day that we make the recommendation because as you may realize right now, Alberta Health is swamped. It’s taking some time, sometimes before 24 and 48 hours before people are getting test results back and families are being notified about being close contacts.”

Last week, both R.F. principal Wayne Rufiange and WES principal Pierre Ouimet told the Westlock News that they notified parents of close contacts personally before Alberta Health Services contact tracers. At R.F., only a small fraction of those students showed up to school the next day. Parents were notified and the kids were picked up.

Garbutt explained that at Barrhead Composite High School, the first Pembina Hills school to record a case, AHS didn’t notify close contacts the same day the school was told about the case.

“It’s hard to nail down solid numbers. The template that’s sent to us from Alberta Health is very comprehensive and complex, it needs to be, but then for us to actually utilize that data to let people know how many are self-isolating here, they’re all returning at different times,” said Garbutt.

At Eleanor Hall, all those self-isolating returned Thursday: 19 students, two teachers and one support staff.

One of the things that complicates the reporting is that people return on different dates depending on when they were last in contact with the positive case. Plus, not all positive cases are determined the same day.

“For instance, we have a teacher (at R.F.) that we were expecting to return tomorrow. Well, we’ve gotten word that the last COVID positive test of a student, that teacher was in contact with them so now their isolation is extended another week,” said Garbutt.

Buses prove to be another challenge in tallying numbers.

“Where it gets a little more complicated is we’re not just dealing with school sites. A lot of our kids take the bus to school and they’re travelling with kids from other schools. The rule that Alberta Health tends to follow is two seats in front of the child who tested positive and two behind and those seats across the isle — two forward, two back—have to self-isolate too,” said Garbutt.

Ultimately, it depends on the routes or whether or not a student takes a transfer bus.

Too many cases might trigger a school shutdown, but so can inadequate staffing. If there aren’t enough teachers or staff on site to supervise and teach, the Supt. can recommend that classes move in-person.

“I have to talk about what the current situation is leading to the request for change, how long we want to have that change, an outline of the instructional plan for students and staff, and a draft of the communication going home to parents and students.” The decision is made following consultations with Alberta Health.

So for school divisions, what would cause a change in how classes are taught (at home or in-person) is mostly guided by whether or not there’s enough staff available.

In the school reopening guidelines, there is no number of active cases in a school given that would trigger a school closure.

“They may have a threshold in mind but they have not shared that,” said Garbutt.

The province’s terminology in reporting COVID-19 cases in school is also seemingly backwards to Garbutt. An outbreak, says the province, happens when there are two to four cases in a school. When they reach five or more, the school is placed on a watchlist — which is where R.F. Staples sits.

“They are monitoring there, but they won’t reach out to us and say ‘Have you considered running classes from home?’ They’re relying on me to make that recommendation and explain the circumstances and they’ll either give me a thumbs up or say ‘No, you can’t.’”