Partial modernization of Westlock Elementary the No. 2 priority, as a number of upgrades have been completed with stimulus funding
Apr 18, 2021 9:00 AM By: Kevin Berger 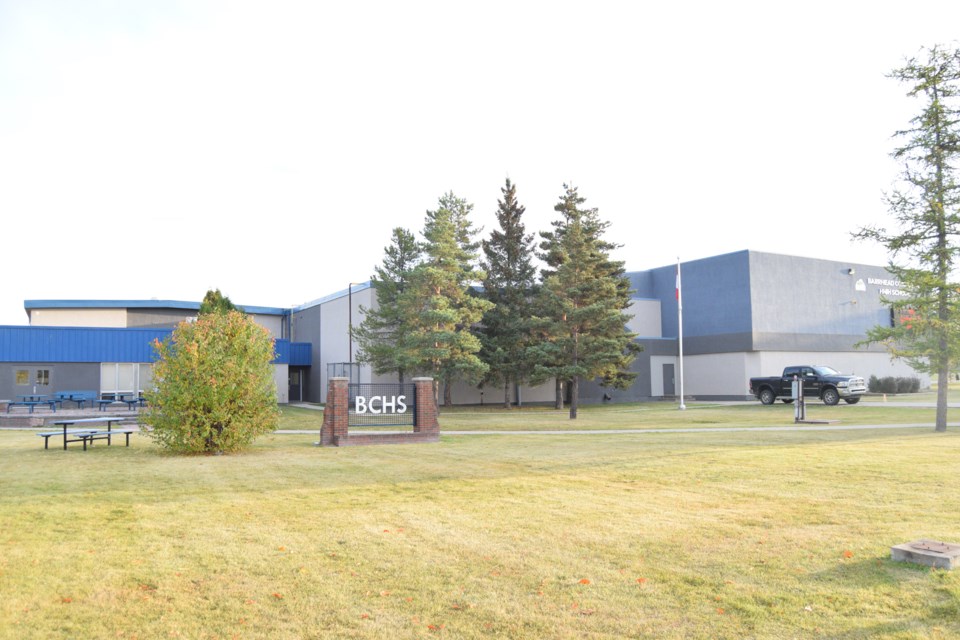 A full modernization of Barrhead Composite High School (BCHS) is now the top priority in Pembina Hills' three-year capital plan. Previously, the division was hoping to convince the province to build a replacement school.

The Pembina Hills School Division has changed the top priority in its 2021-2024 capital plan to a full modernization and right-sizing of Barrhead Composite High School (BCHS), as the previous top priority — a replacement high school — is no longer viewed as feasible in the current economy.

Following a presentation by director of facilities Tracy Tyreman, Pembina Hills trustees passed a motion at their April 14 meeting approving the full modernization and right-sizing of BCHS and a partial modernization of Westlock Elementary School (WES) as the No. 1 and No. 2 priorities respectively in the three-year capital plan.

School divisions must annually submit their three-year capital plans to Alberta Education, which then decides what capital projects to proceed with each year.

Based on the priorities identified in Pembina Hills’ previous plans, Alberta Education has approved replacement schools for the village of Clyde and the hamlet of Neerlandia, as well as the addition of six modular classrooms for the school in Dapp.

Last year, a replacement school for BCHS was the top priority in the capital plan, as demolishing the old school and constructing a new building was deemed the best option during value scoping sessions conducted in 2018.

Notably, this replacement school would have housed students from Grades 6-12, and its construction would have also involved demolishing a portion of Barrhead Elementary School and re-configuring it into a K-5 school.

But, as Tyreman pointed out, that was before the COVID-19 pandemic. Based on his conversations with a representative of Alberta Education, the chance of getting a replacement school for BCHS is now “slim to none,” he added.

Tyreman stressed that something needs to be done with BCHS, as parts of the school dated all the way back to 1956 and 1962.

A full modernization and right-sizing of BCHS would cost an estimated $28.956 million, while a replacement school had been estimated at $44 million. (Of course, that was in 2018, and Tyreman suggested it would probably be much higher now.)

“I think if we were to hold out for a new school, it could be years before we’re considered,” he said.

A full modernization of WES was the second priority in the 2020-2023 capital plan, but that has been downgraded to a partial modernization because Pembina Hills has already done a lot of work at the school thanks to stimulus funding.

In 2020, Pembina Hills received approximately $2.5 million in Capital Maintenance and Renewal (CMR) funding to put towards upgrades at WES, as well as R.F. Staples School in Westlock and Fort Assiniboine School.

Some of the upgrades that were funded through CMR at Westlock Elementary included a roof replacement, new air handling units and hot water boilers.

“We did a wealth of projects over there,” Tyreman said.

Even if the province did not approve funding for a partial modernization of WES, Tyreman suggested he could probably fund the remaining upgrades to the school using his annual Infrastructure Maintenance and Renewal (IMR) funding.

Tyreman suggested it was possible that Alberta Education would approve both projects, but the chances were very slim.

Tyreman then showed the trustees a couple possible scenarios for the modernization and right-sizing of BCHS, noting that he had thrown them together just for the meeting and he had some more work to do on the plans.

Depending on what Alberta Education approves, Tyreman suggested they may also demolish two wings that lack any boilers and electrical transformers, as well as one gymnasium.

Trustee Jackie Comeau pointed out that demolishing the wings identified in the plan would result in the loss of numerous classrooms.

Tyreman indicated that they need a minimum of 32 classrooms, but he would not leave BCHS with fewer classrooms than they need. “I’m not going to put something forward if it’s basically not going to work for us,” he said.

He also clarified for board chair Jennifer Tuininga that the new plan would no longer involve demolishing a part of Barrhead Elementary School, which would remain K-6.

One major difference between the old BCHS and a fully-modernized school would be the addition of a new multi-purpose “flex space” that students could use to hang out, eat lunch or do other activities.

He also presented slides showcasing a refurbished entrance and lobby, along with a revitalization of the existing courtyard at BCHS.

"By the time we’re done with this modernization, I want this school to look fantastic. It’s not a brand-new school, but we can make this look pretty good,” he said.

The partial modernization of Westlock Elementary, meanwhile, was estimated to cost $6.3 million.

This project would involve upgrades within the 1970 and 1986 sections of the school, including new flooring and fixtures within all bathrooms; barrier-free door hardware, flooring, millwork, window blinds, drywall and painting in classrooms; upgrading and replacement of electrical branch circuit panels; new flooring, lockers; drinking fountains, boot racks, drywall and painting in corridors; the replacement of exterior doors and aluminum windows; upgrading the asphalt driveway and surrounding sidewalks; installing a new fire alarm system and PA system; and upgrading the gymnasium with new lighting, acoustics and painting.

While there are a number of items to work on, Tyreman acknowledged that he could take care of these upgrades as time goes on should Alberta Education not fund the partial modernization.