Town of Barrhead councillors approve policy that would make businesses and not-for-profit organizations eligible for an up to $3,000 grant
Jun 2, 2021 3:00 PM By: Barry Kerton 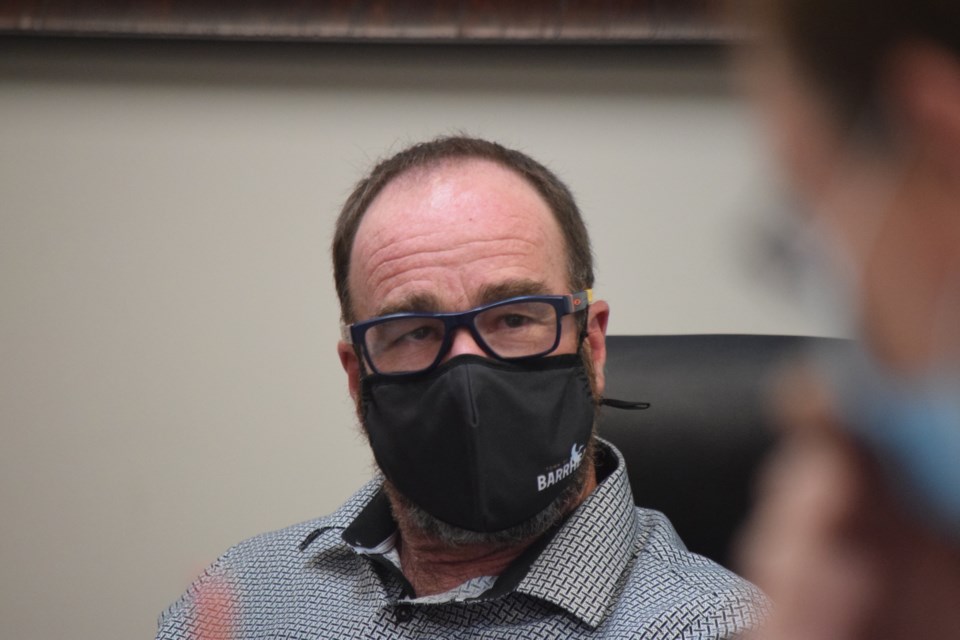 Town of Barrhead Coun. Don Smith emphasized the need for privacy during a discussion about whether or not to let business groups such as the Barrhead and District Chamber of Commerce sit on a committee that would determine if businesses were eligible for a new COVID-19 economic recovery grant. Barry Kerton/BL

BARRHEAD-Barrhead area businesses and not-for-profit organizations will soon have another avenue to help cover the financial issues caused because of the pandemic.

Councillors approved$15,000 be set aside for its new policy 12-029, a.k.a. the Local Economic Recovery Grant Program, during their May 25 meeting. The funds would come from the town’s Contingency Operating Reserves.

The program, which is in partnership with Community Futures Yellowhead East, allows local businesses and not-for-profit organizations and societies to apply for a one time grant of up to $3,000 to support the "current needs and recovery efforts" that have been adversely impacted by COVID-19. Applicants must match the amount they receive dollar-for-dollar.

Successful applications are judged on how they best meet a variety of criteria such as job creation, how funds are utilized to help people return to work economic diversification, business transformation and creative placemaking, i.e., the funds are used to support or contribute to the community's overall vibrancy.

Ineligible expenses include rent, lease or mortgage payments, payroll or wages, debt reduction, utilities, insurance or expenses that are not a direct result of COVID-19.

Community Futures is a not-for-profit community-driven organization that provides a wide range of small business services and business management tools for people wanting to start or expand an existing business as well as those looking to sell or buy a business. It was founded in 1986 and is funded by the federal government in Western Canada by Western Economic Diversification Canada. The Yellowhead East branch is based in Whitecourt and one of 27 the organization has in Alberta.

Its board consists of locally-elected representatives from member communities.

Barrhead chief administrative officer Edward LeBlanc said the grant pool will be further augmented by a yet-to-be determined contribution from Community Futures. He added that more than likely, it would be $15,000.

CFYE executive director Michelle Jones, who joined the meeting via teleconference, said the final amount would be determined by a weighted point system determined by how many of the organization's criteria the municipality met. Later in the meeting, Jones said, she believed that the town's policy would allow Community Future to give close to if not all of the maximum $15,000.

Coun. Leslie Penny asked if there was a formula for work-in-kind that businesses, or especially not-for-profit groups, could use to offset the amount of money needed.

No, LeBlanc replied, adding that to keep applications as simple as possible, administration opted for money only.

Coun. Rod Klumph noted the town used a similar one policy from the Town of Whitecourt as a template.

"What has been the uptake?" he asked.

Jones said that to date, Whitecourt has received four applications, three of which had been approved.

"It is still fairly new, but I anticipate that the town will receive more applications than there are funds available," she said.

Mayor Dave McKenzie asked if the committee in Whitecourt had any flexibility when determining if an application met the program's criteria.

For instance, he said there might be an instance that the committee might believe an applicant applied for too much. "Is there a mechanism where the committee could approve a lesser amount?" he asked.

Jones said it would depend on how the committee, as well as their operating criteria, was set up but in Whitecourt, the committee (which CFYE is part of) did have that flexibility.

"At the end of the day, it will depend on the pot you have and the number of applications you have," she said. "If you don't have enough applications, that would be one way to spread the money around."

LeBlanc interjected that the Barrhead committee would consist of himself and representatives from CFYE and Alberta Labour.

The latter, he said, is because they would have a better knowledge of both the federal and provincial COVID relief programs available.

"If someone is making an application that is better served by an existing program by senior government, the committee could advise them of that," LeBlanc said.

Originally, the policy also stated that the committee would include representatives from both the Barrhead and District Chamber of Commerce and the Barrhead Main Street Merchants' Association (upon their acceptance) to sit on the committee as non-voting members.

Jones said they recommended the associations' inclusion, as it would help the town get the full amount of CFYE funding, noting they have limited funds to contribute to the project.

CFYE has enough funding to partner with seven municipalities. If they receive more applications, they would then use a weighted-scorning system to distribute the monies.

Part of CFYE's criteria to get the funding was the inclusion of the business community.

The rationale behind the suggestion is that the associations might also not only be able to add their expertise to applicant’s submissions, but give them additional benefits such as potential free membership in their organizations or discounts when applicants did business with association members.

"It recognizes that there are other organizations that have programs that support business and that [the town] isn't the only one with skin in the game," she said.

"I don't want another business to know about the problems I am having with my business," he said.

LeBlanc agreed that council needed to be aware of privacy issues.

Mayor Dave McKenzie suggested that the chamber and merchants' association’s participation might be better suited to the application process.