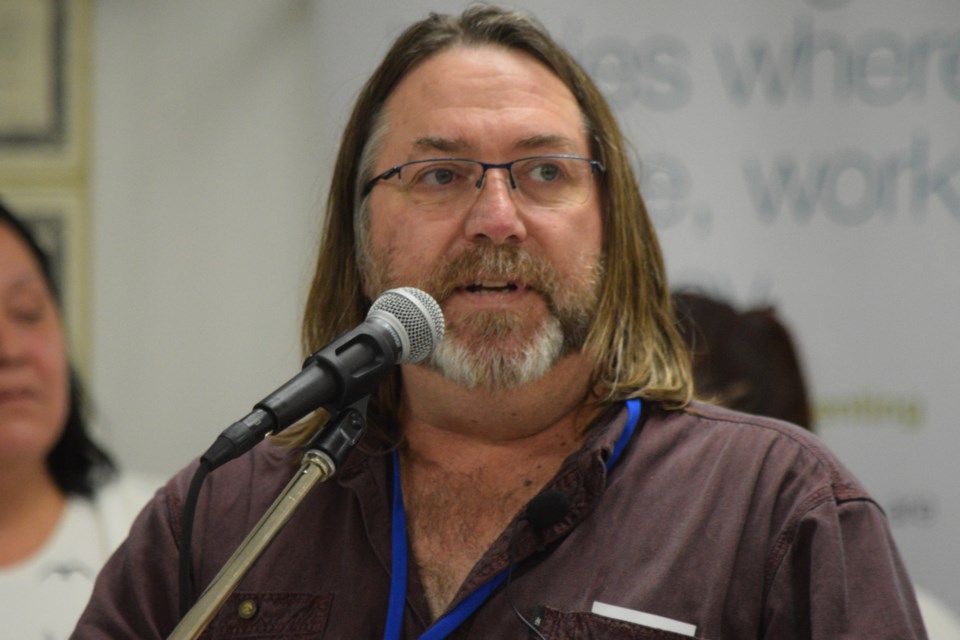 BARRHEAD- The Ripple Connection Support Centre (RCSC) is to help people in the community support one another by learning just how effective peer support can be.

That is what RCSC assistant executive director Drew Fitzgerald said about the centre's peer-to-peer training sessions.

"The idea is to be able to support each other through both bad and good ... To bring each other up at times instead of relying on a therapist or a doctor," he said of the 16-week course.

The RCSC is a not-for-profit organization, which opened in 2010, it provides services for people who directly suffer from mental illness, as well as their families and caregivers. On any given day RCSC serves between 20 and 30 people daily.

Among the services the centre provides a referral service to Alberta Mental Health and Addictions, peer-to-peer counselling, which this course hopes to expand, a food bank and help to find low-income housing.

It's door's have been closed to the public, but the centre is still providing programs via telephone and video conferencing, which is how the course is being conducted.

Facilitator Scott Robins said the course was produced in-house at the Ripple, but the idea goes back even further starting with the People-first movement in Barrhead.

"[The concept behind the course] is to wrap our heads around how we can benefit one another," he said. "That there is a connection between people that elevates our wellness and sense of happiness."

Robins added many support groups use the peer-to-peer model as a counselling tool for its members, but it was first adopted by mental health organizations.

He said peer counselling differs from a friend lending a sympathetic ear in that the relationship is more formal.

"What I've learned over the years is that you don't necessarily need to be an expert to deliver expertise," Robins said. "There are a lot of experts out there who encourage us to use the information we have to help others."

Having said that, he added people can become peer support counsellor, noting one can become certified in peer support through Peer Support Canada which is partnered with the Canadian Mental Health Association.

Robins said the course is an introduction to what peer support is and it follows a template of eight modules consisting of two one-hour to an hour and a half sessions to introduce the concept. The next week the group meet again and discuss and redefine they believe is the most important parts of the course to them.

Ideally, he said the idea behind the course is that it is self-perpetuating in that one group will complete the course and then teach another group.

"One of the strengths of the peer-to-peer support is that it is continually evolving and the course will change slightly for every class," Robins said.

He added that although the course will continually evolve and grow as the new mentors learn new things and add their perspective the base will always remain the same.

In about 2016 the Mental Health Commission of Canada (MHCC) developed a series of guidelines of "practice and training" of peer-to-peer support programs.

These guidelines, serve as the base for this and future courses.

Unfortunately, Robins, who was preparing to facilitate the first lesson, said they are not taking additional students, however as previously mentioned the RCSC hopes to offer the course again in a few months.