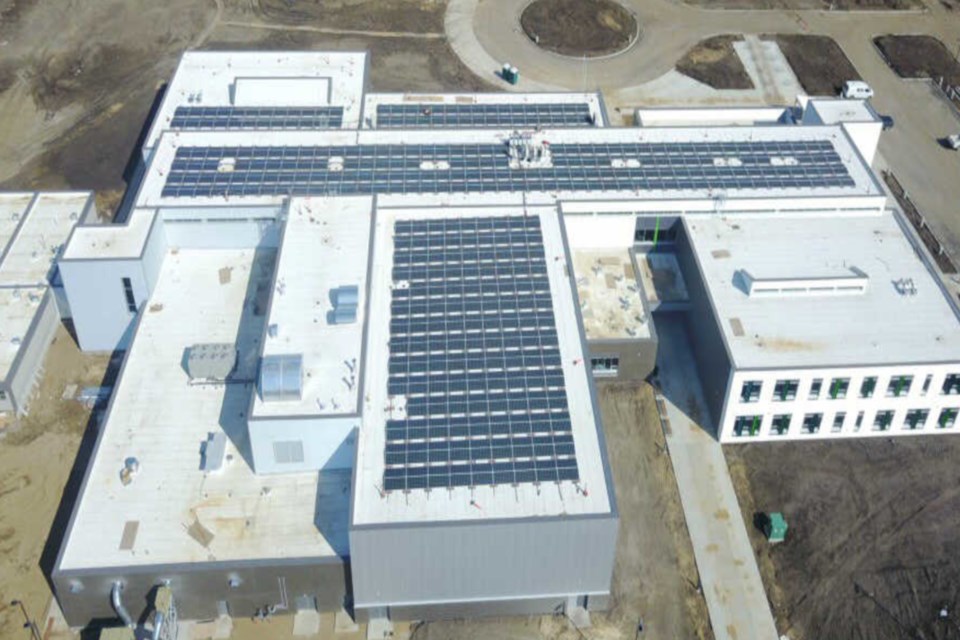 The massive solar array on top of Edwin Parr Composite School in Athabasca, as shown in this 2018 photo, has saved the institution $53,000 over the past 27 months. The panels are expected to last 25 years and were funded with a provincial grant for $672,000. File

ATHABASCA — The bright light over Edwin Parr Composite School (EPC) in Athabasca is paying out in savings — $53,000 over the last 27 months, to be precise.

That is the amount Aspen View Public Schools (AVPS) has saved on energy costs in a little over two years due to the 292 kW, 10-inverter solar array installed on the school's roof in 2018, secretary-treasurer Aimee Hirtle told trustees at their March 25 meeting.

“I wanted to apprise the board we're about 27 months, about two years into the EPC solar project,” said Hirtle. “So, I wanted to give the board a bit of an update just so that you're aware of how that is working and benefiting the division,” she said, adding the amount of power being generated covers over 30 per cent of the facilities usage.

As part of the construction of the new building, trustees at the time, under then-chair Dennis MacNeil, lobbied the provincial government at the time to include EPC on its list of 36 schools across the province selected for the project.

“This is an exciting announcement, as it means the new EPC will be a showcase for solar energy potential in rural Alberta,” said MacNeil in the press release at the time. “This underscores our confidence that the new EPC will be a flagship school within the province for many years to come.”

And now just over two years later, the fruits of the labour of 789 400-watt panels are paying off in a big way.

“So, Aspen View did not put anything into that project,” said Hirtle. “The panels have been active for about 27 months and the savings slash earnings total about $53,000 to date. So, when you figure that out, it's about $23,500 per year. And the amount of power being generated is about 33 per cent of the power that that school is using in our division.”

The panels are expected to last 25 to 30 years and after normal degradation will still have about 80 per cent capacity as they near end-of-life.

“We don't really know what maintenance costs are going to be on the project at this point,” she said. “To date, we've had one broken panel, but being on the roof, hopefully there shouldn't be much,” she went on to say.

Trustee April Bauer asked if the 33 per cent was only on occupied months and Hirtle clarified it was over the entire year.

“So, on a regular bill, Miss Hirtle, do we actually see the power that is the solar power?” Bauer asked. “Is it indicated on that itemized bill so we can actually kind of get an idea?”

Hirtle explained the bill shows net usage and if the school actually does use less power than what is generated it will show as a credit, but that is rare.

“Through the summer months there are days that we actually generate more than we're using, and that gets sold back to the grid and we do see that credit on our bill,” she said.

Hirtle added there is a small fee for when solar power is sold back to the grid however.

“There is a very small charge that ranges from half a per cent to two per cent, depending on how much that month is sold back to the grid,” she said.

“I just want to say the savings are higher than I thought they would be also. That's almost $2,000 a month. It is a lot more than I thought it would be and I’m glad we didn’t have to pay for it,” she said.