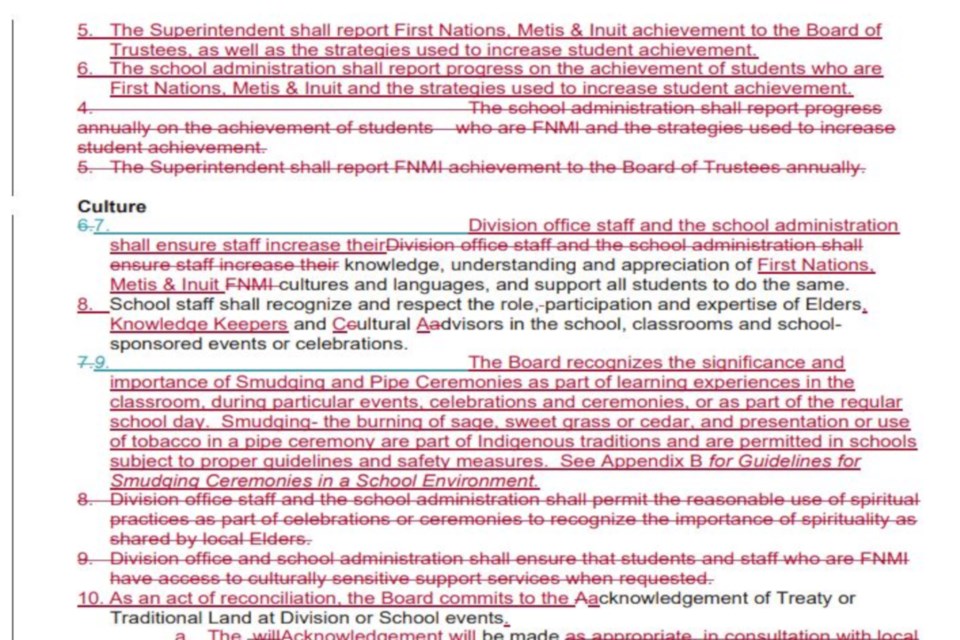 That is the first paragraph of Aspen View Public Schools newly overhauled Policy 32, First Nation, Métis and Inuit Education, that recently received a comprehensive makeover and was presented for first reading at the (AVPS) board of trustees meeting March 25.

“I'd like to start by thanking (deputy Supt.) Dr. (Karen) Penney so much for the exceptional work she's done on reviewing and revising this policy for us; she put a lot of time in,” said trustee April Bauer. “There is a lot of red in there and she has taken the time to clearly articulate our vision as the board in what we wanted to see within this policy.”

Using the Education Act as a guiding document and her own work with Indigenous people Penney made several suggestions to update the policy.

“Notably, ‘FNMI’ is not used anymore,” chair Candy Nikipelo said. “We use the entire ‘First Nations, Métis and Inuit Education.’”

Bauer added the word ‘Aboriginal’ has also been replaced with ‘Indigenous.’

Trustee Donna Cherniwchan asked if the word Indigenous is only used for First Nations people or if it encompassed Métis and Inuit as well to which Bauer explained it is proper to say Indigenous quoting a definition Penney added to the policy.

“’In Canada, there are three distinct peoples referenced as Indigenous. They are First Nations, Métis and Inuit, each with their own unique histories, languages, cultural practices and spiritual beliefs,’” said Bauer. “So, trustee Cherniwchan my interpretation of that is, instead of saying ‘FNMI’ or drawing it out to ‘First Nations, Métis and Inuit’ we can use that blanket term of Indigenous.”

Trustee Nancy Sand said she appreciated that "educational programming would also provide opportunities for staff, students and the community to develop a greater understanding and appreciation of Indigenous experiences," as is laid out in the new draft policy.

“It also speaks to our commitment as a division in expanding the knowledge around Indigenous peoples and our commitment to truth and reconciliation and how we're pushing the division toward that goal,” said Bauer.

Supt. Neil O’Shea added he felt it was important to note the Truth and Reconciliation Commission report was also used as a reference when updating the policy.

“I also want to draw reference to the fact that we have included Truth and Reconciliation, the Commission's report, the 94 Calls to Action, as one of our references at the end, which is also very important,” he said. “That we're looking to that and not just the Education Act with other pieces of legislation, but the fact that we're also working with the 94 Calls to Action.”