What it will look like will depend largely on the province and public health restrictions, but BMBA president Mike Roszko is hopeful the vaccination program and potentially lower case counts and hospitalizations will mean a season that is as close to normal as possible
Apr 8, 2021 11:30 AM By: Barry Kerton 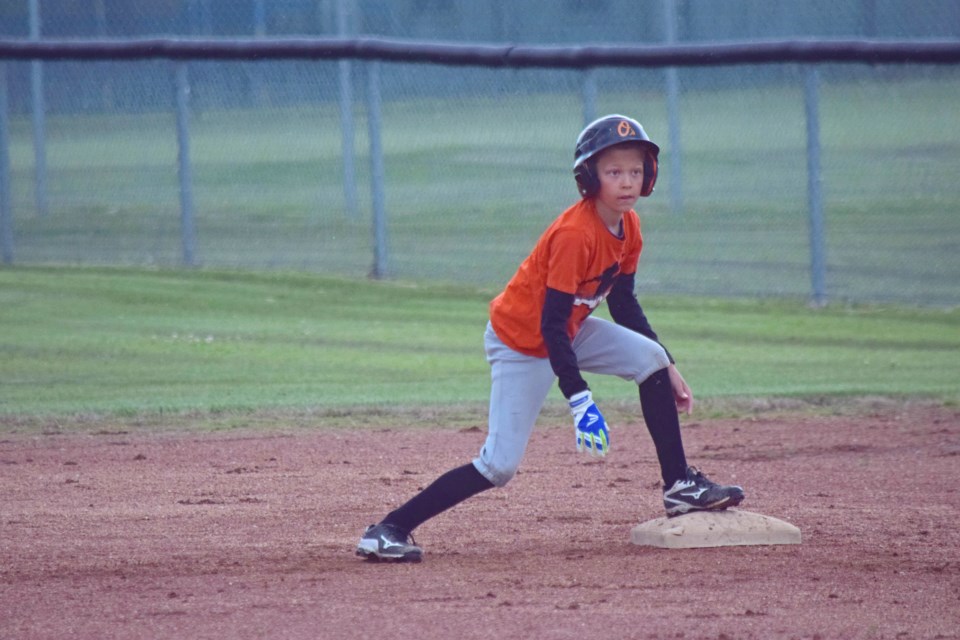 Kohen Rau watches for his opportunity to steal second base during a July 2020 baseball mini-tournament game. The BMBA is hoping that public health restrictions this spring and summer will allow its members not only to play baseball but have something close to a regular season.

BARRHEAD-Whether or not Barrhead area youth will get to play baseball and what form it will take will largely be up to the province and public health restrictions.

However, if there is a way the Barrhead Minor Baseball Association (BMBA) can help youth have some fun and develop skills, they will find a way to hold a season.

"We were not sure how it was going to go this year. Were people going to be too risk-averse to try to get involved in a sporting activity? Or if everyone was going to be so sick and tired of being locked up at home that they would be just looking for anything where they could participate outside with other people?" BMBA president Mike Roszko said.

"It has been a little slower than other years, but given the uncertainty because of COVID-19, that's not bad.
As of March 29, two days before the registration ended, more than 100 players registered across for both baseball and softball combined.

The BMHA, if things go as they have in past years, expects a wave of last-minute registration.
"We really won't know what we have to work with until a few days after registration ends and have a chance to see what our numbers look like," Roszko said.

Even if the association does not see a last-minute rush in registrations they have enough to field several teams on both the baseball and softball side.

As for what the season will look like is anyone's guess, he said.

"It worked surprisingly well. We had some great games, all the kids seemed to have fun - all things considered, it was a success," Roszko said. "However, this year we are hoping to have something that looks closer to normal as more people are vaccinated, and cross our fingers, our case numbers and hospitalizations will improve to a point where we can start planning normal seasons again."