Looking back at the year in news in Barrhead-Part 2 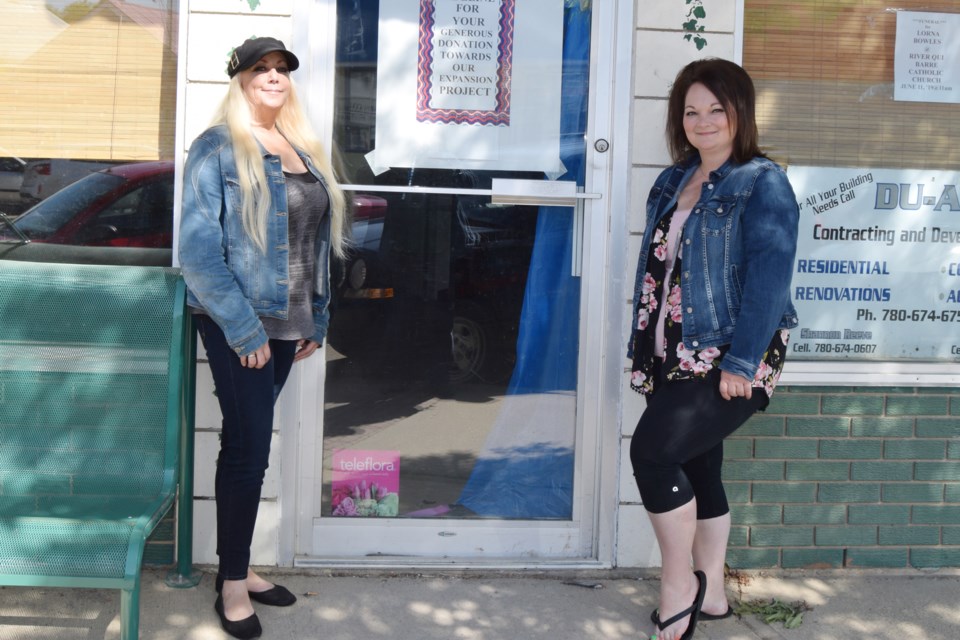 In June the Barrhead Leader talked to Ripple Connection Support Centre executive director Tracy Whitten and board chair Kristi McKort about their efforts to expand the not-for-profit organizations services and space.
Every year the Barrhead Leader editorial staff looks back and takes snippets out of what we feel are the best, most important or interesting stories. Here is what we selected for 2019. In this instalment, we look at news stories from May to August.

The future of a Calgary-based natural gas exploration company’s wells and office in the Fort Assiniboine area is in doubt after the corporation ceased operations last week.

On May 1, Trident announced it would hand over the care of its 4,700 wells to the Alberta Energy Regulator (AER).

The board of directors also resigned and all 33 of its employees, including 61 contractors, were terminated.

A media release from Trident stated that its abandonment and reclamation obligations are estimated to be $329 million and it doesn’t expect any financial recovery for shareholders or unsecured creditors.

Shannon Paluch is making the best of his second chance.

When the autobody technician at Grizzly Trail Motors was attending Barrhead Composite High School (BCHS), he had previously qualified for the 2016 Skills Canada provincial competition in automotive technology by finishing fourth in the regional qualifying competition.

However, Paluch was unable to take his shot, as the Fort McMurray wildfire forced the event’s cancellation.

Fast forward three years and the Fort Assiniboine native recieved yet another chance to go to the Skills Canada provincial competition at the Edmonton Expo on May 9-10, this time as a car painter in the post-secondary category where he took home gold.

Until recently, 20-year-old Neerlandia native Peter Viersen had no inkling that he had any latent abilities as an electrician.

Not only does he have these skills, it turns out that he is one of the most talented electricians in the province, as his recent performance at the Skill Canada Alberta competition on May 9-10 proves.

On May 10 at the Edmonton Expo Centre, Viersen took home the gold medal in the post-secondary electrical installation category after two days of competition.

Skills Canada is a non-profit organization whose purpose is to expose students to the trades as a potential career.

By winning gold, Viersen earned the right to compete at the national Skills Canada competition in Halifax on May 28-29.

Barrhead to get off-leash dog park

Barrhead dog owners will finally have the opportunity to allow their dogs to go for a run when it opens an off-leash dog park.

Councillors voted 5-1 on May 14 to convert the area behind the baseball diamonds on the Barrhead Sportsgrounds to a dog run as part of a pilot project to determine the viability of a permanent off-leash park.

Mayor Dave McKenzie said the town has received many requests for an off-leash dog park and the proposed location gives them a chance to see how receptive nearby residents and dog owners would be.

Town of Barrhead drivers will have to bone up on the rules of regarding four-way stops, at least if they plan to drive on Main Street (51 Avenue).

On May 14, councillors unanimously voted to remove the town’s stop lights at the intersection of 51 Avenue and 50 Street.

Public works estimated the cost to convert the intersection to a four-way stop would be about $2,000.

That would include the costs of installing the signs, sidewalk repair and the proper removal of existing traffic lights. Work on the project will begin this summer.

In the information package, it notes the existing lights are an old design and are becoming increasingly difficult to repair due to the availability of parts.

Mayor Dave McKenzie said that regardless of the maintenance issue, the traffic lights pose a significant safety hazard.

The Ripple Connection Support Centre (RCSC) announced they were desparately in need of help if they were going to be able to expand not only their services but their building.

The not-for-profit organization, which opened in 2010, provides services for people who directly suffer from mental illness as well as their families and caregivers.

The centre is in the process of a projected $110,000 renovation in order to expand. The RCSC is located on Main Street in the back of what was the Flower Lane building. In the last year, they have taken over the entire building.

As part of the renovations, board chair Kristi McKort and executive director Tracy Whitten said they hope to expand the centre’s kitchen capabilities, as well as to expand their restrooms to include shower facilities.

Is Junior ‘A’ hockey coming to Barrhead?

While the initial response from the Town of Barrhead was an enthusiastic “yes,” it seems there are a number of questions that councillors need an answer to before they decide to pursue the possibility in earnest.

During the June 11 council meeting, Town of Barrhead CAO Edward LeBlanc said the municipality was approached by the Western Provinces Hockey Association (WPHA) in May asking if the municipality would be interested in having a franchise.

Two Barrhead Regional Fire Services (BRFS) firefighters will be joining the efforts to control the provinces’ efforts to fight the wildfires in northern Alberta.

On Sunday, June 23, deputy fire chief Ted Amos along with Capt. Leo Knol received the call to go to High Level to fight in one of five active wildfires in the area via an e-mail from Alberta’s Provincial Operations Centre (POC).

The POC is part of the province’s emergency management system and serves as a central point for the collection, evaluation and dissemination of information concerning single or multiple incidents across the province.

Within a few hours of receiving the call, Amos and Knol were in Engine 5, making the seven-hour drive to High Level.

While the Town of Barrhead is seemingly on board with welcoming the Western States Hockey League (WSHL) to the community, it remains to be seen whether the residents themselves are supportive of hosting a Junior ‘A’ hockey franchise in the 2019-2020 season.

On July 9, town councillors received a presentation by WSHL commissioner and president Ron White regarding the proposed franchise, which if all goes well will be starting up in mid-October.

Later, they passed three motions granting the WSHL exclusive use of a dressing room at the Barrhead Agrena, establishing a rental rate of $80 per hour for adult hockey practice prior to 6 p.m. on weekdays and establishing a 70/30 revenue-sharing agreement with the league regarding advertisements on arena boards/the ice surface.

On July 10, White hosted a public meeting within the front lobby of the Barrhead Agrena to answer any questions from residents and to impress the need for volunteers to help run the team. Only six or seven people actually turned out for the session.

About 25 people turned out to an open house in Fort Assiniboine on Aug. 6 where Woodlands County councillors attempted to clarify what the municipality was seeking in its funding negotiations with the Town of Whitecourt.

Up until summer, Woodlands and Whitecourt had a cost-sharing agreement in place that allowed them to split the expenses associated with certain essential services that benefited both municipalities, including police and fire departments and the Family and Community Support Services (FCSS) program.

The county terminated these agreements back in June, prompting the town to threaten cancellation of the water/wastewater agreement that allows for the Whitecourt Airport to be supplied with water.