Looking back at the year in news in Barrhead-Part 3 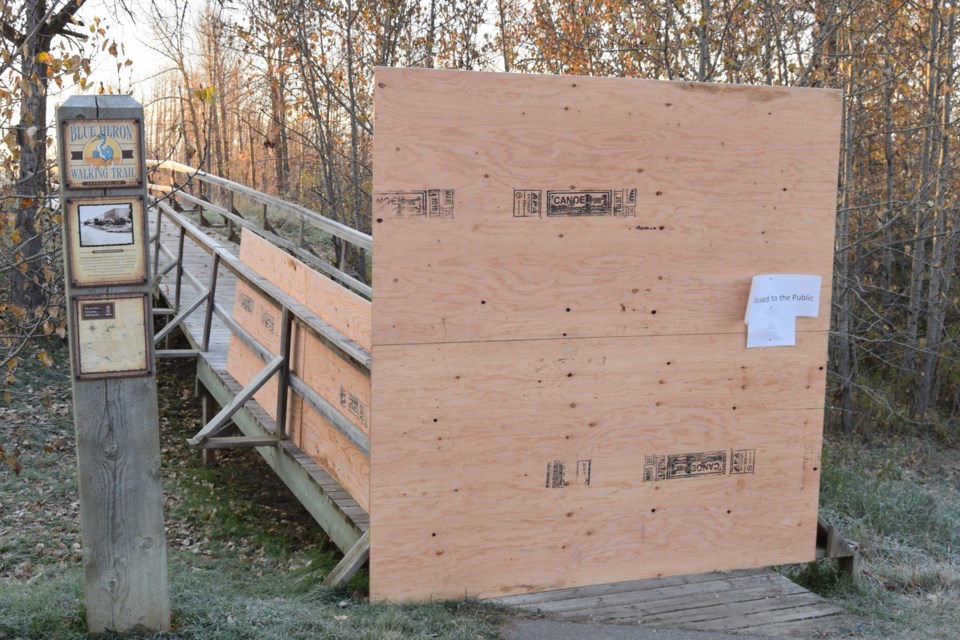 In October the Blue Heron Walking Trail's board walk was closed after an engineering firm deemed it unsafe. Barry Kerton B/L

Every year the Barrhead Leader editorial staff looks back and takes snippets out of what we feel are the best, most important or interesting stories. Here is what we selected for 2019. In this installment, we look at news stories from September to December.

The County of Barrhead has been selected as one of the sites for a three-year pilot program to help reduce the amount of agricultural plastic that ends up in Alberta landfills.

That is what county manager Debbie Oyarzun on Sept. 3 told councillors as part of her regular report.

In the winter, the then NDP government approved $1,000,000 in funding for the Agricultural Plastics Recycling Group’s (APRG) pilot program to recycle grain bags and twine.

The County of Barrhead along with its partners, Westlock County, Westlock Regional Waste Management Commission, Woodlands County, the Municipal District of Lesser Slave River and Neeralta Manufacturing Inc. were one of more than 50 groups vying to be one of 20 sites.

Thunder Lake residents have their say

It seems a large portion of Thunder Lake residents are unhappy with the state of the municipal public reserves around the lake.

And it isn’t because of the same reason.

That is what County of Barrhead staff found out during an Aug. 29 public engagement session at Lightning Bay Community Hall.

The purpose of the session was to not only inform area residents about the rules and regulations governing the county’s municipal public reserves but to allow them a chance to voice their opinions on what they see for the public land for the future.

County manager Debbie Oyarzun said the session was the first in several fact-finding meetings in which administrative staff and council will use to help to revise the county’s Public Reserves Bylaw (Bylaw (50-85) as well as help form a community standards bylaw.

If at first, you don’t succeed, then try, try again.

The proverb, first penned by British author Edward Hickson in one of his poems Moral Song in the late 1800s, has been a source of inspiration for people worldwide.

It is also a phrase Art Mantey took to heart when he met the love of his life, Talita.

“She was a waitress at the Dallas Hotel and I asked her if she would like to go for a coffee,” he said.

Talita politely turned him down, saying perhaps some other time.

Undaunted, a few weeks later Art asked her out again. This time she agreed.

The pair would go on to date for two years before getting serious and married on Sept. 4, 1954.

For the most part, Talita agreed with her husband on how the pair met, but as she remembers it, Art asked her to go for ice cream and not a coffee.

The Barrhead RCMP know there is a crime problem and they are doing their best to address it.

That is what Barrhead RCMP Detachment commander Sgt. Bob Dodds told a standing-room only audience at the Seniors’ Drop-In Centre Sept. 25.

Dodds called the meeting to answer questions and quell residents’ concerns over what is perceived as a growing crime problem.

“It is a problem. I’m not going to tell you it isn’t,” he said, noting both person and property crimes have increased in the last year. “But we are doing everything we can to lower that number.”

Unfortunately, he said it isn’t easy given the detachment’s resources and legal constraints.

He said person crimes (those committed directly against an individual, such as assaults and threats) have gone up 22 per cent from Jan. 1 to Aug. 31, over the same time last year.

“Our numbers are low [number of person crimes reported], so relatively few crimes can make a big impact,” Dodds said.

Property crime also took a marked increase over last year going up by 10 per cent, making the statistic the second-highest its been in five years.

Neerlandia lagoon is nearly at capacity

Neerlandia residents may soon no longer have a pot to do their business in.

At least they won’t if they are connected to the County of Barrhead’s sewer system in the hamlet. That is because the hamlet’s one-celled lagoon is nearing capacity.

However, councillors are now one step closer to solving the problem and increasing capacity after they unanimously authorized Associated Engineering to come up with an expansion plan for the Neerlandia Lagoon.

As part of the plan, Associated Engineering would conduct all the prerequisite geotechnical studies. Council put a limit of $73,700 for the engineering firm to do the work.

The move means the council has abandoned the idea of using technology to expand the life of its current lagoon.

County manager Debbie Oyarzun said they were first alerted, that the lagoon was nearing its capacity about two years ago.

There’ll be no more people walking above or falling in love under the Blue Heron Boardwalk, as the Town of Barrhead has opted to tear down the local landmark due to safety concerns.

On Oct. 8, town councillors unanimously instructed administration to demolish the boardwalk after they accepted a report by Associated Engineering as information.

Council commissioned the report as part of its 2019 budget deliberations and allocated $20,000 within the capital budget to conduct the study.

The report, which is dated Aug. 22, stated the boardwalk does not meet the 2014 Alberta Building Code. Due to the “significant number of elements that are under-designed,” the firm recommended that the structure be closed and be “demolished as soon as possible.”

Chief administrative officer Edward LeBlanc said that in consultation with the town’s legal counsel, he decided to close the boardwalk.

“(Our lawyer) said that when you have documented recommendation from an engineer to close a structure to the public and demolish it, you do exactly that,” he said.

That was the consensus of County of Barrhead councillors at their Oct. 15 meeting as they unanimously voted to write off $2,025,142.21 in tax revenue and penalties.

County manager Debbie Oyarzun said the demise of these companies and some recent court decisions that have made municipalities unsecured creditors — most notably the Alberta Court of Appeal’s decision in the case of Northern Sunrise County versus Virginia Hills Oil Corp. —have made it nearly impossible to collect the monies that are owed.

“We’ve done a lot of digging around to see what is available to us in an attempt to recover as much of these dollars as possible and have determined it is time to apply for PERC and DIRC,” she said.

[Editor’s note: It was Dr. Wray’s wish to keep public acknowledgements to a minimum. We hope with this story we kept the spirit of his wishes while recognizing his contributions to the community.]

Barrhead is in mourning after learning the loss of one of the community’s longest-serving doctors.

Dr. Marvin Brent Wray passed away peacefully in his home on Nov. 13.

Wray came to Barrhead in the early 1970s after graduating from the University of Alberta and completing three years of residency at the university’s hospital.

The pair worked together at the Barrhead Clinic as well as the healthcare centre. Kallal would often serve as an anesthesiologist for Wray when he was performing gynecological surgeries or performing a cesarean section.

The seniors who regularly use the Barrhead Senior Citizen’s Drop-in Centre came together on Dec. 6 to celebrate the installation of a new 20-kilowatt (kW) solar array at their facility, which will provide as much as 85 to 95 per cent of the building’s electricity needs.

“It is a day to celebrate, a day we officially start using solar power at the drop-in,” said Eldon Krikke, president of the Barrhead and District Senior Citizens Society.

The installation of the 58-panel solar array, which occurred over the summer, was commemorated with a ribbon-cutting ceremony on Dec. 6 attended by the various partners in the project.