Mastering the art of speaking 900 times 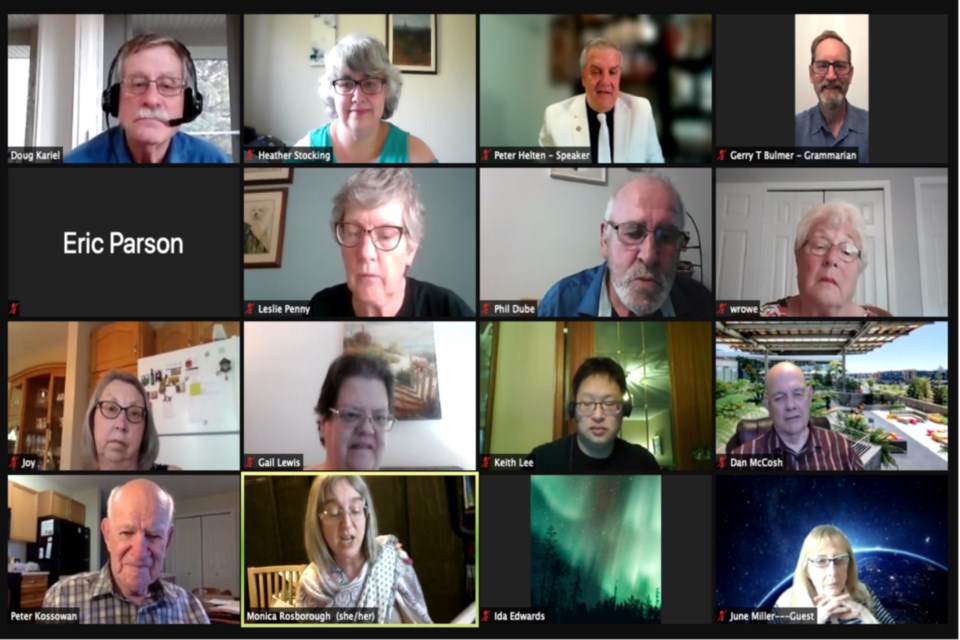 It was an online celebration but a celebration nonetheless as Athabasca Landing Toastmasters hosted meeting 900 on June 2 which included special guests and members from other Toastmasters clubs.Screenshot/Heather Stocking

ATHABASCA — It’s that moment some people have nightmares about, standing up in front of a crowd and giving a speech and the term for it is glossophobia – a fear of public speaking.

Some people are natural-born speakers, but most people either avoid even giving a brief toast at the wedding of loved one, or they face their fears and race through a prepared speech with their eyes glued to the page. It is possible to overcome that discomfort though, as every member that has attended even one of the Athabasca Landing Toastmaster Club's 900 meetings since 1987.

That 900th meeting of the group took place over Zoom June 2.

“I think there was some research that suggested that the average (Toastmasters) club exists for about five or six years and then they almost have to reinvent themselves because most Toastmasters – they know what they want to get out of the Toastmasters program – once they reach their goals they will often back away or not get involved say at the national level or even the provincial level, the district level, the higher up levels,” said member Monica Rosborough.

And while Rosborough has been a member of the local club for two years, Doug Kariel and almost-founding member Gerry Bulmer – who joined a few weeks after it was incorporated – are still active members.

“I'd never been exposed to Toastmasters, but I knew about the program and I knew the value that it offered coaching people and teaching them,” Bulmer said. “So, once I realized that there was something like that in our little town of Athabasca, I thought this was great, I want to be part of it, I want to support it, because I know the value it has to offer to others in the community.”

Bulmer even turned that learning into a job with the Athabasca Advocate under then-publisher Ross Hunter who is now the communications officer with Aspen View Public Schools. After submitting an unpaid weekly column about the benefits of Toastmasters for several weeks Hunter offered him a job.

“It was two years,” he said. “I started as a reporter; I had no experience other than the columns that I had been writing and so, they coached me along to write in the appropriate manner for a newspaper.”

Bulmer, who describes himself as introverted, credits Toastmasters with being able to interview people.

“I don't like to be out in the front of things,” said Bulmer. “So, to be a reporter for a local community newspaper was a huge step for me, but it was one of the best experiences of my life working for the Advocate.”

And getting to 900 meetings is a big deal. Toastmasters own statistics show clubs last the longest in larger urban centres with a draw of 10,000 people or more.

“We're so proud of that,” Bulmer said. “We have a beautiful town, great people and a community of volunteers and people who work together on so many things and so we have a great town, but it is a small town. And so, you wouldn't expect that a club like that, that likes to draw in larger numbers, would be able to survive.”

Bulmer and Rosborough credit Kariel with keeping the club going.

“Doug Kariel, he's been a big factor in keeping the club going and inspiring and educating others and coaching and encouraging others to stick with it and stay with it,” said Bulmer.

And building powerful leaders is what sustains the group even in a small town, Bulmer said.

The club meets every Wednesday evening on Zoom right now and will adopt a hybrid format once the pandemic ends, and new members are always welcome.