Mayerthorpe council not ready to pull trigger on mask bylaw 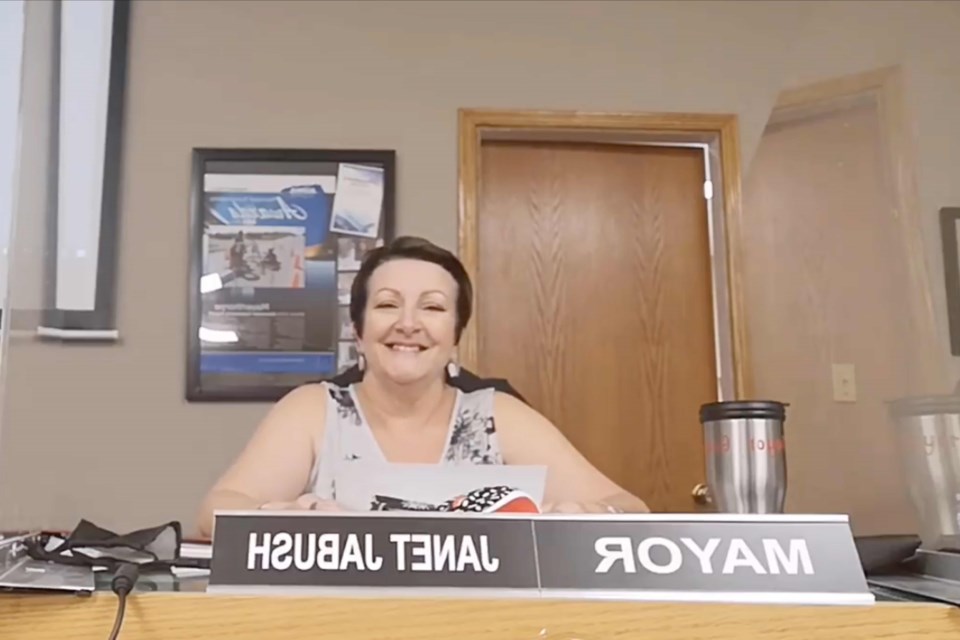 Mayerthorpe mayor Janet Jabush seen here during one of her live video updates said the municipality has a mandatory mask bylaw 'locked and loaded' should council feel it necessary.

BARRHEAD-The coronavirus pandemic is a time that should be bringing people closer (figuratively), but instead, in some ways, it is doing just the opposite.

That is what Mayerthorpe mayor Janet Jabush told the Barrhead Leader about the discussion the municipality and residents of the community are having about the potential of enacting a mandatory masking bylaw or whether residents should wear a mask when out in public.

"As horrible as the pandemic is, another symptom it has caused is the division that the debate over masks has caused in our communities," she said. "It is really unfortunate because communities that have banded together and have remained united in other major circumstances and tragedies are being torn apart. It has caused division in communities, families."

Currently, Mayerthorpe doesn't have a temporary mandatory mask bylaw, however, they have one "locked and loaded" if council deems one necessary.

On Aug. 24, in a close 4-3 vote, councillors gave first reading to a mandatory mask bylaw which would require people to wear a face-covering when in public spaces.

Jabush said the bylaw is similar to several other municipalities who have enacted a mandatory mask bylaw, or who have, like Mayerthorpe have them on the books in some other way, waiting until council deems it necessary. As with those other communities, Mayerthorpe's version includes exemptions to those who have to wear masks, such as young children and those with medical issues preventing a face covering.

At the time, council gave first reading to the bylaw the region had relatively few active cases of COVID, however, since then the numbers have ballooned.

Mayerthorpe is part of Alberta Health Service's Lac Ste Anne when it comes to tabulation for the number of reported COVID-19 cases. As of the end of the day on Nov. 19, Lac Ste Anne had recorded 89 COVID cases, 22 of which were active. Sixty-three people have recovered from the virus and there have been four deaths. In addition to Mayerthorpe, the region includes Lac Ste Anne County, Onoway, Darwell, Alberta Beach and several summer villages.

Despite the numbers, Jabush said the vast majority of the municipality's numbers have been contained mostly to the extended care facility, owned by Extendicare Inc. The facility has been in the news recently due to an outbreak at the extended care facility where it was reported that 14 residents and seven staff members tested positive for the virus. Two COVID related deaths have been reported at the facility.

In early September, the municipality polled residents asking them their opinion about a possible face covering bylaw. More than 700 residents responded, with 15 per cent agreeing with enacting such a bylaw. Another 32 per cent said a bylaw should only come into effect if the town met a specific threshold of cases.

Jabush said the outbreak at the extended-care facility might have changed some people's opinions about enacting the bylaw, including councillors themselves.

"I think it might have created some uncertainty on council, but those who remain in opposition to any type of mandatory measure are pretty firm in their conviction."

Jabush added she was disappointed at how the province has left decisions such as mandatory mask bylaws in the hands of municipalities.

"From the [municipal elected officials] that I have spoken to there seems to be a feeling of a lack of leadership from the province," she said. "We are not medical professionals and should not be the ones in the driver's seat of whether to bring in a mandatory mask bylaw. The consensus is that everybody wishes the province would take some action and mandate a face covering requirement if that is what their medical professionals are telling them."

Alberta's chief medical officer Deena Hinshaw, on multiple occasions, has recommended that Albertans as part of precautions such as physical distancing, enhanced cleaning protocols and frequent hand washing to wear masks when out in public and when social distancing cannot be maintained.

STARS funding will go to budget meetings
Dec 3, 2020 6:59 AM
Comments
We welcome your feedback and encourage you to share your thoughts. We ask that you be respectful of others and their points of view, refrain from personal attacks and stay on topic. To learn about our commenting policies and how we moderate, please read our Community Guidelines.