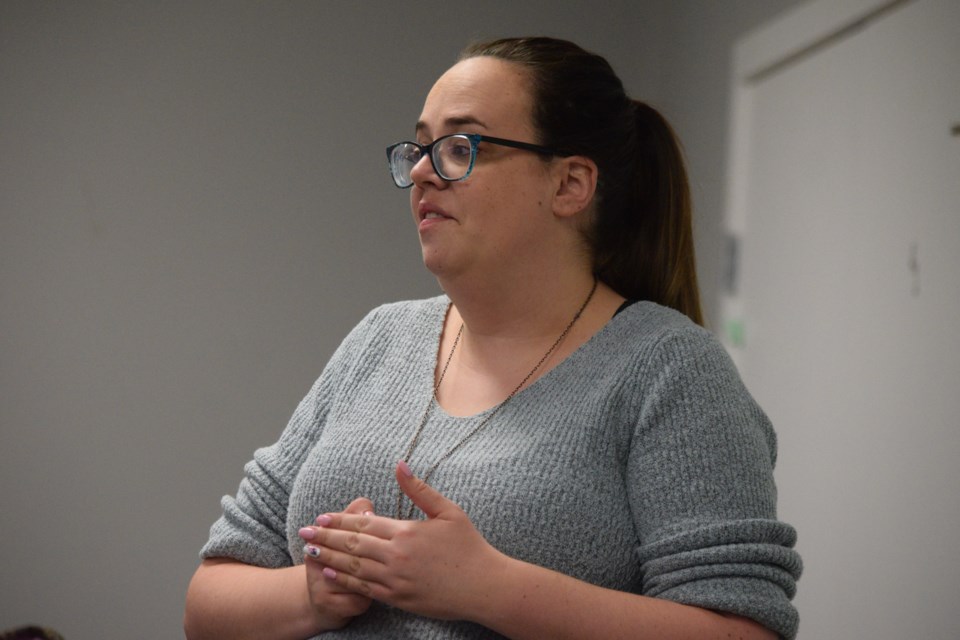 Janelle Quaife, from McMan Youth, Family and Community Services Association, was one of the facilitators of a two-hour rural mental health workshop in Barrhead on Feb. 3. Quaife noted that untreated mental illness can lead to drug and alcohol addiction. Barry Kerton/BL

BARRHEAD - Mental illness is an issue that impacts everyone, but is not often talked about, especially in close-knit rural agricultural communities.

But EQUS is hoping to change that in part by hosting a series of mental health workshops in partnership with the McMan Youth, Family and Community Services Association.

The association’s mandate is to provide programming for individuals and families to help them achieve their full potential.

EQUS is a Rural Electrification Association (REA) and is a distributor of electrical power.

On Feb. 3, it was in Barrhead at the Blue Heron Support Services Association building. About a dozen people attended.

Sarah Gunderson and Janelle Quaife of McMan Youth, Family Community Services Association were the facilitators. Gunderson is a family search and engagement social worker while Quaife is a youth worker and foster care support worker.

Every year EQUS raises money, largely through a charity golf tournament, with the purpose that it goes towards projects that help the communities and residents they serve. This year EQUS chose rural mental health.

Gunderson noted the purpose of the workshops is to increase the knowledge and awareness about mental health, especially those living in rural communities and those in the agricultural industry.

She added they also hoped to help reduce the stigma attached to mental illness as well as talk about positive coping strategies for oneself and others during a mental help problem and crisis as well as sharing information about mental health supports that are available to Albertans living in small communities.

Gunderson started by defining what health is.

“The World Health Organization defines is as a complete state of mental and social well-being not only the absence of disease or infirmity,” she said. “While mental health is the capacity of every one of us to think, feel and act in ways to enjoy life and deal with the challenges that we face. It is a positive sense of emotional and spiritual well-being that respects the importance of culture, equity, social justice, interconnections and personal dignity.”

In that way, Gunderson noted mental health impacts good and bad all aspects of people’s lives.

Gunderson and Quaife went on to describe mental order is something that “causes a significant change in a person’s thinking, emotions and behaviour and disturbs a person’s ability to maintain relationships.”

They noted that mental health issues are not uncommon, noting that in Canada one in five people will experience some problem with their mental health over a year.

That number increases to one in three in their lifetimes.

“Those stats are pretty staggering because they pretty much mean that it will affect every single one of us in one way or another,” Gunderson said.

They then went on to touch on various mental health disorders, their symptoms and signs people can watch for in others.

Because as Quaife noted often people who are suffering from a mental illness don’t always realize it.

They also discussed anxiety, eating and psychotic disorders as well as addiction issues.

Quaife explained how often people with mental illnesses can turn to drugs and alcohol. The opposite is also true, she noting that an addiction issue can also lead to mental illness.

Gunderson and Quaife also spent time, with the aid of YouTube videos from the Do More Agriculture Foundation, on how mental illness can impact people in the agricultural industry.

Do More Ag is a not-for-profit organization focusing on mental health in agriculture across Canada.

One of the videos which interviewed two of the founding couples of Do More quoted a 2017 University of Guelph study conducted by Dr. Andria Jones-Bitton who surveyed 1,100 producers from across Canada and found that 35 per cent could be classified as depressed and 58 per cent met the criteria for anxiety.

Gunderson said mental illness is not straight forward and that certain factors can add to the problem, singling out stress in particular.

“The Centre of Addiction and Mental Health specifies a certain amount of stress is a normal part of daily life,” Quaife added. “That is how we get things done, but longterm stress can be harmful ... and when stress becomes overwhelming and prolonged the risk for mental health and other medical problems increase.”

Gunderson added undergoing trauma can also be a trigger of mental illness. She then listed several types of trauma from childhood neglect, sexual and physical abuse, to car accidents or being a victim of violence or natural disaster.

“When thoughts and memories stay with a person they can intensify and lead to post-traumatic stress disorder (PTSD) which can significantly disrupt a person’s ability to regulate their emotions and sustain relationships,” Gunderson said.

To make things more difficult for people suffering from mental illness Quaife said many are reluctant to seek treatment because of the stigma they feel is attached to it.

“More than 60 per cent of people with mental health problems won’t seek the help they need,” she said.

The workshop concluded with a discussion on how to create a self-care mental health plan and where people can go to seek help.

Gunderson said for those who are suffering from a mental health issue one of the best places to start looking for help is by talking to their family doctor.

“The next place to go is Community Mental Health through Alberta Health Services. They have five therapists to see children to adults and they do take new patients and walk-ins,” she said.

Business awards go virtual
Sep 17, 2020 11:14 AM
Comments
We welcome your feedback and encourage you to share your thoughts. We ask that you be respectful of others and their points of view, refrain from personal attacks and stay on topic. To learn about our commenting policies and how we moderate, please read our Community Guidelines.