Shannon Sparks’ yellow-bellied slider is now safe at home thanks to kindly neighbours
Aug 6, 2020 6:29 AM By: Chris Zwick 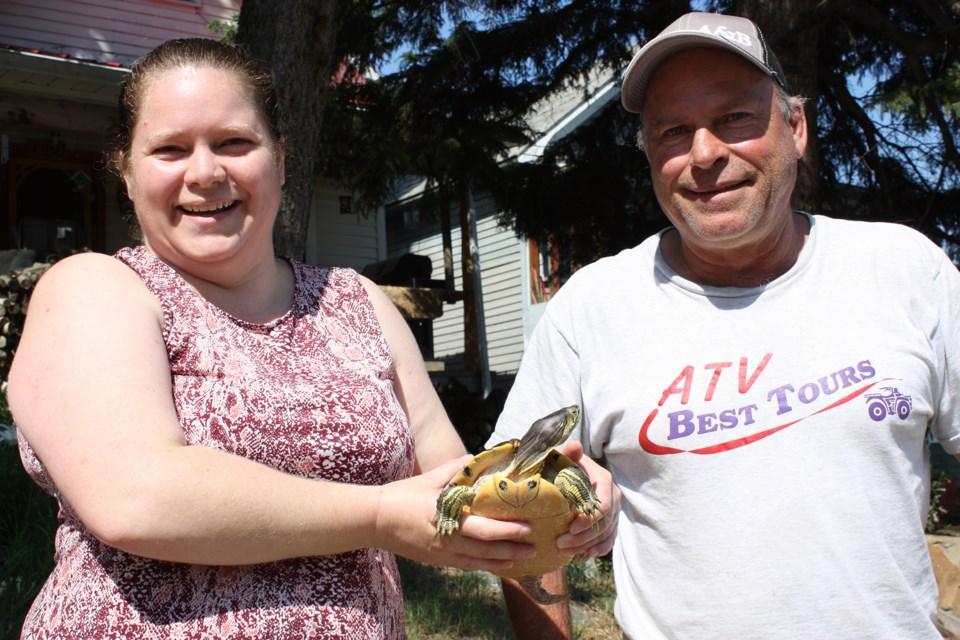 Shannon Sparks’ pet Mr. Turtle looks at John Pomerleau, one of the neighbours that rescued him from the street after he escaped and went on a tour of the neighbourhood July 25.  Chris Zwick/T&C

ATHABASCA - Turtles have a reputation as slow, languid creatures — as long as the environment is suitable, they seem content enough to munch on a piece of lettuce and hang out in their shells all day.

One yellow-bellied slider defied the norm recently though, giving his owner quite a scare.

Shannon Sparks was on Facetime with a friend July 25 and Mr. Turtle was out of his tank cruising around her home on 52 St. in Athabasca — not an unusual occurrence. He’s pretty low to the ground, so an open patio door wasn’t much of a concern for Sparks. Mr. Turtle had other plans though.

“Then around 2:30 or so I went to get him and he wasn’t there, so I looked around the house and started to worry. A friend happened to send me a message just saying hello and checking in and I told her I was in a pickle and couldn't find my Mr. Turtle and she offered to help me look for him,” said Sparks.

After a few hours of searching inside and outside the home several times, her friend went home and Sparks laid down in the grass in her backyard with her dog, defeated. Mr. Turtle was 10 years old and came with her from the east coast when she moved to Alberta. She was out of ideas.

At around the same time on 53 St., Debbi Jackson happened to notice something in the middle of the road outside her home.

“I thought someone threw something out of the car, it just looked like a big glob of garbage from a distance. So I looked a little bit closer and realized, ‘That’s a turtle!’” said Jackson.

“There’s no turtles in Athabasca,” he told Jackson, as the two neighbours decided to investigate after a vehicle very nearly ended Mr. Turtle’s adventure quite abruptly.

The two found a storage container and added some water, some grass and a big rock to try to make their new friend comfortable as they tried to figure out what to do next. Not surprisingly, neither had any experience with reptiles.

Jackson reached out to the pet store for some advice on how to care for Mr. Turtle. She also enlisted a friend to create a Facebook post to help locate the owner, but didn’t think that would pan out for at least a few days.

Potential fosters started to line up quickly, but it only took a few minutes before Sparks saw the post and went looking for her pet on her own.

“I was astonished when I saw it and immediately replied and was not waiting for reply back. I walked to 53rd street to try finding the house he may have been at and I found him. The gentlemen was sitting outside on his porch and I asked him if he knew anything about a turtle being found, as I saw posted on Facebook,” said Sparks.

Pomerleau wanted to be sure Sparks was the owner though, especially with the interest the turtle received on Facebook, and asked for some kind of proof, which she provided in the form of a picture.

Apparently, the 10-inch reptile made his way through the patio door and across the deck; jumped six feet and landed on his feet; he then foraged his way through the backyard, into the alley, crossed the alley and conquered the length of another lot before ending up in the middle of 53 St. dodging vehicles and certain death. All in the span of two hours.

“I’m very happy to have found it, and to keep it safe,” said Pomerleau. “I was on my way to the store to get some watermelon and some raspberries … I’m just happy she got her friend back, because she was worried.”

Opposition MP finds positives in Throne Speech
Sep 26, 2020 9:00 AM
Comments
We welcome your feedback and encourage you to share your thoughts. We ask that you be respectful of others and their points of view, refrain from personal attacks and stay on topic. To learn about our commenting policies and how we moderate, please read our Community Guidelines.