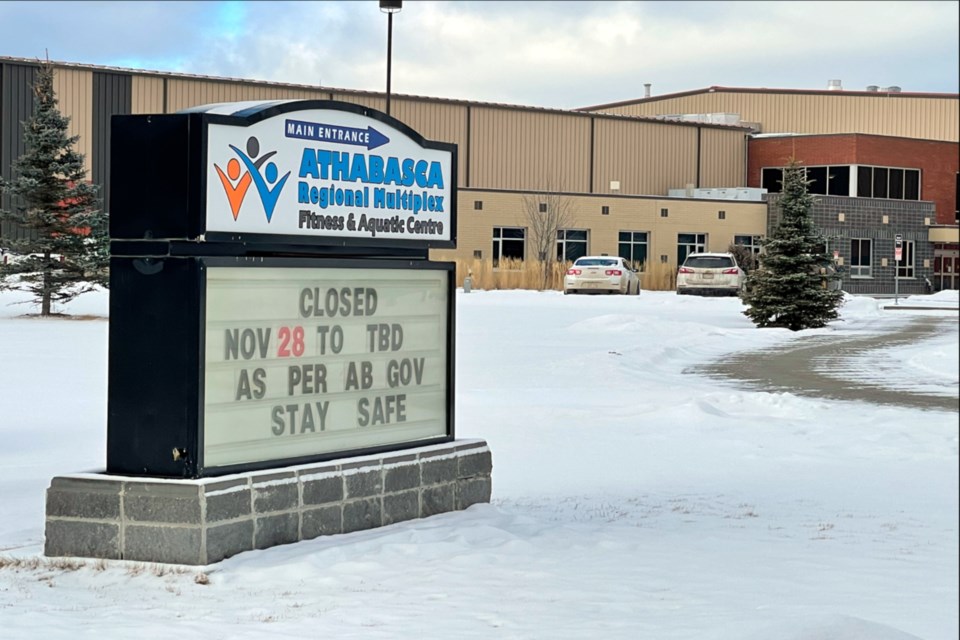 After the Jan. 21 announcement from Dr. Deena Hinshaw, the Athabasca Regional Multiplex will remain closed until further notice and will be removing the ice in the skating and curling rinks.Heather Stocking

ATHABASCA — The Athabasca Regional Multiplex, like all recreational facilities across Alberta will remain closed for the time being, and the ice will be taken out, after the Jan. 21 press conference with Alberta’s chief medical officer of health Dr. Deena Hinshaw.

Hinshaw announced the extension of the current measures for an indefinite amount of time, prompting a motion passed at the Athabasca Regional Multiplex Society's last meeting to pull the ice if another extension to the restrictions was announced Thursday, to go into effect — ending any hope of continuing with an abbreviated minor hockey season, or curling schedule.

A media release from Multiplex general manager Jennifer Edworthy soon after the announcement, relayed the message to user groups and residents.

“As information becomes available, we will make every effort to communicate to our user groups, members, and guests any changes in our status via our website, Athabasca Regional Multiplex Society Facebook page, and news releases,” said Edworthy in the release. “We appreciate the public’s patience, as we too receive our information like everyone else via the public announcements.”

Local sports groups took to social media to further spread the word to members and Athabasca & District Minor Hockey Association (ADMHA) president Dustin Pysyk said it was with mixed emotions he was forwarding the news release from Edworthy.

“So where do we go from here? ADMHA board will be meeting to finalize things now that we know our situation. I will keep you posted when a decision is made with all the information from refunds to jersey returns,” Pysyk wrote on the association's Facebook page. “On behalf of ADMHA board I would like to extend a huge thank you to all of you for registering this year and trying to make it happen.”

He also expressed condolences to the third-year U18-level players who would have been finishing their last year of minor hockey this season.

“To our third year (U18) midget players and parents, no words can express our sympathy to you on how your 13/14-year journey ends for you. Only thing I can say is I wish you the very best in your hockey career beyond ADMHA and more importantly in your personal future endeavours.”

Hours earlier a post on the same Facebook page with a message from Drew Dixon, the senior manager of member development with Hockey Alberta, said the organization has been working with officials from the Government of Alberta and Alberta Health Services to try and salvage some of the season.

“Please recognize that we still have no confirmation if or when team sports can return, but we are prepared to complete a plan that would allow our participants to hit the ice through to the end of March or April when deemed safe and when approved by AHS,” Dixon’s statement read.

More than 100,000 people in Alberta take part in minor hockey each year.

Gord Tebbenham, president of the Athabasca Curling Club, said in a Jan. 22 interview, if the restrictions had been lifted, they could have got in eight weeks of curling.

“We were hoping that some of the restrictions would be lifted, but we totally understand the reasoning behind them extending it,” he said. “And on the other side of it, we understand the situation the Multiplex is in with not having anything going on there; that they’ve got to make a decision. It is disappointing but the members understood the need for the ARM to remove the ice.”

He added depending on how the pandemic goes, if sports are allowed to resume in the fall, maybe they will have an opportunity to return a bit earlier to make up for this season.

“It's unfortunate so, we will hope for the best for next year. Yeah, we'll just kind of leave it at that,” he said. “Maybe we can start up a little earlier next year; that discussion maybe could happen, but, again, it's all dependent on where this situation takes us, I guess.”