Rinks in Cornwall and Hees Estates are ready, and residents are doing their part
Jan 13, 2021 11:23 AM By: Chris Zwick 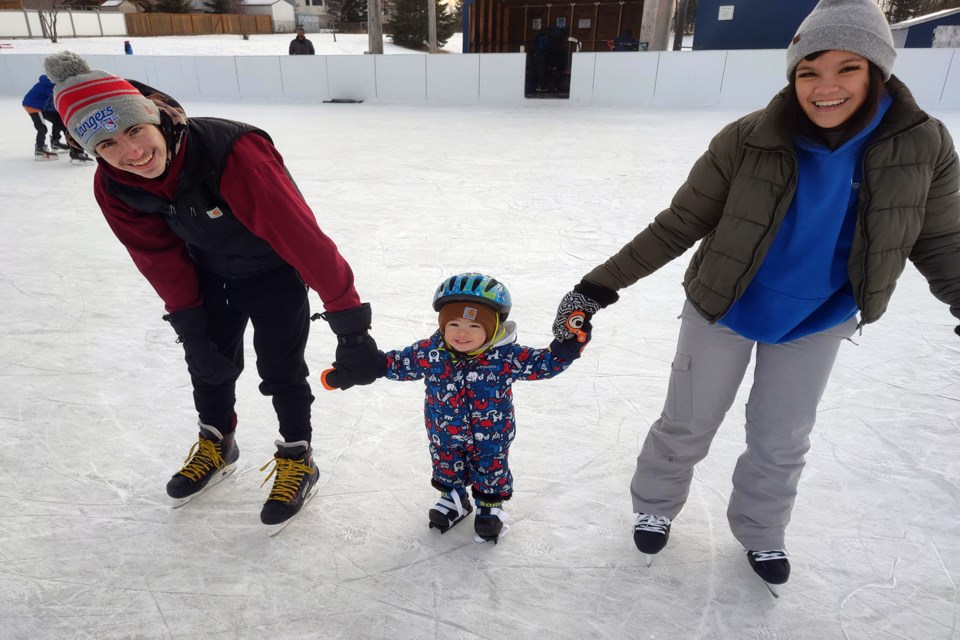 The outdoor rink in Cornwall was a busy place Jan. 10 with skaters of all types taking to the ice for a wholesome slice of Canadiana on a Sunday afternoon. They included two-year-old Isaac Hayward-Ramos who was flanked by mom Claire Ramos and dad Jacob Hayward as he put on skates for the very first time of what will likely be many more.  Chris Zwick

ATHABASCA – In 20 years, look out for the name Isaac Hayward-Ramos.

He was two-year-old when he put on his first pair of skates last Sunday, and with mom Claire and dad Jacob on either side of him, he made his way across the width of the outdoor rink in Cornwall for the first time ever. And judging by the smile on his face, it surely won’t be his last.

It’s a scene that has been playing out on frozen lakes, dugouts and outdoor rinks across Canada for more than a couple centuries — kids put on their first pair of skates before they can even talk, they fall down a few times, get back up, and pretty soon they’re competing for Olympic gold.

He might become a hockey player, a figure skater or speed skater. He might win the Olympic gold for Canada. He’ll thank his parents and his coaches, his fans back home in Athabasca, and even the person who cleared the rink before he got there to put his skates on in early January 2021. It is that much of a community affair.

In Athabasca this winter, town crews weren’t able to get the local ice surfaces in until the colder weather arrived in mid-December, but now that the rinks in both Cornwall and Hees Estates are operational, the Canadian tradition continues, and as always, the community is there to maintain it — the rink, and the tradition.

“We did manage to finally get a little bit of colder weather and managed to get the rinks on the go and ready for the Christmas break,” said public works foreman Graeme Douglas at Athabasca town council’s Jan. 5 meeting.

He was delivering the parks report on behalf of supervisor Warren Zyla, who was away, but praised the residents in Hees Estates for taking on the maintenance of that rink.

Douglas added: “Kudos to the residents of Hees Estates, they've taken that one on, completely on their own. Warren got it started and from there, everybody up there pitches in.”

Mayor Colleen Powell recalled it was the residents of Hees Estates who got that rink started in the first place. “This is probably something we should be encouraging throughout the town,” she said.