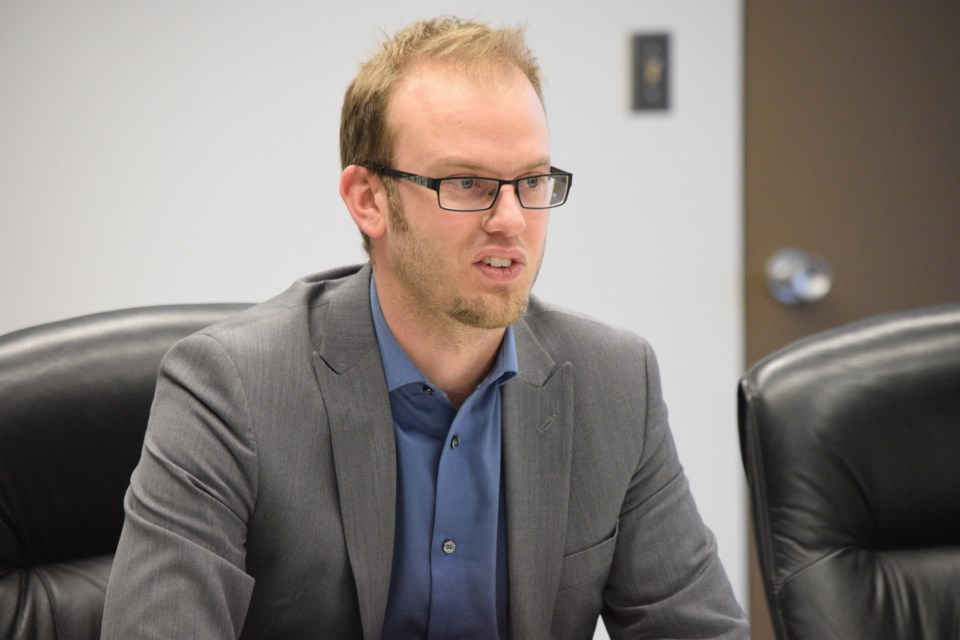 Peace River-Westlock CPC MP Arnold Viersen pictured here at a 2018 County of Barrhead council meeting, called petitions one of the oldest components of our democracy. He also noted there are strict protocols that people must follow to have an MP present a petition in the House of Commons on their behalf.

The Barrhead Leader reached out to Viersen for his reaction to a series of Enough is Enough rallies (organized by Westlock-area DJ Benita Pedersen) protesting COVID-19 restrictions in Athabasca, Barrhead and Westlock.

"Just like the farmers in India right now, I support the right to peaceful protest as it is the hallmark of democracy," he said.

During the Feb. 18 Barrhead rally, Pedersen asked attendees to sign petitions online and hard copy petitions urging the province and the federal government to relax COVID-19 restrictions. She noted that the hard copy petition going to the federal government was especially important as that every 25 signatures they received entitled the MP to speak for 30 seconds in the House of Commons.

Viersen said while that is essentially true, there are strict rules or conditions in which an MP can present a petition.

Mostly the rules are in place to ensure the authenticity of the signatories and the issue is within the federal government's jurisdiction," he said.

"The rules are that you only get to present the petition, give a short submission on what it trying to achieve ... you don't get to editorialize," Viersen said, noting he is one of the most sought-out MPs when it comes to petitions.

"Most are about the genocide of Uighur Muslims in China," he said.

On Feb. 18, the Conservatives on their opposition day put forward a motion to recognize that genocide is currently being carried out by the People’s Republic of China against Uighurs and other Turkic Muslims.

The motion passed overwhelmingly in the House of Commons with 266 to zero.

An amendment to the motion proposed by Bloc Quebecois MP Alexis Brunelle-Duceppe, calling on the International Olympic Committee to move the 2022 Olympic Games out of China if the genocide continues also passed 229 to 29 votes. The Liberal cabinet, including the prime minister, abstained from voting.

"It is very interesting that our prime minister was willing to say a genocide was happening in Canada currently in 2019. Now in 2021, it is a loaded term. Today’s vote was appalling. When in Canadian history has a Prime Minister and his entire cabinet turned a blind eye to genocide?”

The purpose of the day is to help raise awareness about the magnitude of modern-day slavery in the nation and abroad.

"It's been something I've been working towards and has been on the order paper on the last three years, certainly since the start of this Parliament," he said, adding most of the work has come as part of the all-party human trafficking committee that he is co-chair of.

However, real progress on having the motion proclaimed did not occur until he enlisted the help of his CPC colleague, MP for Calgary-Skyview Jag Sahota.

With her help, Viersen was able to get it through to the Status of Women Committee and eventually to the floor of the House of Commons.

He added that the issue of human trafficking is not limited to large urban centres, referencing his Feb. 16 speech in the House of Commons.

"Even in my large rural northern Alberta riding, human trafficking is taking place. Last summer, the RCMP charged a 30-year-old man from La Crete with trafficking a minor," Viersen said. "With so many kids online, traffickers are also adapting their efforts to lure and exploit children over the Internet."