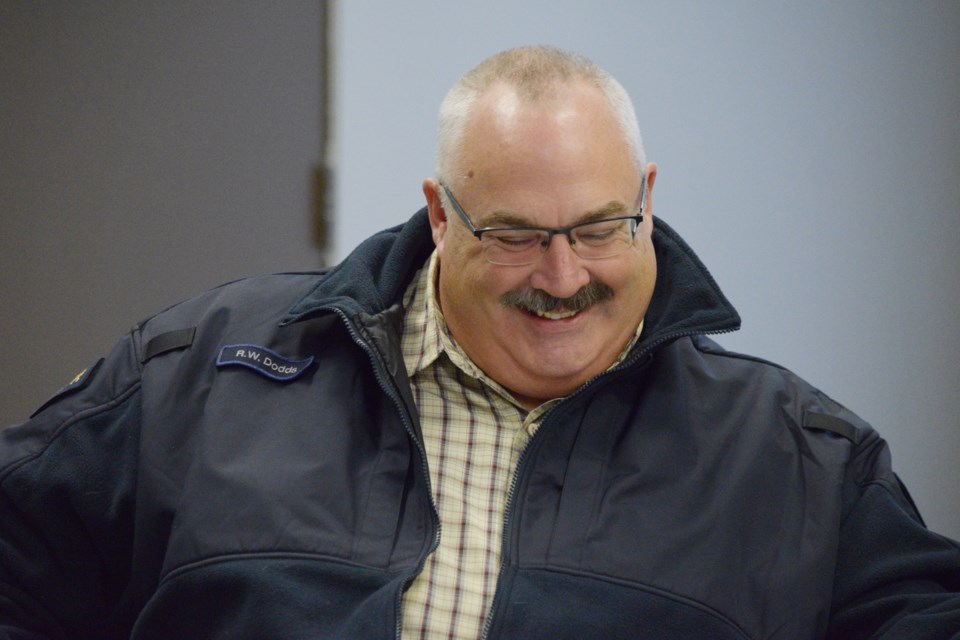 Barrhead RCMP Detachment Commander Sgt. Bob Dodds noted police had a quiet January due to the extreme cold weather the area experienced where temperatures dropped below -40 C. Dodds was at the Feb. 4 County of Barrhead council meeting to discuss the latest crime statistics. Barry Kerton/BL

Those were just some of the stats Dodds delivered to County of Barrhead councillors at their Feb. 4 meeting.

From December to January 2019, the Barrhead detachment dealt with 172 persons crimes, with 52 in the County of Barrhead — persons crimes include robbery, assault, kidnapping, extortion, criminal harassment, uttering threats and various sexual offences.

The largest category was assault with 77 files, followed by criminal harassment with 38 and uttering threats at 26.

One interesting anomaly is that the kidnapping/hostage and abduction category was at a six-year high with six complaints reported.

However, it turns out this was the result of an anomaly of how the RCMP 'K' Division keeps its statistics.

Five of the files dealt with forcible confinement, while the other was a sexual assault.

“Forcible confinement is if I want to leave the room and you stop me. There were no kidnappings or abductions, but it the five files fall under this category,” Dodds said.

He added that in all but one of those files RCMP were able to lay charges.

Dodds added in the remaining case charges could have also been laid, but the complainant decided not to proceed.

“Which is often the case,” he said. “The clearance rate on person offences is high because the police have more to work with because typically we know who punched us in the nose.”

Robbery is another category bucking the trend, being the second-highest it has been in six years with seven complaints reported.

Once again, Dodds said the high number are due to the vague definition of what constitutes a robbery.

“It can range from something as simple as someone taking my pen and they push me down to shots being fired,” he said, noting that a week prior they responded to an example of this version at the Fas Gas in Fort Assiniboine. The shot the suspect fired was into the floor.

“Based on the information we gleaned from that robbery ... we identified a suspect within an hour and he was arrested [in another jurisdiction] by the end of the week,” Dodds said, noting his apprehension could solve another 16 robberies from northern Alberta and Saskatchewan.

“It is also a reminder that these people are armed and they are willing to use a gun to get out of trouble,” he said.

Another persons crime on an upward trend is criminal harassment, with the aforementioned 38 complaints, the highest number reported in six-years.

“That is someone repeatedly watching or contacting somebody else that doesn’t want that contact. There is no physical violence in criminal harassment,” he said.

Reeve Doug Drozd asked if that category extended to harassment on social media.

“It can be. If you are contacting me over and over again and I tell you to stop and it keeps happening regardless of how the contact is happening it can be considered criminal harassment,” Dodds replied.

On the property crime side, the highest categories were theft under $5,000, break-and-enter, mischief to property and vehicle theft with 242, 138, 96 and 80 cases being reported over the 2019 calendar year. The only one that was at a six-year high was break-and-enter.

Dodds noted property crimes at the best of times are difficult to solve but break-and-enters are even more so, because often times the crime is not noticed until long after it has taken place.

Of the 138 B&Es, 54 were in the County of Barrhead. Several of those, such as ones to outbuildings or cottages, might not be reported until weeks after the crime happened.

Possession of stolen goods was also at a six-year high with 73 files generated. It is one of the statistics that Dodds would like to see even higher as that means they have caught a culprit that can sometimes be a key to solving other cases.

Coun. Ron Kleinfeldt asked about what seemed to be a rash of stolen extension cords in the area.

Dodds said they were stolen, in all likelihood, so the copper could be stripped from them and sold.

“If you steal one extension cord, it is because you need it, but 100 is for the copper,” he said.

However, he hopes a soon to be implemented law will take drastically reduce the number of copper wire thefts.

Due to a change of government, although the bill, the Scrap Metal Dealers Identification Act, was passed in the legislature it was never proclaimed.

However, the UCP government has dusted off the legislation and it is expected to come into effect this spring.

Part of the reason he believes the numbers have increased is due to BARCC.

It was formed in the spring of 2018, in part due to discussions Peace River-Westlock MP Arnold Viersen had with all parties in around initiatives to combat rural crime.

As part of the initiative, BARCC has set up a software-based system that allows the municipalities, Rural Crime Watch and the RCMP to broadcast messages via automated phone calls, e-mails, and texts.

Dodds gave the example of a BARCC alert they released on Feb. 3 asking for the public’s assistance ton locating a lifted or “jacked-up” GMC/Chev pick up truck. The truck had been reported entering people’s yards in the Tiger Lily/Mystery Lake area. The same vehicle was also reported suspiciously casing out properties in the Town of Barrhead

In this case, although they did not have success in locating the vehicle, they did push them out of the area.

He also noted that the police have received several tips after they started posting the pictures of some of “Barrhead’s most wanted” on the BARCC website www.barcc.ca.

All that being said, until real progress is made on the drug abuse problem, specifically meth, property crime will be an issue.

“We are no different than the rest of the country,” he said. “Until we find a way to resolve the meth problem, property crime will always be an issue. At best all we can do is ... continue to send people to jail, and when they get out, they will continue offending.”