Red Lions continue to roll through the NCABL 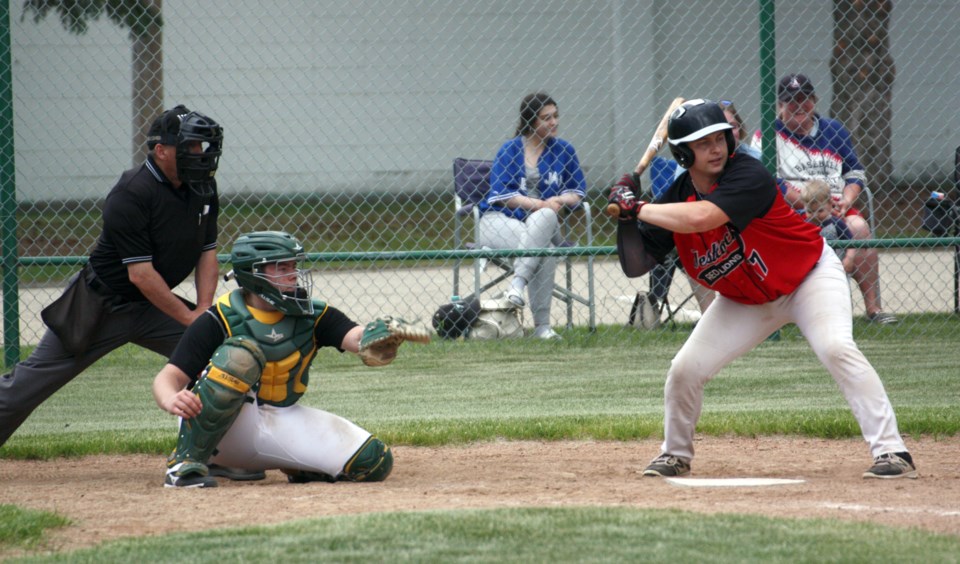 The Westlock Red Lions upped their record to 5-0-1 following a two-game sweep of the Edmonton Athletics last week. The club is slated to face the Sherwood Park Athletics this coming week, with Game 1 of the two-game set slated for Keller Field tonight, July 14, at 7:15 p.m.

WESTLOCK – In their toughest tests of the year, the Westlock Red Lions rose to the challenge and posted a pair of victories to remain undefeated atop the North Central Alberta Baseball League.

The club rolled to 3-1 and 6-5 wins over the second-place Edmonton Athletics July 5 and 7 and rule the NCABL with a 5-0-1 record. The Wednesday-night win at Keller Field was especially sweet as the Red Lions trailed 5-0 heading into the bottom of the seventh.

“There was a lot of people that were leaving in the sixth inning,” said Brand. “I had some co-workers today who were like, ‘What, you guys won? We left because you couldn’t get anything in.’” said Brand the following day. “We threatened in a few innings, but we just couldn’t cash anything in until the seventh.”

Following a lead-off walk, Brand said a combination on infield hits and errors, combined with a timely double from Nathan Brown got them within a couple of runs. With the bases juiced and two out, a double from Corson Hanlan cleared the bags and sealed the improbable come-from-behind 6-5 victory. Hanlan, along with Kris Johnson, were also key on the mound in the club’s 3-1 win over the A’s two night earlier, Brand noted.

“It was a gutsy performance from us. We had five non-starters on the field last night, so it was nice seeing some younger guys and newer teammates step up to occasion and battle back,” said Brand.

“It’s a good feeling to be 5-0-1. We obviously have a little bit more work to do. We want to get into a position where we’re not worrying about the last few games in the season. Certainly there are quite a few teams behind us right now, but things can change quickly when you have three, two-game sets against some stronger opponents.”

Now the Red Lions will turn their attention to last year’s NCABL champs, the Sherwood Park Athletics — Game 1 of the home-and-home series goes at Keller Field in Westlock tonight, July 14 at 7:15 p.m., with Game 2 the following night in Sherwood Park. The A’s, who sit with a 2-1-0 record, are a team the Red Lions know all-too-well after being swept by them in the 2020 best-of-three NCABL championship series.

“They’re the champions, so it would be nice to set them a little further back in the standings,” said Brand. “They’re a veteran club and they always give us a good test every time we face them.”