Steve Chodan was not only a teacher, but a town councillor, hockey coach and community builder
Jan 12, 2021 11:30 AM By: Les Dunford 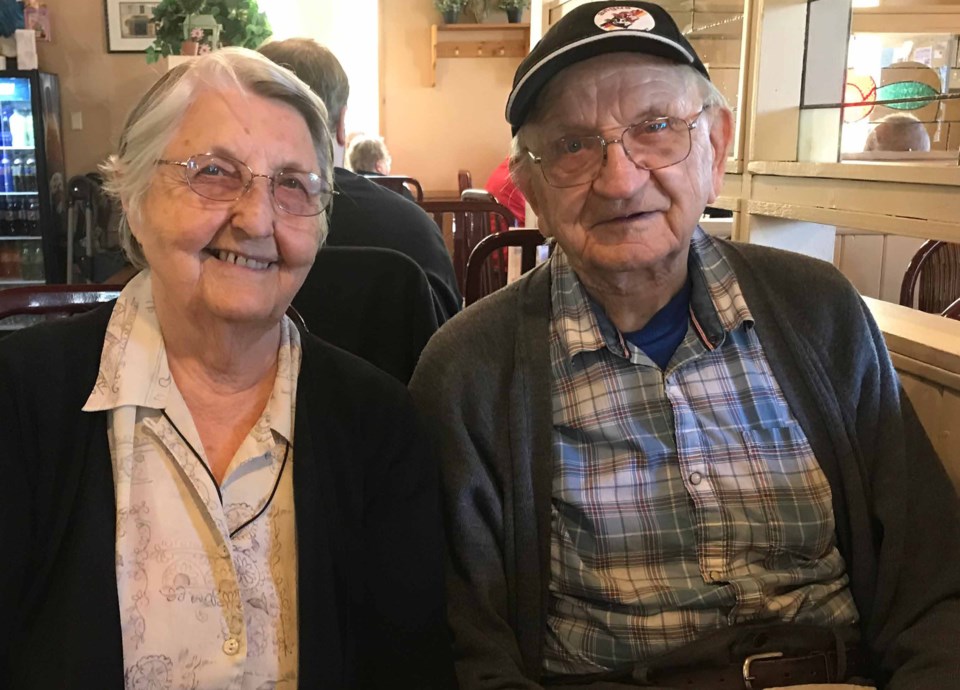 Angela and Steve Chodan in 2019, a little over a year before his passing at the age of 89.

WESTLOCK - When former Town of Westlock resident Steve Chodan passed away Nov. 28, 2020 at the age of 89 in an Edmonton hospital of COVID-19, his obituary gave a very brief outline of his life.

It barely scratches the surface of a man who gave so much to the community which was home to him for 57 years. None was done for any special honour or fame; it was simply his love for his community. He and his wife, Angela, had moved to Edmonton only a scant few months before his passing. As well as his wife of 66 years, Angela and their two children Lucinda and Brian and spouses, he is survived by three grandchildren and their spouses, and three great-grandchildren.

Steve was born close to Moose Hill, near Thorhild, Jan 2, 1931; the youngest of nine children. As a young farm boy, he obviously learned quickly what hard work was about. It was noted he was always there to help with the harvest, build a garage, shingle a roof, or almost anything else. He was indefatigable in all his endeavors.

After high school in Thorhild, Steve worked on a seismic crew for a time, and after he and Angela married, he became a teacher. The couple moved to Grassland to teach, which is where Lucinda and Brian were born.

Lucinda, who is editor-in-chief of the Montreal Gazette (something Steve proudly shared with this writer several years ago) shared some thoughts for us about her dad on behalf of her and her brother Brian, a personal income tax consultant, who lives at Sherwood Park.

She notes that since their dad died in November, “Our family has been touched by the number of people who have come forward to share memories of dad.”

Steve was always ready to jump into a community initiative – anyone who worked with him at the Westlock and District Historical Society can attest to how proud he was of the Pioneer Museum and the lengths to which he and Angela would go to raise funds or spread the word about the museum’s unique collections, she recalled.

“But he would have been particularly happy, I think, to see how many of those memories involved former students grateful for the help and encouragement he offered them as a teacher,” said said.

“After all, a teaching job was what brought him to Westlock in 1962, and he became part of a remarkable cohort of educators who affected the lives of thousands of pupils in the area.

“Steve and Angela moved from Grassland so Steve could take up a job at the junior high school, where he taught math and science, where he was also vice principal. He joined a group of dedicated teachers that included Evelyn Arndt, Dorothy Baker, Fern Gagnon, Pauline Hahn, Chuck Keller, Bell Lowe, Grace Nelson, Elsie Wishloff, Mary Wynnychuk and of course principal Carl Poloway. (Please forgive any omissions or time-frame errors — it was a long time ago.) I remember them all as being thoughtful and talented, and our dad was certainly that. Not to mention caring.”

Chuck Keller, one of those teachers who worked alongside Steve and fondly recalled his friend and collegue.

“Outside of class, Steve was an avid participant in many teacher-student challenges, especially the annual softball game matchup. “

Lucinda said one of the persons commented on her dad’s online obituary, “He had a generous spirit and a love of teaching that made it easy for us to learn.” Another wrote, “Steve took time on Saturdays to help me bring up my mark in math. I was always so thankful to him. Not many teachers would do that.”

Karen Letts, a former student of Steve and one who worked alongside him at the Westlock and District Historical Society in Westlock posted his obituary on the museum’s page, and received many thoughts from others.

“I had Mr. Chodan as a junior high teacher, but got to know him as Steve when we were on the historical society board together. Steve was a man of vision, dedication and who believed in the importance of service to community,”

Some of the comments on her Facebook posting included, “I remember Mr. Chodan fondly. He will always be one of my favorite teachers.” Another wrote, “Sending love and light ... so many memories ... a Community Builder.” Still another said, “Steve was such a good ol boy with the best interests of his community always first.”

And there were many more comments referring to their admiration of him as a teacher and a community builder. As one wrote, “Teaching is such a marvelous vocation ... a teacher lives on through the students and their children. Thank you, Mr. Chodan.”

Lucinda concluded her thoughts, “Dad was proud to live in Westlock, and he was a great example of giving back, from his work as a minor hockey coach and a town councilor to his time at the Pioneer

Museum. But it’s nice to know that so many remember him as a generous and caring teacher so many decades after he retired.”

As Lucinda mentioned, there was much more to Steve than teaching, and coaching minor hockey at that time. After “retirement” he served five terms on Westlock Town Council, from 1989 to 2004.

Shirley Morie served as mayor for three terms during that time, from 1995 to 2004, when Steve was already a well-seasoned councillor.

“He was a good man. A good thinker. I really relied on him to bring out the very mature side of whatever we were discussing. He was a team player, and he had really good ideas,” she said. “I don’t think he ever made an enemy on the council.

“If it was a good idea, he would definitely support you. It didn’t have to be his way. If it was good, he was all for it. If it wasn’t a good idea, he always had very good reasons for not doing it. “He had the ability to look at the question from all sides.”

She said it was because of him that the library was relocated from the basement of the town office to become a true library in the old Westlock Elementary School. That was before her time as mayor, but she recalled he worked very hard to get it where it is.

But there was still lots Steve accomplished after he left council. He played a key role in restoring the Holy Cross Ukrainian Catholic Church (known as the Sandhills Church) near Thorhild, and both he and Angela became heavily involved with the Westlock and District Historical Society, where he later served as president from early 2005 to early 2014.

Art Avery who is the current president of the Historical Society, attended Thorhild High School shortly ahead of Steve, noting, “We had many of the same friends.”

The pair also worked together as volunteers with the society for several years.

“Steve had many loves. First, was his wife Angie and children Lucinda and Brian. He was very proud of his family. Secondly was his love for the church. If it were not for his organizing and yes, prodding, the Holy Cross (Sandhills) Church would not have been painted, upgraded and the yard spruced up.”

While he may have been a family man, an educator, councillor and community volunteer, Art noted, “Steve was also a farm boy at heart. He loved to reminisce about the farm.

“Working with Steve at the museum, I found him to be determined, meticulous, project driven and one who really thrived on being part of the ‘team.’ I consider it a privilege to have known Steve and call him friend.”