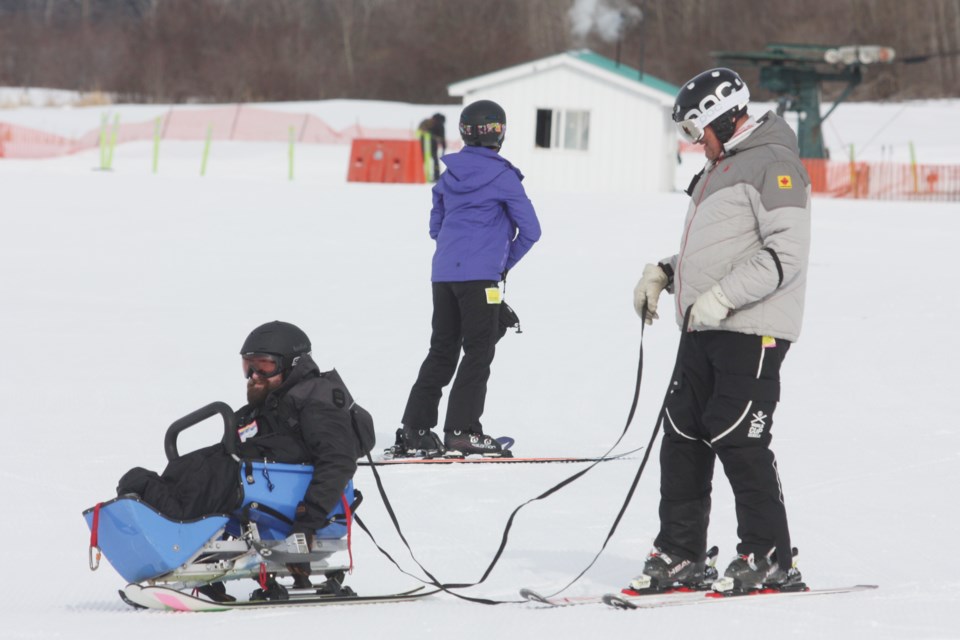 Canadian Adaptive Snowsports held its Slide n' Ride event at the Tawatinaw Valley Ski Hill this winter giving some otherwise disabled skiers a chance to hit the slopes. It was just one of the many events and activities that drew groups and individuals from near and far.

Athabasca County councillors can’t say enough good things about the Tawatinaw Valley Ski Hill, but any financial support for the facility located just over the county line in Westlock County, is still a long way off.

County council heard from Tawatinaw Valley Ski Club president Wendy Batog and secretary Toni Siegle at the May 12 council meeting, who provided an update on the hill’s second winter season under the management of the ski club.

In short, the facility saw more visitors and more usage from around the region than it did in its first year, despite being forced to close early due to the coronavirus pandemic and missing out on several big late-season events.

“We were able to continue to build on the success of the first year. This past season, our ability to make snow was really critical to us being able to open before Christmas and then the natural snow that came afterwards really built on our manmade snow and really allowed us to have great conditions until the end of the season,” she said.

The addition of several new features at the hill, including the Pembina Path Snowshoe Trail, financed by Pembina Pipelines; a rope tow tractor upgrade from Albert Miller; and a community enhancement grant from Alpac for snowmaking, all made the facility that much more appealing to locals and visitors from out of the area. A new skating rink near the chalet was also a big hit, as was the free tubing on Sunday.

Visitors from Sturgeon County and Edmonton each contributed 14 per cent of overall visitors with Thorhild, St. Albert, Slave Lake and others making up for the rest.

“Our marketing goal is to expand our reach for people to get familiar with the drive out to Tawatinaw Valley,” said Batog. “Increasing our numbers from other areas will help provide fiscal sustainability.”

She went on to say the facility broke even in its first year and she is expecting similar numbers for the previous season, but those numbers won’t be available until the end of June. She also notes much of the budget comes as a result of municipal grants, with Westlock County now entering the third and final year of its agreement to help the ski club become sustainable. That contribution is expected to decrease significantly.

“Everyone wants to see it work, it’s a great gem of a place,” said Batog.

“It is a fabulous place, that’s my personal opinion,” said reeve Larry Armfelt, who even offered to volunteer.

Coun. Dennis Willcott told council he has fielded several calls from ratepayers in the last year who expressed their support for the ski hill.

“It’s excellent and amazing with the programs and initiatives they’ve taken on in the last couple years … they’re just doing a great job there,” said Coun. Christi Bilsky.

“It is an excellent place, there’s no doubt about it,” said Armfelt, who also noted there is another nearby ski hill in Thorhild County too, the Long Lake Ski Hill.

“Financially, probably not. Spiritually, if we can help them with grants and so on, absolutely,” said Armfelt.