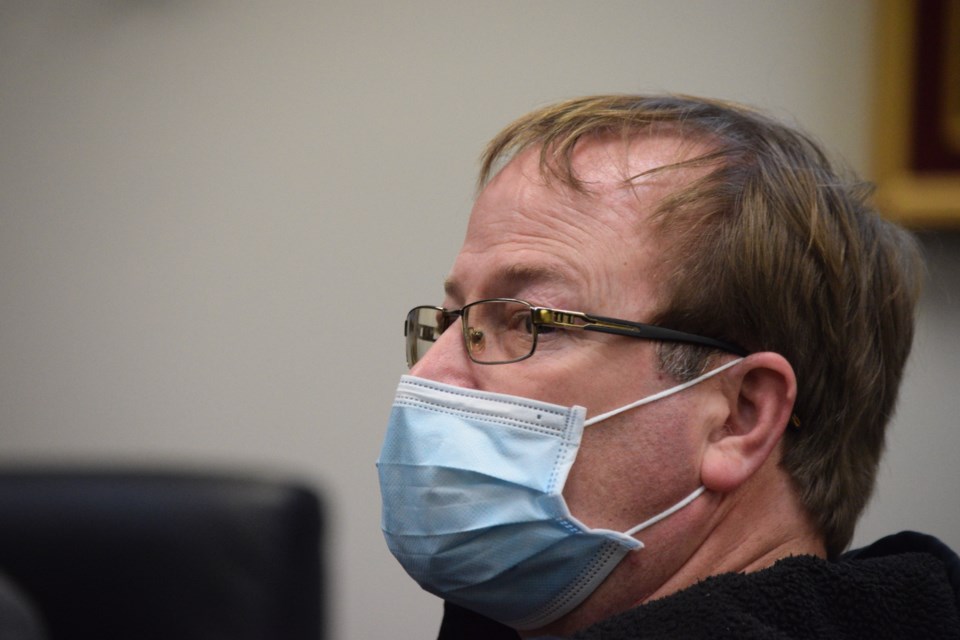 Paddle River Golf and Country Club president Steve Kamminga told Town of Barrhead councillors the details of their irrigation project improvements. The project was needed after a culvert that supplied their well shifted by more than two feet. Barry Kerton/BL

BARRHEAD-It looks like the Paddle River Golf and Country Club will receive financial help in repairing its irrigation system after all.

On Feb. 23, Town of Barrhead councillors granted the not-for-profit organization's request for financial aid to help them repair the golf club's irrigation system approving a donation of up to $7,500.

The decision reverses council’s previous stance during their Feb. 9 meeting, when councillors suggested the club needed to explore its fundraising efforts more fully, including by canvassing its membership for donations.

The golf club asked council via a letter to consider contributing financially or through in-kind service to help the golf club upgrade their well and water intake systems. The club also asked for the town's assistance in supplying and hauling in black soil and gravel for their flower beds and cart paths which council approved. The estimated value of the in-kind work is $1,000.

"Over the years, the culvert has shifted up over two feet," Saumers said, explaining that the culvert had been supplying their irrigation well with water from the adjacent Paddle River.

As a result, the club ran out of water for irrigation, forcing them to bring in water by tanker.

Besides lowering the culvert down at least two to three feet, the almost 40 years worth of debris must be removed and hauled away.
The pipe also needs to be fitted with a beaver guard, Saumers said, adding the rodent is responsible for much of the debris build-up.
Mayor Dave McKenzie asked if they had received estimates for the work and how much it is estimated to cost.

Kamminga said they contacted two companies, only one of which gave them an estimate.

"We have nothing in writing," he said, adding the verbal estimate was $14,000.
Kamminga added he has also talked to the province about what environmental requirements they have to meet.
Chief administrative officer Edward LeBlanc interjected that public works received a quote, on behalf of the club, for $12,500.

"We are fortunate because we have a maintenance clause on the well, we are allowed to fix it, at our cost," he said.
One of the reasons why the club approached the municipality, Kamminga said, is because they have a limited window to complete the work.

"To make sure no water is flowing into the culvert while they are digging, we have to get it done before everything thaws," he said.
Coun. Rod Klumph asked what fundraising activities the club had undertaken. At the Feb. 9, meeting Klumph expressed that the club needed to exhaust all other fundraising opportunities, including canvassing its members.

Kamminga said they have sent letters to the Barrhead Elks and Rotary Club and have a meeting scheduled with Neerlandia Co-op.
It should be noted that the club has set aside $5,000 for the project.

"I've also approached a couple of private members, but they said they are just scrambling to get their membership fee in," he said. "By now, we normally have 150 to 200 members signed up ... we have 55, the majority of which are seniors."

Klumph suggested that it would be worthwhile to canvas all the members that signed up, saying he was confident many would be willing to contribute.

Unfortunately, Kamminga said they are in the process of drafting a letter, but due to the time crunch, they are not sure they will receive an answer in time.

He noted that the majority of the letters would have to be sent by conventional mail.

Coun. Don Smith said while he supported contributing financially to the project, he suggested that it could be in the form of a loan that would be repaid depending on the club's success on its other fundraising efforts.

"My fear is that without some sort of conditions, organizations will come to council chambers asking to be bailed out. I have no problem helping organizations like the golf course out, but we have to be careful," he said.

"I don't want council to be a scapegoat. I want them to do everything they can to come up with those funds, if they can't do it, then we are there for them.”