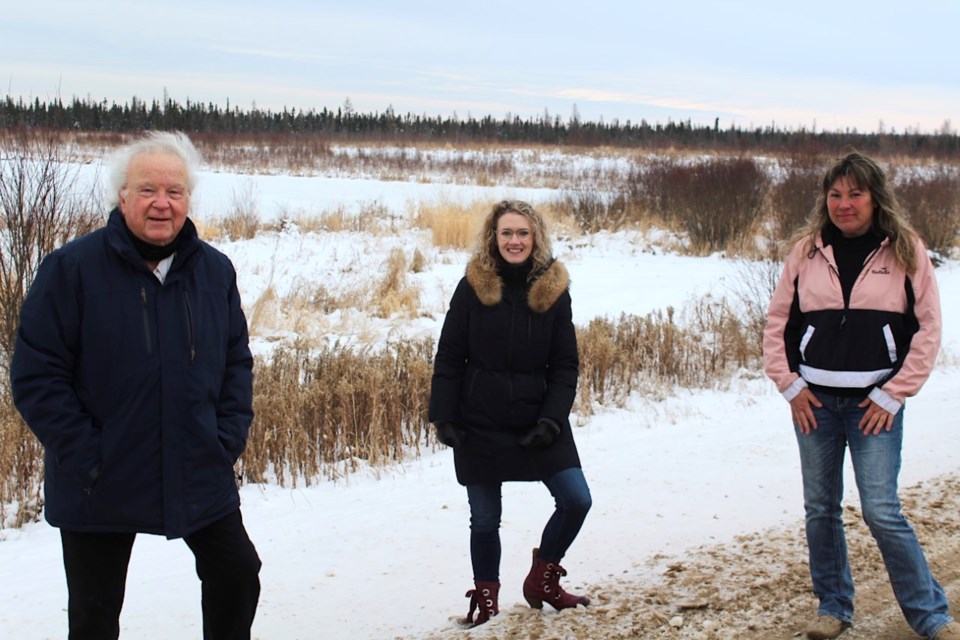 Athabasca County councillors held their noses and voted to accept a $1.11 million tender for work on three road construction projects this summer — $574,000 more than the municipality received in stimulus funding for the shovel-ready projects. Pictured, Fort McMurray-Lac La Biche MLA Laila Goodridge met Athabasca County reeve Larry Armfelt and Div. 6 Coun. Penny Stewart on the Plamondon Connector Road Nov. 22 to announce $285,000 through the Municipal Stimulus Program that would be used to stabilize the base of the road in the spring.

At their March 25 regular meeting, councillors heard from director of infrastructure services Norm De Wet, who came bearing some bad news. It seems the shovel-ready projects that were supposed to be completed with the help of stimulus funding from the Government of Alberta, were put out to tender, and came back at almost twice the amount the municipality was granted.

De Wet reminded council the county received $622,500 in stimulus funding as part of the provincial government’s Municipal Stimulus Program. Three fully-funded projects included $285,000 to stabilize the base on the road that runs just over eight kilometres from Highway 63 to Range Road 170 – commonly known as the Plamondon Connector Road – 68 kilometres northeast of Athabasca; a road rebuild from Township Road 655.5 to Range Road 185 for $112,500; and a road rebuild from Range Road 204 to Highway 63 at a cost of $225,000.

Three sealed tenders were received for the work on all three projects. The lowest bidder came in at 45 per cent above the Alberta Transportation average at $1,111,981, leaving Athabasca County on the hook for $574,000 (from reserves), if the projects are to be completed before the end of 2021, when the stimulus funding expires.

In addition, said De Wet, $85,000 for the purchase of Gravelock to be used for base stabilization on the Plamondon Connector Road, also needed to be approved by council.

“I don’t know what else to say about the pricing, besides the fact that there’s $500 million out there (in stimulus funding), it’s got to be spent for the end of this year, and every contractor is going to take advantage of that,” said De Wet.

Councillors recognized they were backed into a corner, and were not impressed to say the least.

“That’s not the same thing we were thinking, we thought we had enough money to do all that but anytime the government gives money, the contractors know that, and they’ll double it.

Boy, I don’t like this at all. I know we need these jobs done, but I mean, that’s a hell of a price to pay,” said Coun. Dennis Willcott to start of the conversation.

“This really burns me up, that these construction companies are doing this,” said Coun. Dwayne Rawson. “I almost ant to say to hell with it, and they can sit on their ass for the next year, but I do understand we need to get work done.”

Coun. Travais Johnson reminded council the work will have to get done one way or another.

“We’re kind of between a rock and a hard place,” he said. “If we lose this stimulus money and then this road still isn’t done. And then when we do have to do this road, it’s going to cost us $1.5 million to do it ourselves.”

“I think this totally stinks, it sucks, and I would say a bunch of other nasty words about it, but I can’t. You know, they want to help, it’s a stimulus, it’s supposed to be so wonderful, but yet it’s going to cost us a half a million dollars?” said Coun. Christi Bilski. “I’d like to do something, but with MSI being cut, us paying for policing, and now they want us to throw half a million dollars for their stimulus? I’m sorry I can’t support it.”

“It stinks. The whole thing stinks,” he said, but called the inflated tender a “sign of the times,” and agreed with Johnson that it was going to have to be done eventually, and the stimulus money they did receive is only available for a limited time.

“I don’t like it either,” said Coun. Penny Stewart. “I think we move forward with it. It scares me that this might actually even get worse and it might not just be tied to the stimulus.”

“I don’t like it either,” said Coun. Warren Griffin. “But I don’t think you can throw away government money because if you send it back to them. You’re not going to get it next time. We know that’s how the government works. We’ve got to work with our partner as much as we sometimes have to hold our nose with it.”

CAO Ryan Maier tried to put everything back in perspective as the conversation continued, saying he didn’t advise rejecting the bid outright or cancelling the projects. Instead, he advised going back to the provincial government and explaining the situation that has come about.

“I think the one option would be that we go back and speak to the province about the potential of changing things up a little bit in how we use this grant,” he said.

After a little more discussion, council came to the conclusion they would hold their noses and accept the $1.11 million bid from E Construction Ltd., and to purchase the Gravelock stabilizer from Forus Ltd. For $85,000, with the balance of the funds to be taken from reserves.