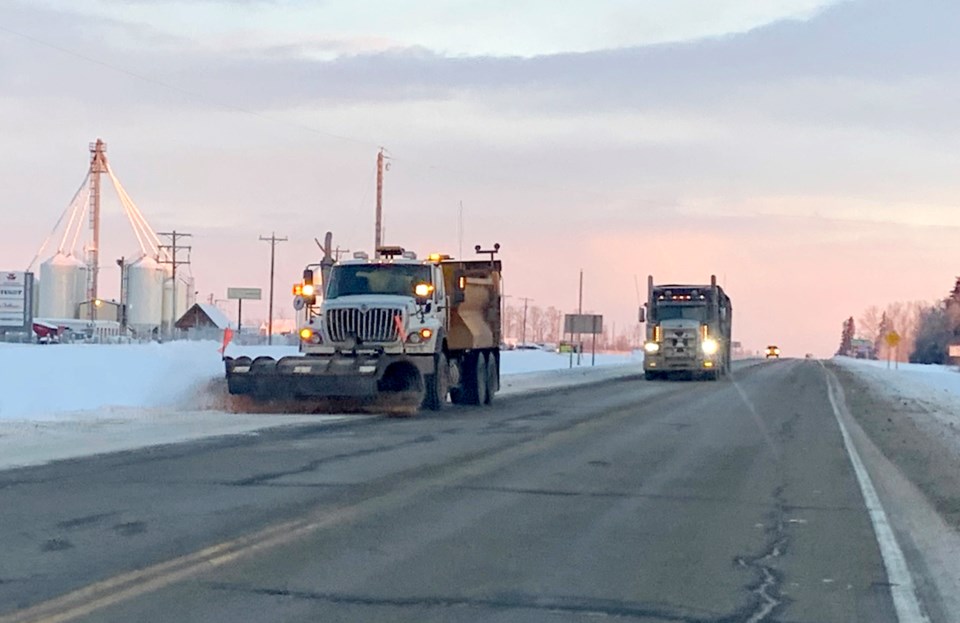 Snowplows, like this one pictured on Highway 44 just south of the Town of Westlock Nov. 20, will be a common sight until spring.
WESTLOCK - While locals continue to dig out from winter’s first major snowfall Nov. 18, RCMP are reminding motorists to exercise patience behind the wheel, especially on area highways.

The Westlock area received around 10 centimetres of snow Wednesday, slowing traffic to a crawl in and around town, while plows took to area highways and streets — Environment Canada had issued a snowfall alert that day for the Edmonton region.

In addition to ensuring you have winter tires on your vehicle, as well as a good emergency kit that includes things like a blanket and flares, Westlock RCMP Staff Sgt. Al Baird said drivers need to take extra time during their travels to ensure they get there safely.

And although the Traffic Safety Act states drivers need to slow to 60 km/h while passing those vehicles, Baird recommends easing off the gas pedal even further.

“You’re supposed to slow to 60 on good roads. You’d think that when it’s slippery and icy that you’d slow down even more just due to the road conditions so you can make an emergency maneuver, or stop on time,” Baird noted.

“Tow truck drivers, ambulance, fire, police … people are trying to do their job on the side of the road and don’t need to be dodging traffic if people are going too fast.”

And while drivers are allowed to pass working snowplows, Baird doesn’t recommend it for a host of reasons and said people could even face a charge of passing while unsafe, depending on the conditions.

“Obviously you have to be very careful. The snowplows, especially if they’re going slow, will eventually pull over to the side and let people go by. You just have to patient, no need risking life and limb to try and get around it,” he said.

“If the snowplow is out, the roads aren’t good and people have to slow down and respect that.”

Clean your car of ice and snow

Unremoved ice and snow build up on vehicles is also something RCMP face throughout the winter months.

“I’ve seen people driving using what are basically little peep-holes in their front windows, or the snow isn’t cleared off their vehicle … they do a little brush on the windshield, but yet as soon as they get on the road, snow is flying everywhere causing a hazard for the people behind them,” he said.

In addition to ensuring your front and rear windows are defrosted, the outside of the vehicle should also be cleared of ice and snow so headlights, tail lights and the licence plate are visible.

“If you can’t see out of your vehicle, how can you avoid pedestrians crossing the road or vehicles coming from the side?”

If there’s an accident?

If you’re involved in a  “fender bender” it only needs to be reported to police if the combined damage is above $2,000.

“And that adds up pretty fast. A bumper can cost a couple of grand easy,” said Baird. “With those things, especially if there’s no injuries, or no suspicion of drinking and driving, just call in either to the complaint line or if it’s more serious call 911 and then we’ll determine how bad it is and go from there. And due to COVID, we can do things through e-mail without them actually having to come into the detachment.”

New rules in place for Town of Westlock facilities
Nov 26, 2020 2:20 PM
Comments
We welcome your feedback and encourage you to share your thoughts. We ask that you be respectful of others and their points of view, refrain from personal attacks and stay on topic. To learn about our commenting policies and how we moderate, please read our Community Guidelines.