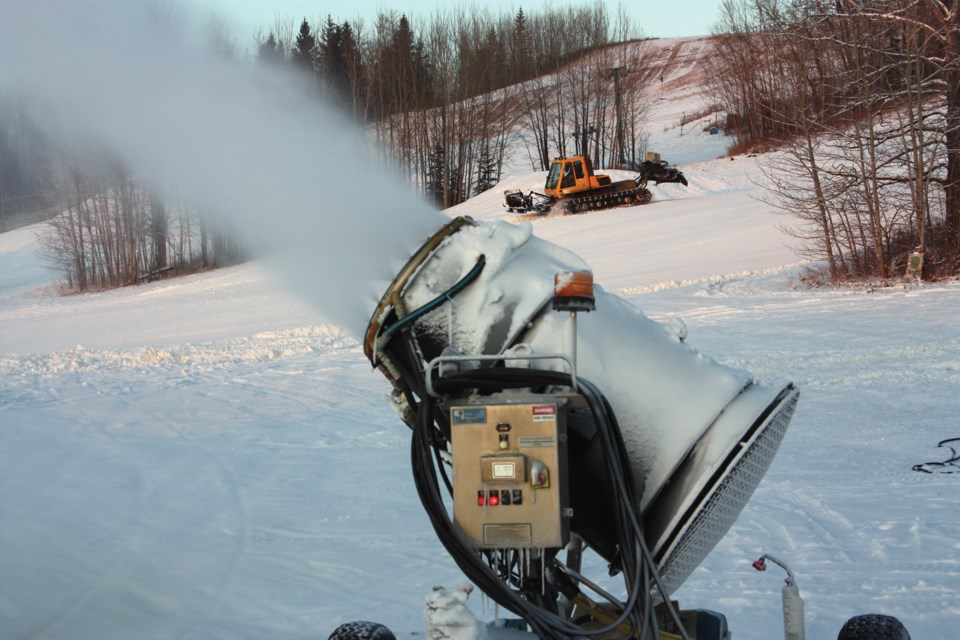 Preparations for the 2019-20 ski season are well underway at the Tawatinaw Valley Ski Hill. The facility held its first fundraiser of the year Nov. 30. The snow machines and snow cat were busy that day grooming the runs and putting down a fresh foundation of snow as opening day, Dec. 14, approaches. Chris Zwick/WN

TAWATINAW - It seems like it has been a long time since July 24, 2018 — that was the day Westlock County council voted to close the ski facility at Tawatinaw permanently.

A lot has happened since then, but needless to say, after its first successful year under the operation of the Tawatinaw Valley Ski Club, supporters around the region are hoping to see a similar success for the 2019-20 ski season.

Opening last year on Dec. 15 and closing March 30, the facility hosted more than 9,000 patrons as avid skiers and nature lovers came to see what Tawatinaw was all about.

With opening day once again scheduled for the middle of December, staff are busy grooming the trails while the snow machines create snow outside. They are also preparing the inside of the chalet to serve all who may enter its doors this winter, whether as skiers or just visitors to the many events that are planned throughout the season.

On Nov. 30, the facility ran its first fundraiser of the season with a roast beef dinner, tubing for the kids, prizes and a snow-making demonstration. About 40 had bought tickets, but more were expected at the door.

“It’s definitely starting to look a lot more wintery,” said Kelly Craig, with Tawatinaw Valley Ski Hill guest services. “There are a lot of people who have been interested in our snow-making, so I’m really excited because it’s so neat.”

About 1.5 million gallons are pumped over the hill to make the powder so often sought after by skiers, so the machines are running almost non-stop at the beginning of the season to make sure a base-layer accumulates before the large snowfalls of December and January bring the real thing.

There are already three Christmas parties booked for the chalet as well, said Craig. Santa will also drop by Dec. 21 and the facility will host its annual Old Fashioned Christmas Party Dec. 28.

“This is our second year for that and people really enjoyed it, so we’re doing it again,” said Craig.

Sunday, Jan. 19 marks International Snow Day, which the hill will be celebrating along with other ski facilities around the world. While still in the planning stages, Craig said there will be events for visitors to take part in and she hopes to see a lot of people out to the hill that day.

Weeks after voting to sell the property, county council reconsidered after impassioned pleas from the public, and entered into a three-year agreement with what is now Tawatinaw Valley Ski Club.

The county agreed to contribute $200,000 per year to the facility for operating expenses and another $50,000 per year for capital costs, which must be matched by the operators.

County council also agreed to continue to pay down the $1.5 million debenture that was used to build the chalet.

Donations from many groups and organizations around the region have helped cover the club’s capital contributions for the length of the agreement as they try to market the facility as a viable four-season venue.

At the time the agreement was signed the club estimated $462,500 would be required for infrastructure improvements over the next five years.

Secrets of Athabasca: The enduring legacy of the Salé-Olson family
Feb 26, 2020 6:51 AM
Comments
We welcome your feedback and encourage you to share your thoughts on this story. We ask that you be respectful of others and their points of view, refrain from personal attacks and stay on topic. To learn about our commenting policies and how we moderate, please read our Community Guidelines.