In-town transportation is currently being subsidized by over $50K annually
Mar 4, 2021 11:05 AM By: Kevin Berger 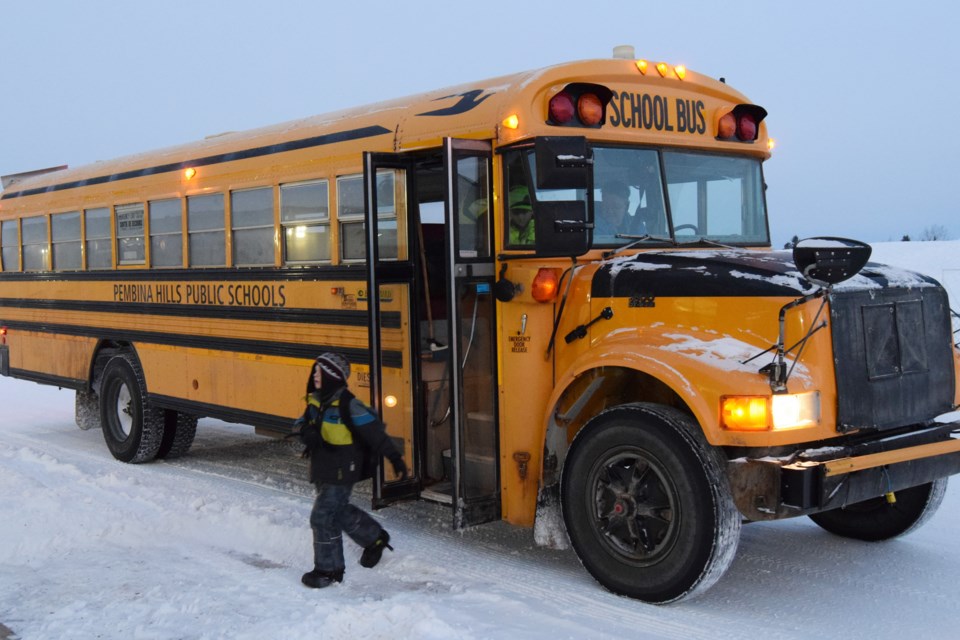 In the 2019-2020 school year, a total of 200 students in Barrhead, Westlock and Swan Hills utilized in-town transportation. (Ridership is down this year due to a drop in enrolment related to COVID-19.) Pembina Hills trustees are debating whether to potentially raise fees or combine/cancel routes in order to recover the full cost of in-town transportation.

Pembina Hills School Division trustees held a discussion about the future of in-town transportation during their Feb. 24 meeting after learning that the school division is subsidizing the service by more than $50,000 each year.

Trustees were presented with a cost analysis of the current in-town transportation fees that was completed to determine if the fees could be adjusted to cover the full cost of the service.

In-town transportation refers to busing provided within the communities of Barrhead, Westlock and Swan Hills. Alberta Education does not provide any funding to transport students who live within 2.4 kilometres of their designated school.

Based on data from the 2019-2020 school year, Pembina Hills is subsidizing the cost of in-town transportation to the tune of $53,187 per year.

Notably, this was to the surprise of several trustees who believed in-town transportation fees were sufficient to cover the costs of service.

“To see that we weren’t actually doing cost recovery is a concern and I think it does need to be addressed,” said board chair Jennifer Tuininga.

Supt. David Garbutt was asked to give administration’s perspective on this issue. He indicated their stance would be to charge a fee that would fully subsidize the cost of the service.

“(In-town transportation) is an important service for those folks that wish it, but it does come at a cost,” said Garbutt.

“The reality is right now you’re taking funds from our pool of money to run our division, and you’re subsidizing busing in town for parents and students out of that pocket of money and we receive none from the government.”

Garbutt added that if the trustees wanted to continue subsidizing this service, then they needed to come up with a rationale for doing so.

Trustee Judy Lefebvre asked director of transportation Shantelle Haitel if increasing the fees would potentially impact the number of riders, to which Haitel could not provide a definitive answer.

Trustee Jackie Carson was the most vocal in opposing any sudden increase in in-town transportation fees.

“To me it seems unreasonable to increase the fee substantially over one year to be in a cost recovery model,” she said. “To me, it seems like this is something that will need to be achieved over many years, rather than in just one school year.”

Carson also said the division had set a precedent of subsidizing a deficit over the years, though Tuininga and trustee Wendy Scinski pointed out they believed the fees were fully covering the cost of the service.

In any case, trustees reviewed several potential scenarios to fully or partially cover that $53,187 shortfall, the first being to simply cancel in-town transportation entirely.

The second option would be to combine the routes in Barrhead and Westlock by having one bus pick up students instead of two, as well as increasing in-town transportation fees from $360 per student to $470. (Kindergarten students would pay 50 per cent of that.) That would just about cover the cost of in-town transportation.

The third option was similar to the second, but with the fees increased to $450 per student. Kindergarten students would pay 100 per cent of the fee under this option, which would also just about cover cost of in-town transportation.

Option 4 would be to combine the two routes in Barrhead and Westlock, cancel the in-town route in Swan Hills entirely and increase fees to $400 per student (with Kindergarteners paying only half). It wasn’t stated if this option would fully or partially cover the cost of the service.

Option 5 was to combine the routes in Barrhead while keeping existing routes in Swan Hills and Westlock. By raising fees to $500 (with Kindergarteners paying half), that would leave a shortfall of only $6,865 per year.

Finally, Option 6 was to simply maintain the status quo and keep subsidizing the service to the tune of more than $53,000 per year.

Incidentally, combining routes in either Barrhead or Westlock would result in an increased ride time of approximately 20 minutes, both in the morning and afternoon.

Combining routes would also potentially create a waiting list of students, which would be twice as long in Westlock due to the high numbers of riders.

Trustee Kerry McElroy asked how in-town routes would compare to rural routes if they were extended by 20 minutes.

Haitel indicated that even with a pick-up time of 7:45 a.m., students utilizing in-town transportation would still get on the bus later than any students riding rural routes, some of whom are picked up as early as 6:50 a.m.

Ultimately, the board did not make a final decision regarding in-town transportation fees.

Instead, administration was asked to bring back some calculations as to what would happen if fee increases were spread over one or two years, and what the shortfall would be if the fees were increased to $400 per student, with Kindergarten students paying either 50 or 100 per cent of that fee.