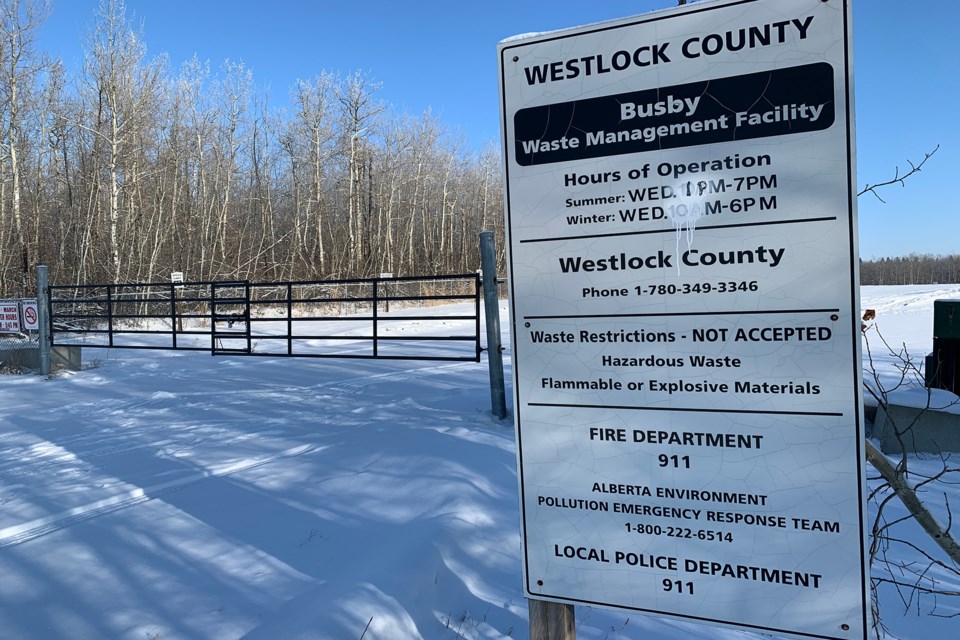 The Busby waste transfer station was on the list for closure this year, but Westlock County councillors are rethinking that decision.

WESTLOCK — Westlock County administrators say the cost of getting rid of the garbage that comes through the transfer stations has increased drastically in the last 10 years.

They presented new information to councillors Feb. 16 in a governance and priorities meeting as the county tries to figure out what to do with transfer stations and how to pay for them.

From 2010 to 2020, tippage fees paid to the Westlock Regional Waste Management Commission have gone up by 174 per cent. The increase includes the $35 resident fee that was introduced in 2019.

So did deputy reeve Brian Coleman, who called it “unnerving” and “a scary number.” Coleman currently sits on the waste commission board and added there are reasons for those cost increases.

"You have to remember though that regulation has changed drastically, the cost of building a cell is about $400,000 now. There was no money put aside for capital, so all of a sudden you have to start building capital. There’s a whole bunch of things that impact it. … Leachate was $100,000 in 2019. We never even had leachate costs.”

But Moore added the amount of garbage has also increased. In 2014, 2,400 tonnes of residential county waste crossed the landfill scales — this includes transfer site waste, hamlet collection, and residents using the landfill. By 2020, it went up to 3,340 tonnes, for which the county paid $220,000.

By contrast, the cost of operating the transfer sites have only increased by 22 per cent over the same time period, which Stitsen says is a testament to admin and the “good work they’ve been doing to keep these costs in line.”

With the comparison in cost increases, administrators say they wanted to point out that operating the transfer sites hasn’t been as expensive as getting rid of the garbage that comes through there.

“Increases over the past 10 years have not been adequately captured through increases in taxes, they have generally been captured through reduction in expenditures and ultimately services,” clarified interim CAO Rick McDonald via e-mail.

“There is a point where this model of financing transfer stations is not sustainable and where council must consider how to increase county revenues and reduce services. The county is in a challenging financial position and any change it considers will impact either taxes, fees or services.”

Admin says they also have information from other municipalities related to waste management, which they presented to councillors behind closed doors, citing it as “proprietary.”

“It is very difficult to compare operations,” wrote the county’s agriculture and environmental services Jacolyn Tigert in a briefing note, because some municipalities pay a subsidy based on landfill deficit but they don’t pay tippage, others don’t pay anything, and some don’t offer recycling.

Councillors halted the proposed closure of two transfer sites in the county earlier this year after public concern, most of it expressed directly to councillors or administrators.

“It still looks like everyone wants to leave them open. Our ratepayers, we were elected by them, we see the need that they want to keep them open,” said Stitsen Feb. 19 over the phone.

“This is my opinion: they will stay open. It’s not council’s opinion, but mine. The residents have expressed their concerns about it and rightfully so. Council will work to making sure that they stay open.”

That decision could lead to a 1.75 per cent increase in taxes, although McDonald has said a final decision doesn’t need to be made until assessment numbers are confirmed and the county can parse out what it can or can’t pay for.

Stitsen says adjustments will have to be made to the budget in order to keep transfer stations open, but there’s no certainty yet about how to incorporate them into the budget with or without a tax increase.

Any garbage that comes through the transfer stations ultimately ends up at the regional landfill managed by the waste commission. Residents don’t pay tippage to use the transfer sites — there are no scales at any of the four — but the garbage gets weighed once it reaches the landfill.

The county subsidizes 4,000 kg of waste at the landfill, which was cut in half last year from 8,000 kg. Moore clarified that the waste commission is not involved in managing the subsidies, and municipalities get the entire waste bill at the end of the year.

A $60 fee was introduced this year to cover some of the tippage subsidies, and applies to any resident who wants to use the transfer stations or the landfill, although for the latter there is the option to pay by weight directly to the waste commission. Commercial accounts have also been transferred from the county to the waste commission and are no longer part of the subsidized portion.