They held physically distant ceremony May 2 in from of the Westlock Baptist Church, with family and friends joining in a parade of cars
May 12, 2020 5:35 PM By: Les Dunford 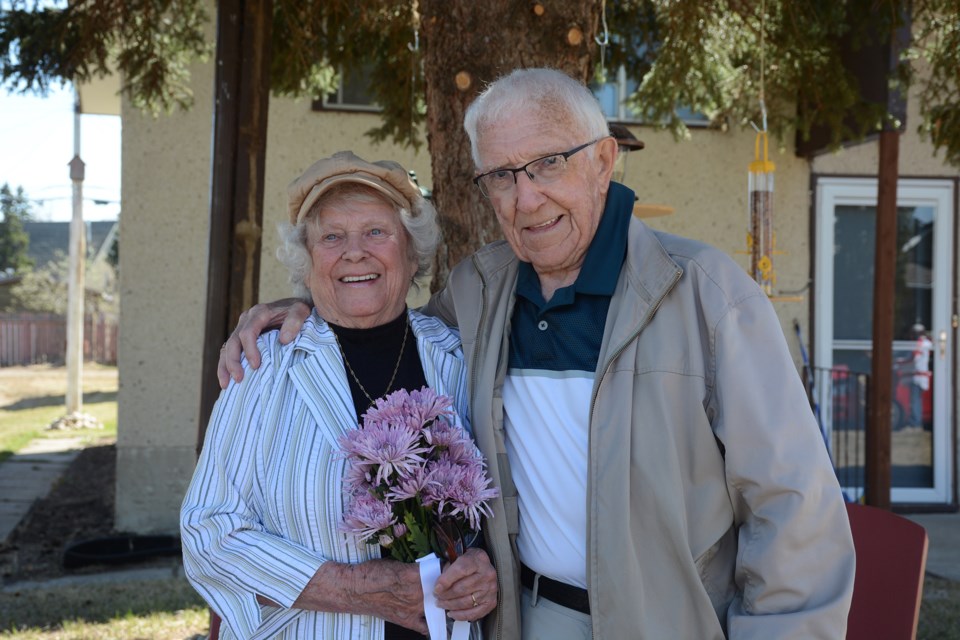 Winnie and John Anderson celebrated 70 years of marriage in a unique way May 2. Their wedding day was May 6, 1950. Les Dunford/Westlock News

WESTLOCK – Sometimes, ways can be found to make the best of a tough situation.

With their 70 year wedding anniversary coming May 6, 2020, the children of John and Winnie Anderson had hoped to have a big family gathering to celebrate the occasion.

But the COVID-19 pandemic came along and spoiled their plan. So between the family and friends, they decided to hold a surprise parade past their Westlock home Saturday afternoon, May 2.  Somewhere along the thought came of having the couple renew their vows. The Anderson’s pastor, Carson Cole thought it was a great idea, and John and Winnie were alerted to that part of the plan, to which they agreed.

Shortly after 2:00 p.m., the parade of cars with family and friends shouting greetings and carrying congratulatory signs drove past the Anderson home. The Town Peace Officer led the parade, with one of the Town fire trucks at the end; sirens blowing. The Andersons were overwhelmed by this surprise, which left Winnie with tears of joy.

The happy couple were prepared for this, and both read their pledge to continue to share and care for one another to the end of their days. Winnie went the extra mile, with even more thoughts of her own. With the use of a good speaker system, everyone was able to hear and share in this happy time, even from the safe social distance. Following the ceremony, most of their children gathered on the lawn for a wide angle view of the group with their parents. 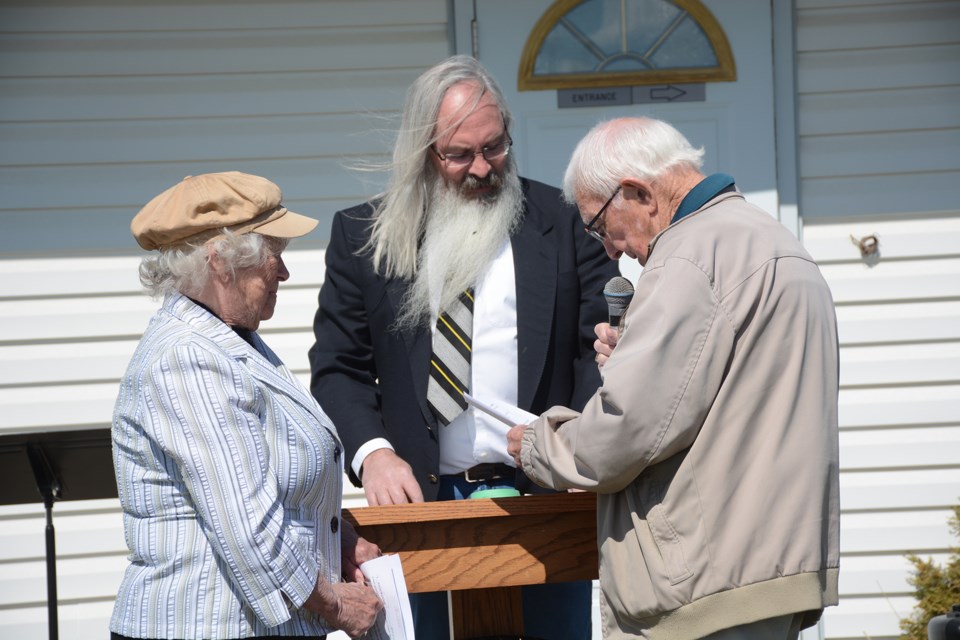 Baptist Pastor Carson Cole with John and Winnie Anderson in front of the Westlock Baptist church. Les Dunford/Westlock News
John Anderson and Winnie Fowler were both born and raised in London, Ontario. Both families had been in the area for several generations. They first met at the local swimming pool when they were 14 years old. Rumor has it Winnie was wearing a brand new two piece bathing suit, which caught John’s eye, and he did a fancy dive to impress her. They began going together when they were 16, and when they were 18, were married May 6, 1950.

Their marriage was blessed with 11 children; seven sons and four daughters. Unfortunately, the three eldest sons have since passed away.

“Things happen. I don’t think life would be life without ups and downs,” Winnie says.

In 1978, they moved to Fort McMurray in 1978, where John worked at Syncrude. They were there for 25 years. Then bought a home and moved to Athabasca where they spent the next nine years, then moved to Westlock seven years ago this coming June.

All of their children, except for the eldest daughter, who lives in Ontario, live in Calgary. There are 17 grandchildren and 10 great grandchildren. And most were in Westlock May 2 to join John and Winnie for this special occasion. Perhaps later, when things get back to a more ‘normal’ time, they can have a more formal celebration of their special anniversary.

And now, after 70 years, Winnie notes, “Who says young love doesn’t stay together?” The couple continue to enjoy good health and the company of one another in their senior years, and look forward to as many more as they are blessed with.

Reflecting back at the surprise parade and renewal of their vows, Winnie admits she shed more than a few tears and says, “It was a marvelous day. It’s something I’ll never forget.”