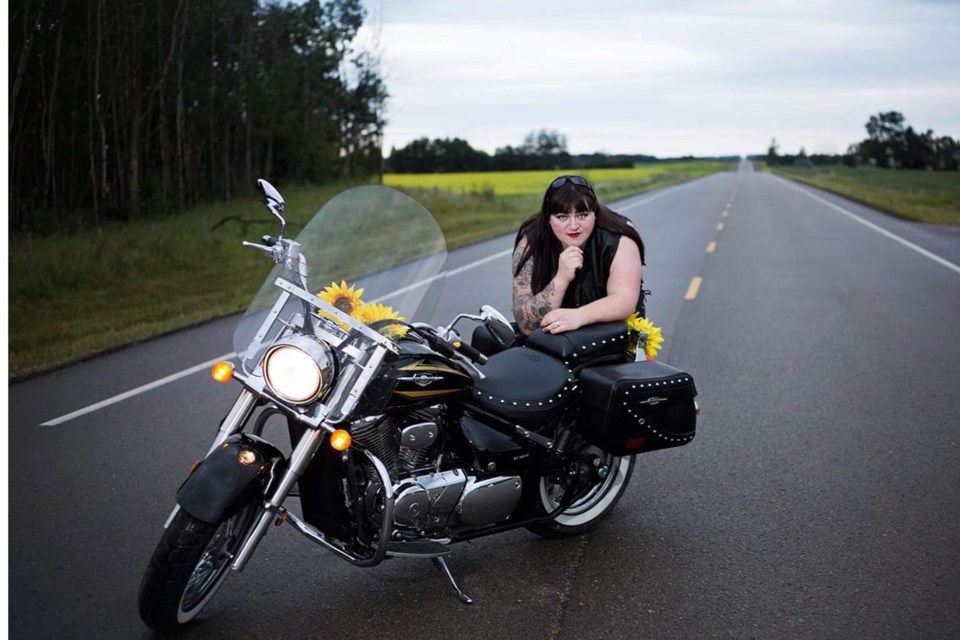 Camp Creek resident Amber Dean is trying to start a Barrhead chapter of Women in the Wind. Here Dean is pictured with her 2016 Suzuki Boulevard. Photo courtesy of Vanleeuwen Photography

BARRHEAD - Amber Dean loves to ride motorcycles and she hopes to help other women indulge in their passion for riding the two-wheel vehicles.

That is why the Camp Creek woman is hoping to form a local chapter of Women in the Wind.

Women in the Wind has more than 135 chapters and is in 11 countries, while in Canada, there are 17 chapters and eight in Alberta,

Dean is confident Barrhead can become the ninth.

“All we need is three members,” she said.

However, she is confident once the word gets out they will have far more than the numbers needed.

To become a member, in addition to the annual membership fee, women must own or operate a motorcycle of any type and have a valid class six licence.

Dean received hers about five years ago when she completed a motorcycle training course in Edmonton.

“I have ways been interested in motorcycles and riding. I’m not exactly sure why it is just something I have always wanted to do,” she said.

Before the course, she had never ridden a motorcycle.

That being said, Dean admits to being a little bit nervous and she did not start riding on her own until she got her bike about two years ago.

“I stopped into a motorcycle shop and fell in love with a 2016 Suzuki Boulevard,” she said.

Dean qualified for financing and brought home the bike that day.

Since then when weather permits, Dean can be found cruising around the region on her Boulevard.

Last summer Dean decided to go further afield and along with her husband Jon, who also a motorcycle enthusiast, decided to go on an extended motorcycle tour to Tofino on the west side of Vancouver Island.

“It was just an amazing experience,” she said, noting her favourite part of the trip is when they drove beside a large body of water.

“Even when you can’t see it, you can smell and taste it.”

And although the new Barrhead chapter of Women in the Wind might not, at least at first, go as far afield as Tofino, it is these types of experiences Dean hopes to bring to members.

Dean said she first learned about the club by accident when she attended the Edmonton Motor Cycle show during the Jan. 17-19 weekend. Women in the Wind had a booth at the show.

However, regardless of whether or not she ever learned about the group Dean said she would have likely decided to form a group regardless.

“When I’m travelling and I see a group of motorcycle riders in formation, it is something to see and I want to be and I want other women to be a part of that,” she said.

The hopeful future Barrhead Chapter of Women In the Wind will hold two information sessions at Laura’s Steak and Pizza (5209-49 Street) in Barrhead on Jan. 31 and Feb. 1.

The Jan. 31 will start at 7 p.m. and Gail Lane, Women in the Wind Canadian administrator, will be in attendance. The Feb. 1 session will start at 2 p.m.

If Dean can sign up enough members the Barrhead chapter of Women in the Wind will go through a three-month probation period. She hopes they will be full-fledged members by May 2, also known as International Women’s Motorcycle Day.

“It would be great to be able to put on our or ride or join another event as an official chapter of Women in the Wind,” she said.