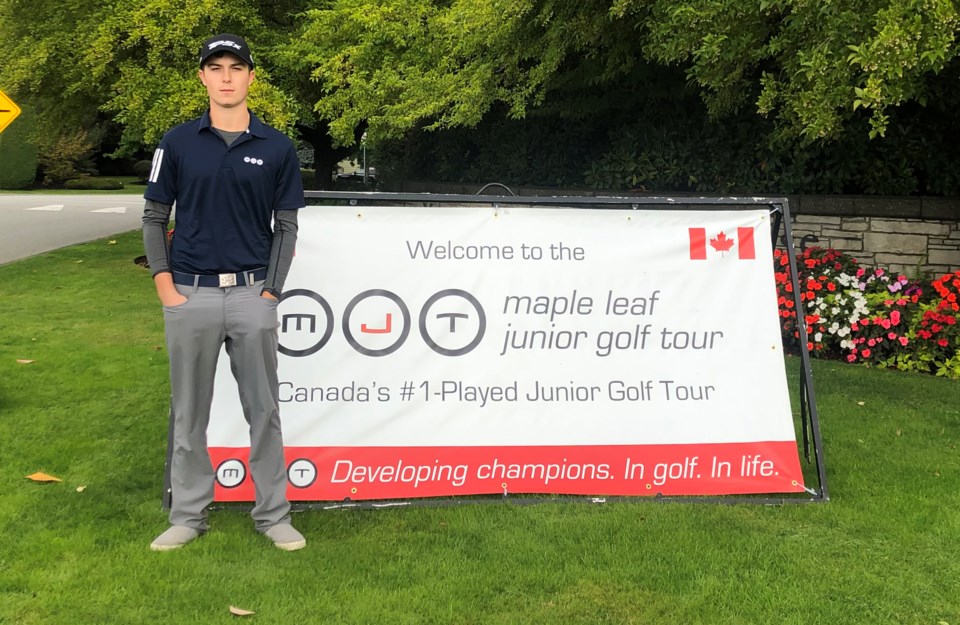 Westlock’s Reid Casavant has been making a name for himself in the golfing world, finishing 17th at the 2020 Maple Leaf Junior Golf Tour National Championship held over the Thanksgiving weekend at the Morgan Creek Golf Club in Surrey, B.C

WESTLOCK - It’s been a great season on the links for 16-year-old Reid Casavant, who has his sights set squarely on the future.

Although he wasn’t overly happy with his 17th place finish and three-round score of 242 (80, 82, 80) in the junior category at the 2020 Maple Leaf Junior Golf Tour National Championship held over the Thanksgiving weekend at the 6,955-yard Morgan Creek Golf Club in Surrey, B.C., the Grade 11 St. Mary School student is committed to working on his game.

“I was hoping to shoot under par … it wasn’t the result I was looking for,” said Reid. “I didn’t like my putting, or my driving. My wedge play was pretty good. But unfortunately at that course, it’s a long course, I didn’t have too many wedge shots.”

“And it rained lots too, so the course played really long,” added his father Dwayne, who watched Reid compete at the Oct. 19-12 event. “It’s a tough, tight course that punishes you for missing fairways and greens. Most of these kids are going under par to win, but the scoring across the board at the championships was pretty much over par.”

The MJT championship featured 108 elite young golfers from across the country and bills itself as the “No. 1-played Junior Golf Tour” and the only national junior tour run by PGA of Canada Professionals and the ‘Road to College Golf’ in Canada — in 2020 it hosted close to 80 events.

MJT alumni include many Professional Tour players and PGA of Canada Professionals, as well as Canadian amateur, national and provincial junior champions. The MJT aims to develop champions, in golf and in life, promoting the game from grassroots through to provincial, national, university and professional level.

Reid’s ultimate goal is to parlay his skills into a golf scholarship at a U.S. college and plans on spending the offseason working on his game as the process to get a scholarship is pretty intense. For the past two years he’s also worked with a coach based in St. Albert who’s played on the PGA of Canada and PGA of Australia tours.

“This winter I’m going to work at least 10 times harder. I need to bulk up a bit and add 20 to 30 yards off the tee. I also have to improve my shot shaping and go back to a draw,” said Reid, noting he’s learned a ton from his coach on all facets of the game. “And the mental game, too. I just need to take more of an attitude of saying to myself that I’m looking to win and not just being happy qualifying for events.”

To qualify for the championship, Casavant played in a half-dozen MJT events around Alberta over the summer and wound up sixth in the juvenile boys Order of Merit with 1,375 points and a Best 3 Order of Merit score of 850.

He also played on the McLennan Ross Alberta Junior Tour, which featured 24 one-day tournaments around Alberta — he finished third in the Alberta Boys Born in 2004 & 2005 category and amassed 320 points in the Titleist Order of Merit.

“My wedge, the knock-down shot, has really improved this year over last year. My driver was improving too, although at the championship it wasn’t great,” said Reid.

Reid also competed in the Alberta U19 Championship at the Links in Spruce Grove July 7-9 where he ended up in tie for 22nd with a three-round score of 223 (81, 67 and 75). He also accepted an invite to play in the prestigious Junior Masters Sept. 2-3 at the Wolf Creek Golf Resort where he shot 157 over two rounds and finished in a six-way tie for 18th.

“The U19 championship was a really good showing for him,” said Dwayne, noting Reid’s tournament scoring average for the year is sitting at around 76.