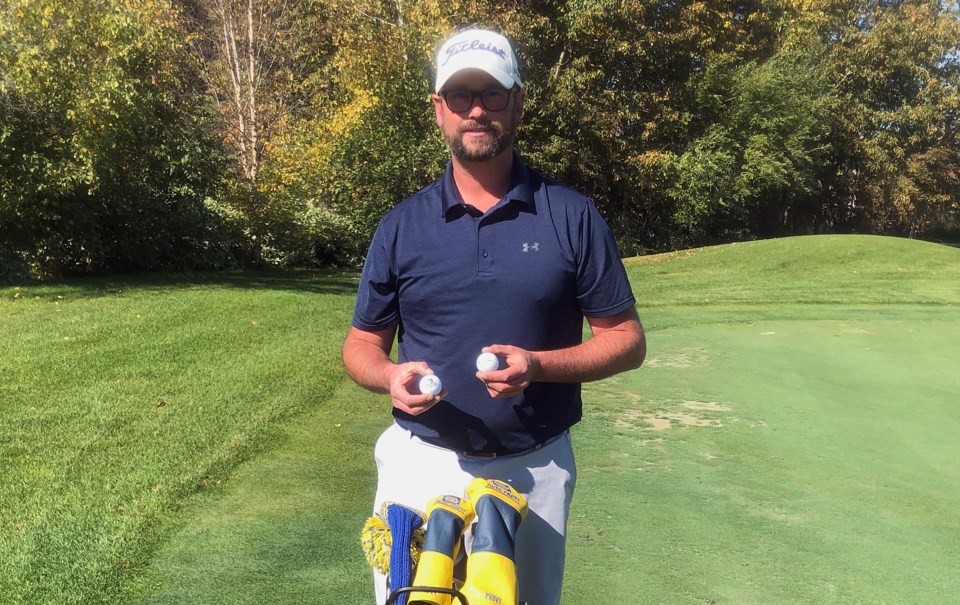 Westlock’s Ryan Provencal is now an apprentice professional of the PGA of Canada after shooting a 78 at the PGA of Canada Play Ability Test held at the Lacombe Golf and Country Club Aug. 26 — in his hands are the two balls he used during the round.
WESTLOCK - Most people around Westlock know Ryan Provencal as the owner of the NAPA Auto Parts store.

But now the 38-year-old married father of two has a new title — apprentice professional of the PGA of Canada.

Provencal, who’s a one handicap at his home Westlock course, earned that moniker Aug. 26 after shooting a 78 at the PGA of Canada Play Ability Test held at the Lacombe Golf and Country Club. Provencal was one six men to pass the test — to qualify golfers under the age of 49 had to shoot 79 and under. One woman also passed, posting the second-best round of the day with a 73.

It was tale of two nines for the 6’2” left hander, who staggered through the opening half of the round with a six-over-par 42. On the final nine, Provencal bogeyed only one hole to shoot a one-over-par 36.

His play with the flat stick nearly sunk him at the qualifier as Provencal figured he made 40 putts, which is about 15 more than he needs during a normal round.

“If I had made every five- to seven-foot putt I had that day I would have shot a 65 ... that’s how well I hit the ball. I’m not sure if it’s because they sped up the greens six-feet faster than the day before I played it, or if that was the only part of my game that was affected by nerves,” said Provencal, who up until that day had never played in a competitive golf tournament.

His journey to becoming a pro is unique to say the least. As a kid he dabbled in the game, but summers back then were for competitive baseball. In his early twenties he started taking the game more seriously and eventually decided that one day he’d like to become a pro.

“Becoming a pro was always a dream for me. I looked up to guys like Kevin (Lynes) and Taylor (Scinski) who are pros and good friends of mine,” said Provencal. “I always thought it was something I was going to do later in life.”

Later in life became the summer of 2020 due to a series of nagging injuries. With a bad back and a bum right shoulder that’s been operated on twice, Provencal wasn’t sure if he’d even be able to play this year.

“I couldn’t even shampoo my hair this winter so I didn’t even buy a membership at the golf course because I figured I wasn’t even going to be able to golf … that’s how bad it was,” he continued.

“Honestly, Trevor (Woods) at Talon (Sports Massage) beat the living crap out of me for months to give me any movement. Without him and physio, I wasn’t golfing. So my fear was that if I didn’t do it now, what happens if I can’t swing a golf club?”

By June he was finally able to swing relatively pain free, but then came a new challenge.

“I lost 50 to 60 yards off the tee. I just don’t have the mobility so I’m hitting the ball at about 70 per cent. That said I don’t lose a golf ball anymore. My friend told me that I’ve become the world’s most boring golfer,” he said with a chuckle.

Of course to even get to the point of trying to become a pro means spending a lot of time playing and practicing. Without the support of his wife Lisa and kids Linden and Sydney, plus his staff at NAPA, the dream wouldn’t have become a reality.

“The support of my family has just been amazing … I mean I golfed a lot in August in Westlock and around the province. And my NAPA staff has put up with me not being here much ... nobody once questioned why I wasn’t at work, or with my family at the lake.

“My wife and kids were just so great and encouraged me and were super supportive. I’m a lucky guy.”

Looking forward, Provencal still has some book work and courses left to complete before he can become a Class ‘A’ professional — four golf-specific courses need to be done in the first year and he’s already signed up. After that he’d like to become a teaching pro and work with area youngsters.

“I’ve got three years of my education degree to become a teacher and I love coaching. So the dream would be to specialize in the teaching and coaching aspects of golf and to grow the game here at the junior level to a place where it’s never been,” he said.

“I’ve got to finish the schooling before I can do too much, but I’ve got a golf simulator in my garage so once I’m qualified I’d like to do winter lessons I think … not every kid plays hockey.”

Hawks fly into weekend hockey action
Nov 12, 2020 3:30 PM
Comments
We welcome your feedback and encourage you to share your thoughts. We ask that you be respectful of others and their points of view, refrain from personal attacks and stay on topic. To learn about our commenting policies and how we moderate, please read our Community Guidelines.