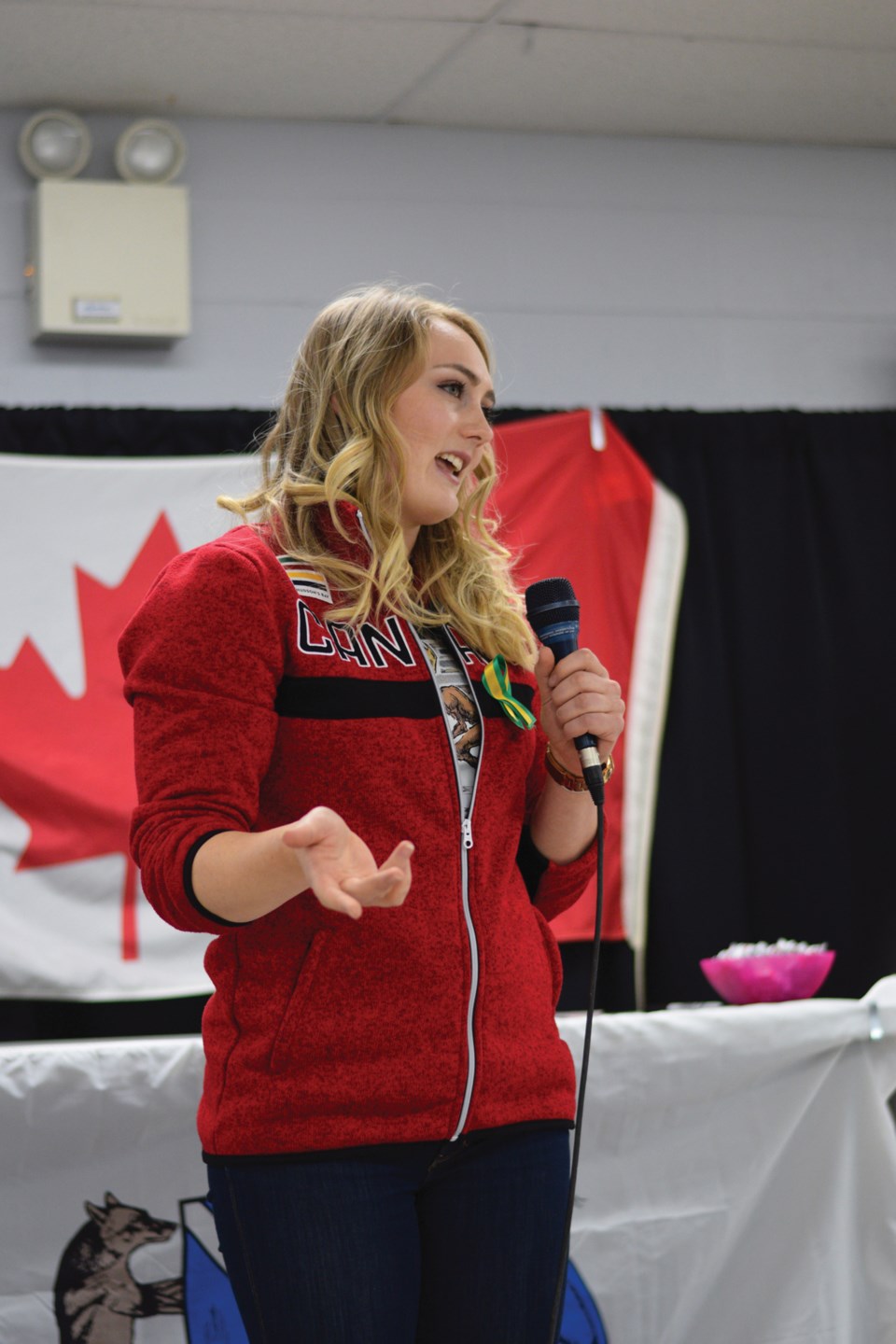 Melissa Lotholz wrapped up her second season as a bobsleigh pilot in Igls, Austria. Pictured here is Lotholz answering a question from the audience about her training regime during a ceremony welcoming her home from the Olympics at the Charles Godberson Rotary Room at the Barrhead Agrena in April 2018. Barry Kerton/BL

BARRHEAD — It was a busy last half of the bobsleigh season for Melissa Lotholz.

Since the Town & Country, last checked in with the Barrhead native, two weeks before Christmas, she has racked up thousands of frequent flier miles and competed in the trifecta of elite bobsleigh circuits, the North American and Europa Cup circuits as well as the granddaddy of them all, the Word Cup.

"I didn't realize it, for a while, but this year, as a pilot, I have competed on all the circuits, as well as monobobs earlier in the season," she said, noting that was a first in her career.

Lotholz first joined the Canadian Bobsleigh team in the fall of 2014 as Kaillie Humphries’ brakeman. She would remain one of Canada’s top brakemen for the next four years. Over that time she would accumulate 17 World Cup medals, including two World Championship silver medals as well as a seventh-place finish at the 2018 PyeongChang Olympics.

Last year she decided it was time for a new challenge and try her hand as a pilot.

After the Christmas break, in early January, the first event was in Lake Placid, New York, in the last North American Cup event of the season where she was teamed with brakeman Serena Bellocq, finishing just off the podium in fourth place. She also worked with brakeman Sarah Villani earlier in the week leading up to the race.

"I had a mixed week," Lotholz said, noting it was a much quicker track than when she last competed there in November. "I crashed a couple of times that week and in the end, because it was a relatively small field, the results were still there, but it was a hard week not only personally but as a team.

"It can make a difference," she said. "In our sport, the start and push times are very important, so where a push athlete is in their development can make a difference," she said. "But there is also a psychological component. At the end of the day, having someone in the back of your sled, that is ready to go, confident and is there for you whether you win or crash and burn, that's massive. Especially as someone who just learning to drive and is trying to learn and gain confidence, it can be everything."

Bearing that in mind, Lotholz said she has been very fortunate to work with outstanding athletes and people.

After Lake Placid, Lotholz was selected as one of the pilots to complete as part of the Canadian World Cup contingent.

The first stop being Igls, Austria, in mid-January.

Although the World Cup circuit and Lotholz said as an elite athlete, her goal is always to try to get on to the podium, however, the real goal for her teammates was to gain experience.

The Canadian bobsleigh program, especially on the women's side is undergoing a bit of a rebuilding phase. Currently, there is only one senior women's team, that being Lotholz's Olympic teammate Christine De Bruin and Kristen Bujnowski. The rest are on the national team are on the development team.

"Long term its getting runs, getting exposure to specific tracks because every track is different to develop different driving skills," she said.

In addition to the learning opportunities, Lotholz said it is always special when she gets to compete in a World Cup event.

"There's just a different ambience to it all," she said. "It's also confirmation that things are going in the right direction."

For the Igls, Lotholz was paired with fellow Albertan and long-time national team member Janine McCue.

"Janine is one of the most amazing people in our sport. She's so consistent, so hands-on and is willing to do anything that's needed to get the job done," Lotholz said.

All things considered, she is pleased with their performance, noting it was a good learning experience.

Lotholz noted that all the Canadian teams are competing at a disadvantage, noting there are three components to performing well in bobsleigh, a good push, good driving as well as excellent equipment.

"We are using rented equipment, which isn't quite as good as the top teams, our push and driving were OK but could be improved, all of this added up to where we finished."

They then moved on to Königssee, Germany, a track that Lotholz has had success at.

In an event there before Christmas, in a Europa Cup, she had a top ten performance finishing ninth with brakeman Stefanie Schoenberger and winning bronze finishing one-hundredth of a second from tying for gold.

It was in Königssee three-years ago where she won silver as a brakeman at the World Championships with Kaillie Humphries.

Unfortunately, this time she wasn't as successful.

The track due to weather conditions was very fast and the coaches felt that it might be above the development team's skill level, so they moved back to Igls to get in more training runs.

After a couple days of training, Lotholz competed in the last official event on Jan. 31, which was also in Igls, of the Canadian development team schedule with brakeman Mackenzie Stewart.

The event which was part of the Europa Cup circuit doubled as the Junior European Championships and as a result, had a very deep field, including teams who opted out of the World Cup to compete.

"It's [Igls] is a technical track but it isn't a make one mistake and you crash track, so it is a good track to build confidence on," she said.

Lotholz said once again, all things considered, she was pleased with their performance.

"We were able to take away some big positives. We were able to rebuild as a whole development team, after what was a bad week in Königssee," she said. "To come back, refocus and find that rhythm again, those are such important tools that we can utilize in years to come."

After that, the team flew back to Canada, with the development team's season officially coming to an end.

"It is a weird way to end the season, to land at an airport, say goodbye and have everyone go their own ways," Lotholz said.