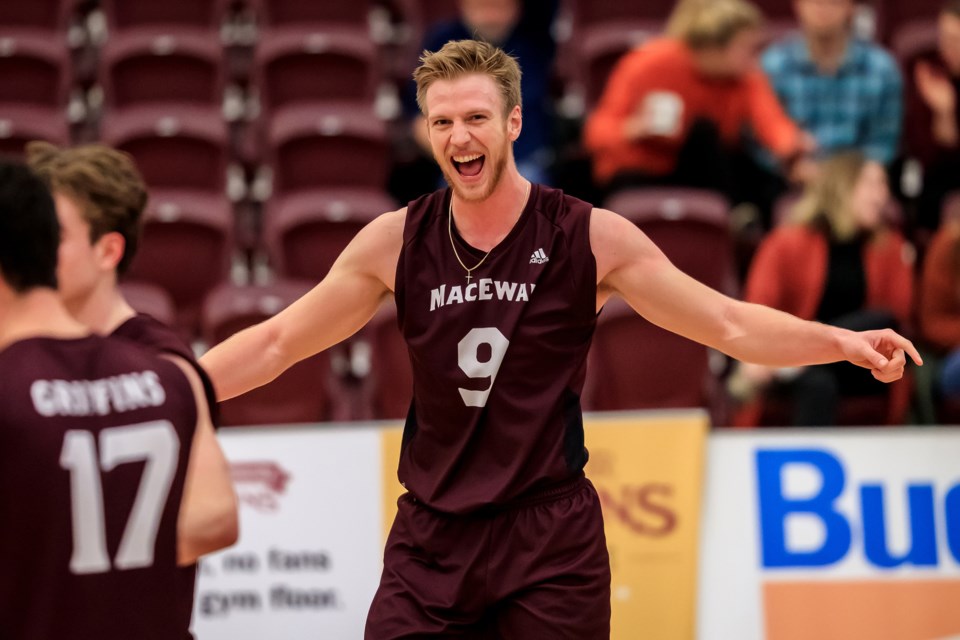 Barrhead native Max Vriend is closing in on 1,000 kills in his university career spent all with the MacEwan Griffins. When he achieves this milestone he will be only the 24th player in Canada West history to do so. Photo courtesy Robert Antoniuk

BARRHEAD - Going into the final weekend of the Canadian Interuniversity Sports (CIS) volleyball season MacEwan University Griffins star Max Vriend is close to reaching a milestone only a few college and university volleyball athletes have achieved, the elusive 1,000-kill club.

Currently, Vriend is only 11 short of netting 1,000 kills which will make him the 24th player in Canada West men’s volleyball history to reach this milestone.

It's an impressive feat for the area native who started playing volleyball in elementary school at Neerlandia Public Christian School before moving on to play for the Barrhead Composite High School (BCHS) Gryphons.

After graduation, Vriend joined the MacEwan Griffins, as a middle blocker, starting the majority of his games. Just that fact alone is a rarity for rookies in university sports.

MacEwan University Griffins’ head coach Brad Polawski, who has coached Vriend his entire university career, said he first noticed the then 16 year old in Grade 11 when he was attempting to make the Team Alberta U17 roster.

Polawski was one of the team’s assistant coaches, and although Vriend did not make the squad, he didn’t go unnoticed.

“I contacted him shortly after and he was really upset, “ he said in a media release, adding he believes that was a defining moment in the young Vriend’s life. “He could have gone two ways with it — [forget] volleyball, I didn’t make the team. But he went the other way with it saying I’m going to make Team Alberta next summer [which he did]. He’s’ shown this dogged determination; if he sets his mind to a goal, he’s going to do it.’”

After finishing his time with Team Alberta, Vriend joined Polawski on the MacEwan Griffins. He not only would go on to start the majority of his games, but was named to the CIS all-rookie team.

In addition to his distinguished university athletic career, Vriend has represented Canada as part of the Junior National U21 Team.

Polawski said he was proud to see the progress Vriend had made in his amateur career.

“I give him all the credit. We’ve pushed him pretty hard but an athlete has to want that, an athlete has to invest in that,” he said. “Every year he’s come in stronger and faster than the season before because of the work he puts in during the off-season. He’s relentless.”

Polawski added it is this type of work ethic that has made Vriend the best volleyball player in the university’s history.

And although his university career might be coming to an end, he said he is not finished playing the sport yet, adding he hopes to play professional volleyball.

“The tools that I’ve built here with the help of teammates and coaches ... it’s a means to the next step,” Vriend said.

Bottcher rink captures BP Cup with last rock
Feb 11, 2020 1:05 PM
Comments
We welcome your feedback and encourage you to share your thoughts on this story. We ask that you be respectful of others and their points of view, refrain from personal attacks and stay on topic. To learn about our commenting policies and how we moderate, please read our Community Guidelines.