Kevin Berger – Leader Staff It was a golden weekend for the Barrhead Composite High School (BCHS) Gryphons as both the senior boys’ and girls’ volleyball teams won their respective 3A Zone Championships.
Nov 19, 2019 12:01 AM By: Barrhead Leader Staff 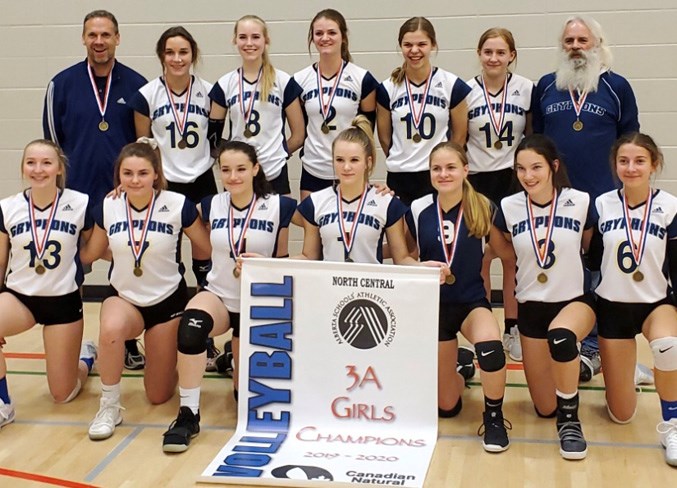 The Barrhead Senior Boys (not pictured) and Barrhead Senior Girls (pictured) Gryphons volleyball teams were the winners of their respective 3A Zone Championships this weekend. The boys competed at R.F. Staples in Westlock, while the girls played inWhitecourt. The boys won all five of their matches in round robin action and went on to defeat Edwin Parr Composite High School from Athabasca and Morinville Central High School in the playoffs. Likewise, the girls were undefeated in the round robin and went on to defeat Morinville and the host school, the Hilltop Chargers, in the playoffs.

It was a golden weekend for the Barrhead Composite High School (BCHS) Gryphons as both the senior boys’ and girls’ volleyball teams won their respective 3A Zone Championships.

The senior boys took part in the North Central 3A Boys Volleyball Championship at R.F. Staples School in Westlock, while the senior girls competed in the 3A Zones at Whitecourt.

Both teams will now head on to their respective 3A Volleyball Provincials this Thursday to Saturday, Nov. 21-23. The senior boys will play in the town of Magrath south of Lethbridge, while the senior girls will head to St. Paul Regional High School.

Gryphons’ coach Kyle Becker said a strong finish at the zone championship had been the focus of their season, as all of their other tournaments were simply in preparation for zones and the chance to extend their season for one more weekend.

Sure enough, the Gryphons girls got off to an exceptional start, as Becker said they were able to win all of their matches and only lost two sets throughout the entire round robin.

Having finished first in their pool, the girls were put into the semi-finals against Morinville Central High School.

Morinville jumped out to take the lead in their first set, but Barrhead was able to battle back and score a win.

Becker said they continued their strong play to win the second set, which put them into the championship final against the host school, the Hilltop Chargers. They played well against Hilltop and won in straight sets.

“Through the tournament we played consistently and played well,” he added.

Becker said the Barrhead girls will face a tough test at provincials, but it will be a nice way to enjoy the end of their season and to spend some last moments with some players who have been with the program since Grade 10.

“I am very proud of the girls and have enjoyed the season with this group,” Becker said.

The Gryphons boys also had a strong start at their zones, winning five out of six matches in round robin action. Their only loss came against R.F. Staples on Saturday morning, who beat out Barrhead in three sets (25-17, 21-25, 11-15).

Coach Rod Callihoo said that put them in a three-way tie for first place in their pool with R.F. Staples and Morinville, but Barrhead took the top spot by virtue of having beat Morinville.

The senior boys were then pitted against Edwin Parr Composite High School in the semi-final. They won a decisive victory in two sets (25-16, 25-9).

That put them into the championship final against Morinville Central High School, a team Barrhead has battled back and forth all year.

In the first set, Barrhead jumped out to an early lead, but Morinville battled back to win 25-23.

It seemed as though Morinville might pull off another comeback victory in the second set, but the Gryphons were able to persevere and win 26-24.

Morinville was clearly disheartened by their loss as Barrhead jumped out to a sizeable lead in the third set and won 15-10.

Callihoo said playing in this zone is tough, as it is extremely competitive with R.F. Staples and Morinville.

“It’s always been a close battle, a close rivalry with all those guys,” he said. “We know for sure when we get out of the zone … we’re battle-tested.”

Calihoo said their team came together very well this season, despite having lost a lot of leadership at the end of the last season.

“Our athletes really go the mile for us. All these guys are proud to be a Gryphon ... It’s a dogfight to get on this team within our school.”