The Barrhead Steelers ran out of time. Fans of the Midget 1 team watched the final seconds tick by helplessly as the Steelers lost 4-3 against the Slave Lake Thunder at the Barrhead Agrena on Nov. 8.
Nov 12, 2019 1:02 PM By: Barry Kerton 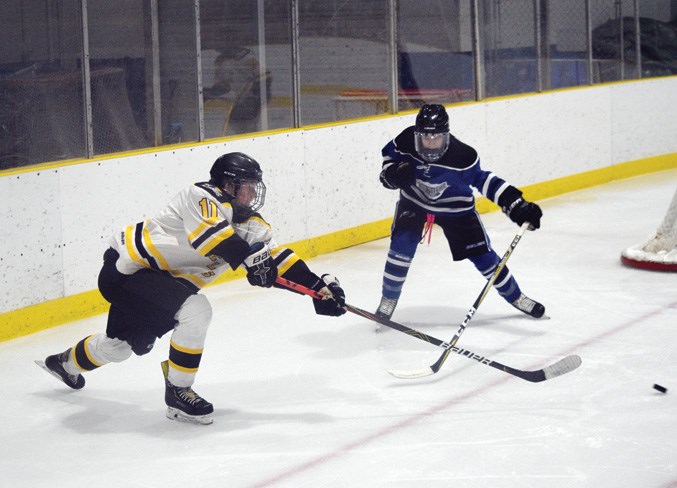 Barrhead’s Owen Stoik looks for a player to pass to from behind Slave Lake’s net. Stoik received an assist on the Steelers’ second goal by Colton Bondarchuk’s goal.

The Barrhead Steelers ran out of time.

Fans of the Midget 1 team watched the final seconds tick by helplessly as the Steelers lost 4-3 against the Slave Lake Thunder at the Barrhead Agrena on Nov. 8.

Going into the final period it looked like the Thunder had the game well in hand as they were leading 4-1, but the Steelers were not going to go down without a battle.

In the first period, Slave Lake scored two unanswered goals despite being outshot 9 to 7.

In the second period, the Thunder would increase its lead scoring their third goal with a little over five minutes into the period.

Barrhead responded about 30 seconds later thanks to a marker by captain Brendan Bujold, assisted by Jase Maskowitz and assistant captain Luke Szybunka.

Unfortunately for the Steelers, Slave Lake struck again with less than five minutes remaining in the period to regain their three-goal lead.

Barrhead’s Colton Bondarchuck would cut the lead to two on a goal assisted by Eric McLean and Owen Stoik just over six minutes into the final frame. And that’s how it would remain until close to the end of the game.

In the final five minutes of the period, Slave Lake, in response to the extended pressure put on by the Steelers, got into penalty trouble. With 5:47 left in the period, to thwart a scoring chance, a Thunder player was called for interference. Although Barrhead didn’t score on the power play, it gave the team a lift and they increased the amount of pressure on the Slave Lake defenders.

With just 1:50 left to play, in a scramble in front of the Thunder goal, Slave Lake defenceman Aaron Kuhn took a four-minute double-minor for head contact.

Twenty-seven seconds later in a goalmouth scramble, Bujold would narrow the deficit to one. As it was a double minor, the Steelers were still on the power play. Barrhead would then have a two-man advantage after the Thunder received another penalty, this time for cross-checking. The Steelers would then make it a three-man advantage after they pulled starting goaltender Caleb Brouwer.

Sadly, Barrhead couldn’t take advantage. With the loss, the Steelers record drops to 1-3.

Head coach Glen Starman said it was ironic that penalties were what let them get back into the game. It is Starman’s first year back coaching a Barrhead Minor Hockey Association team after about a five-year hiatus. He left to pursue an opportunity to coach AA Midget in the city.

“They’re definitely a tough team, but we got to play them with some discipline,” he said. “Their first two goals were with us having players in the box. The higher level you go, the more disciplined you have to be because if you take a penalty, there’s a good chance it’s going to end up in a goal.”

This year the Steelers are a Tier 1 team and the only other squad also tiered at the top level in the Northern Alberta Interlock (NAI) League is Slave Lake. Last season the Steelers defeated Slave Lake in the best of three series to win the Tier I Midget Championship. After winning the league championship they went on to compete in the provincial championships where they earned the silver medal.

However, Starman is confident the Steelers will become more disciplined as the season progresses, noting they are relatively inexperienced.

“We don’t have a lot of third-year players, but we do have a lot that are in their first. One of our goalies is Bantam age,” he said. “I really like what I see from them so far ... and the discipline will come as they play more, get more experience and grow as a team.”