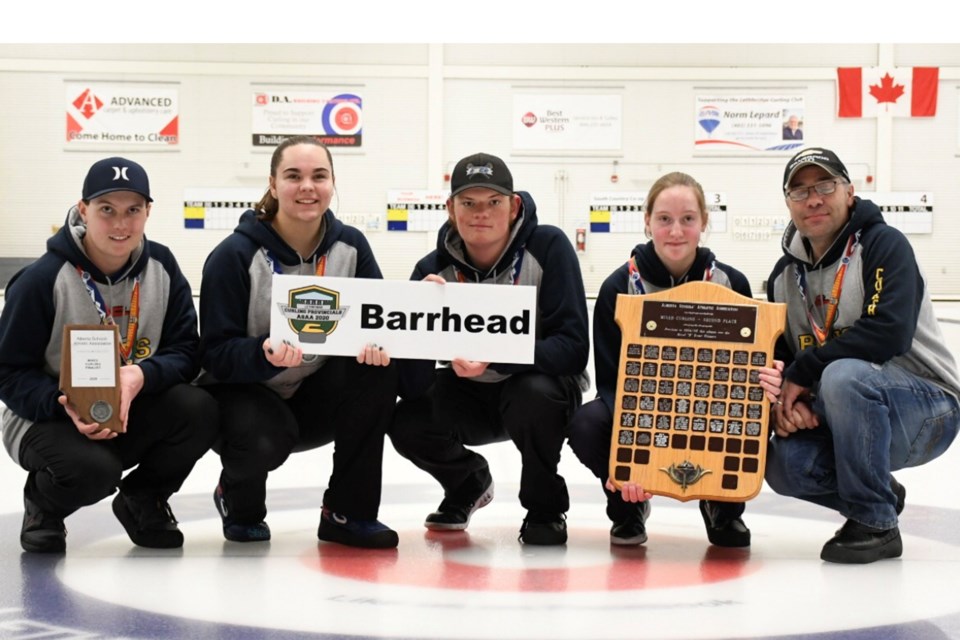 BARRHEAD - It was the kind of championship finals curlers dream about.

Unfortunately for Barrhead Composite High School’s (BCHS) mixed curling team, they came upon the wrong side of the result.

On March 7, the BCHS mixed curling team consisting of lead Erika Kerckhof, second Henry Murray, third Payton Sonnenberg and skip Curtis Sommers lost by the slimmest of margins in the finals of the Alberta Schools’ Athletic Association (ASAA) Curling Championships in Lethbridge. Their final result against Cochrane High School was 5-4 after an extra end.

Coach Rod Phillips said it was by far the best game of the six they played at the high school curling provincials. In fact, it was probably the best to watch as a spectator.

“The teams were evenly matched and played extremely well. To get into the extra end, our skip had to draw to the pin [button],” he said.

Alternately, Phillips said the opposing skip had to make a similar draw to win the match.

This is the third straight year that BCHS’ mixed team has made it to the provincial championship. Last year they won gold (although not with the same group), and in 2017, they earned silver.

The provincials took place at the ATB Centre in Lethbridge, which Phillips noted is “a wonderful facility.” It features two ice rinks that seat upwards of a 1,000 people and a 10-sheet curling rink, as well as several gymnasiums.

While he didn’t believe that all the seats were filled for the provincials, Phillips said the constant noise from all the other games added to the atmosphere of the event.(Besides the mixed event, the centre also hosted the high school boys and girls championship.)

“It was quite loud and boisterous at times,” he said. “They were quite nervous going into it, but it didn’t take long for them to settle down.”

All three curling championships started March 5 with the opening with all the teams being escorted to the into the facility by bagpipers. Following the prerequisite speeches and the throwing of the ceremonial first rock by Team Alberta’s Casey Scheidegger, BCHS played Sherwood Parks Archbishop Catholic High School.

Phillips said the outcome was never in doubt with BCHS easily defeating their opponents 7-4 in six ends. (In high school curling, matches are typically eight ends.)

BCHS’ next opponent was E.W. Pratt from High Prairie shutting them out 8-0 in six ends.

The next day they faced Cochrane and despite going down 1-0 early in the match, Barrhead rebounded and won 10-4, once again in six ends.

“It is an emotional game and momentum can often play a big part,” he said, adding part of the rink’s strategy was to keep applying pressure to their opponents.

In the final game of the round- robin, they faced Lethbridge Collegiate Institute (LCI), defeating them 9-7.

Notably, that was the first game they played at provincials to go the full eight ends.

“It was a good, close game all the way through,” Phillips said, noting they held the lead for the majority of the match-up.

The three round robin victories put BCHS at the top of their pool. In the semi-final cross-over match on the final day of competition, Barrhead played the second-seeded team from the other pool, Coaldale’s Kate Andrews High School.

Phillips noted the top two teams from each pool of five teams qualified for the semi-finals.

“That is why in a bonspiel like this it is so important to have a strong start,” he said. “If you have one or two losses early on, you can’t recover.”

BCHS won the game 6-3 in eight ends, though Phillips said the score didn’t indicate how close the match truly was.

“We had a really big third end that just gave us a cushion that they couldn’t overcome. They just ran out of ends,” he said.

In the final, Barrhead faced Cochrane High School, and as previously mentioned, it was a much closer game than their first matchup.

“I’m so proud of them. They are a great group of kids, hardworking, respectful,” he said.

Phillips noted that the team couldn’t have achieved the success that they did without the help of the parents and other volunteers.

He added the team also has a lot to look forward to, noting the oldest member of the rink — second Henry Murray — is in Grade 11.

Skip Curtis Sommers and third Payton Sonnenberg are in Grade 10, while the youngest member of the squad, lead Erika Kerckhof, is only in Grade 9.

Phillips also noted that while the high school season might be over, the rink still will be playing together for a while longer in league play and other bonspiels.