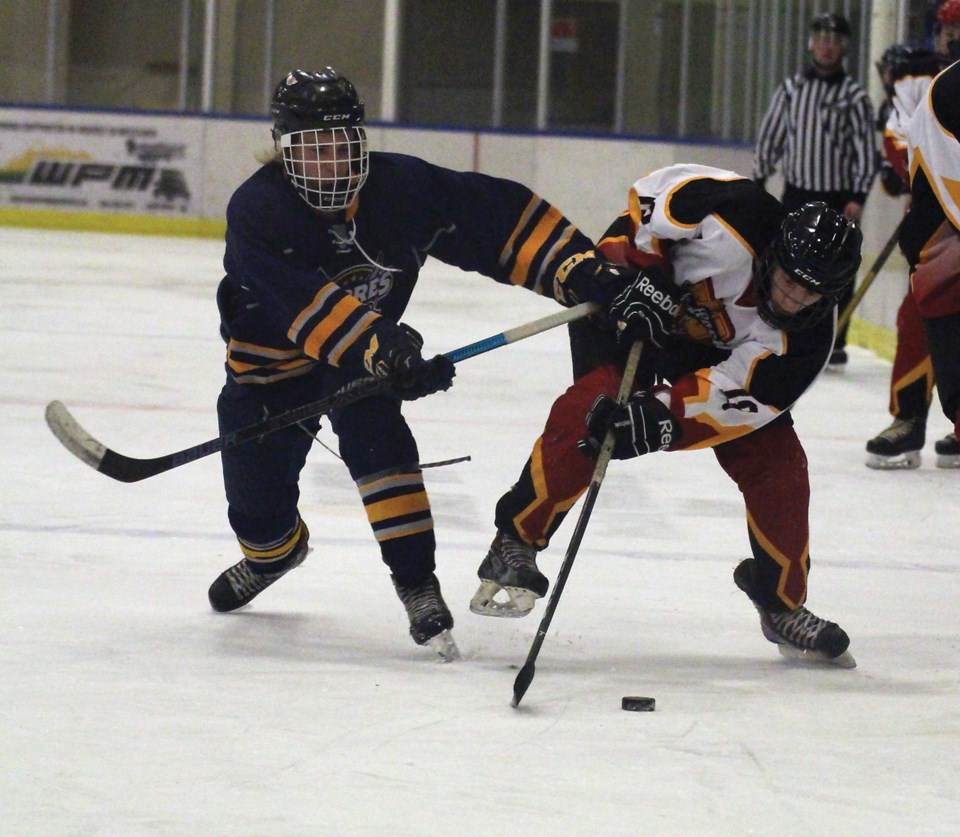 WESTLOCK - The Westlock Midget Warriors dominated the shot clock and posted a 4-3 win over Edson Nov. 23 to claim their third victory of the year.

“Our players did a very good job of maintaining an aggressive floor check, outshot the opposition … Our goaltender played well, saved us a few times, but their goalie played very well also, as you can tell,” said head coach Gilbert Dubrule.

The final tally showed 64 shots on the Edson net versus 29 heading toward Warriors goalie Zachery Cartier, who had to make some difficult saves, said Dubrule.

Jordan Garbiar opened the game with a powerplay goal in the first period with 55 seconds left. Evan Brost brought the score to 2-0 in the second, which came during a delayed penalty for Edson.

Edson made their first appearance on the scoreboard soon after, but it was followed by another Warrior goal from Jonathen Servage.

The second period ended at 3-2 when Edson scored just a minute later. In the third, Alexander Balderston widened the gap to two, but while Servage was in the penalty box Edson scored again.

With a 3-3-1 record so far this season the Warriors are in fifth place in the Northern Alberta Interlock League.

“We lost some close games. We lost a game 9-8 a couple of weeks ago in New Sarepta … just a weird game where it seemed like everything that got shot to the net at either end went in. But we’re sort of middle of the pack in that tier,” said Dubrule.

Heading into the weekend, the midgets are preparing to host the Gordon Smith Memorial Tournament Nov. 29 to Dec. 1, typically a time of team bonding as they head into the second half of the season.

“We had five kids leave from last year … it’s still a relatively young team. Midgets is three years of hockey and I think we only have three third-year kids on our team.”

Three teams they don’t usually play will make their way to Westlock and this year organizers added a three-on-three hockey demo for Saturday afternoon.

“Years ago, and for many years, (Gord Smith) was a real supporter of sports in Westlock and especially hockey. In his honour, the family sponsored a tournament and trophy for him. That tournament has continued on for many, many years now.”