Neerlandia native set to go to her second Paralympic Games 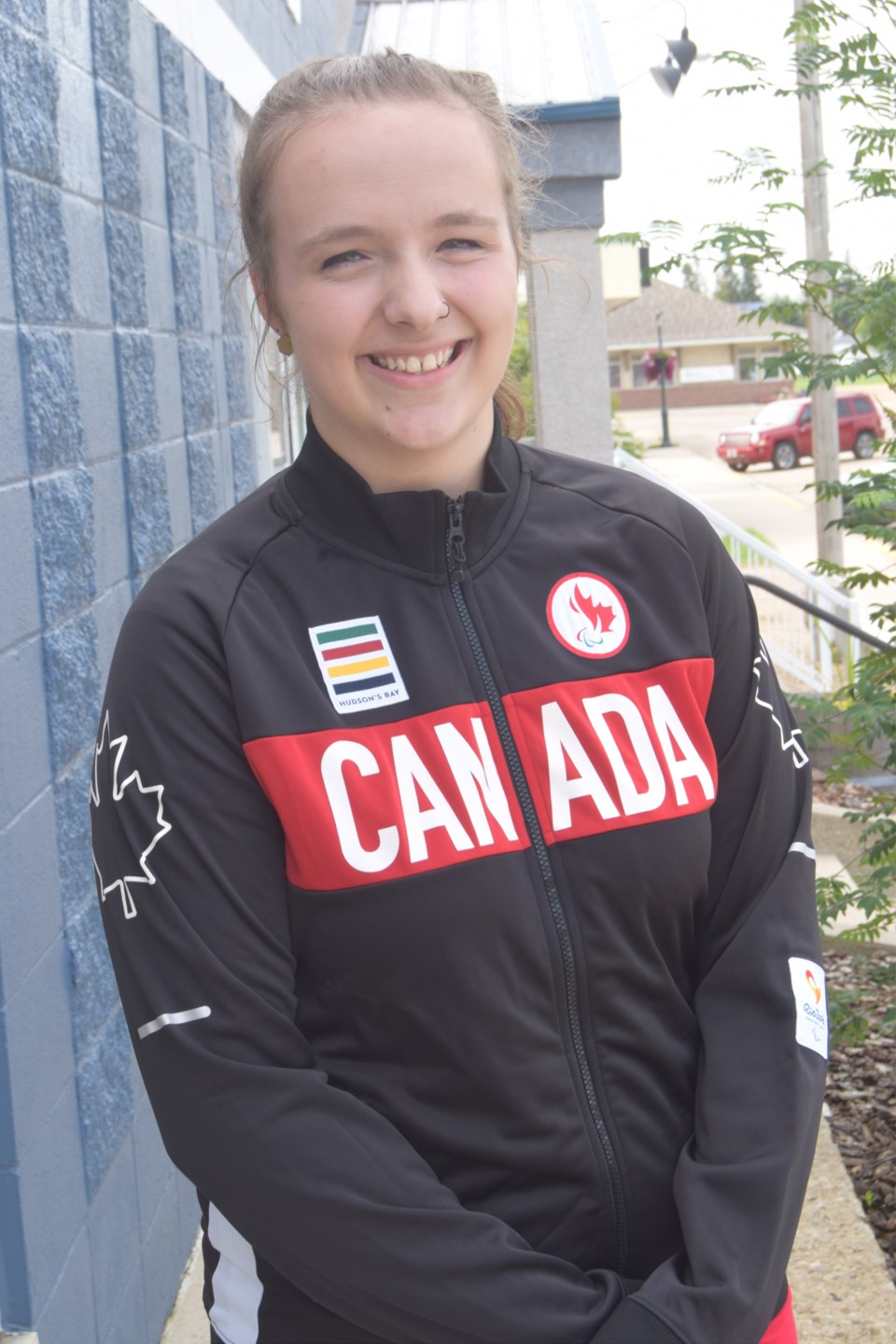 Heidi Peters in her Rio de Janeiro Paralympic Games team jacket will be going to her second Paralympic Games after the Canadian women's sitting volleyball team qualified for the Tokyo in a tournament in Halifax.

BARRHEAD-When Heidi Peters returned from competing in the 2016 Paralympic Games in Rio de Janeiro, Brazil she made herself a promise that in four years she would be back at the games competing for Canada.

And although her return to the games will be delayed by at least a year, it is a promise she will be able to keep.

Peters is a member of Canada's women's sitting volleyball team. The squad qualified for the upcoming Paralympic Games at the "Last Chance" tournament in Halifax in late February.

A month ago, the International Olympic Committee (IOC) succumbed to mounting pressure from the athletic and scientific communities, among others, to delay the start of the Olympic and Paralympic Games until the summer of 2021 due to the coronavirus pandemic.

The 26-year-old Neerlandia native said it was the right decision and one the IOC might not have come to if it were not for pressure exerted by Canada.

"It is pretty amazing to be part of the [Canadian Olympic Commitee] that put the health of its athletes first, saying that the games should be postponed and if they were held, they would not be sending their athletes," she said.

Canada, Norway and Australia petitioned the IOC to have the games postponed and stated they would not participate if the games were held as scheduled.

Peters became involved in the Paralympic movement after undergoing treatment for osteosarcoma, a bone cancer, which saw her left leg amputated. She was first diagnosed with it in September 2011.

It was during these cancer treatments that she met Jolan Wong, a player in the Canadian Women’s National Sitting Volleyball program. Like Peters, Wong lost her leg to osteosarcoma about seven years earlier.

It was Wong who first suggested that Peters try out for the national sitting volleyball club.

In May 2013, Peters, who played volleyball throughout her Barrhead Composite High School career, successfully tried out for the national team, where she has remained since.

Peters said qualifying for the games was a nerve-wracking experience.

In August of 2019, Canada's women's team had a chance to guarantee their spot in the Toyko Olympics at the Parapan am Games in Lima, Peru but unfortunately, they lost their qualifying match against Brazil.

Brazil is one of the top teams in the world, according to World ParaVolley it ranks the nation in the top three in both men and women sitting volleyball.

"It was a very hard loss for us," she said, noting at the time they believed they lost their last chance to qualify for the Paralympics.

However, they then learned they would have one more opportunity to earn their ticket to the games at the Halifax tournament.

"We just really buckled down and started training at home and prepared for two training camps, one in December and one in January," she said.

The Canadian Sitting Volleyball program is based at the University of Alberta's Saville Community Sports Centre.

Peters added shortly before leaving for Halifax, the majority of the team, met in Edmonton to train together, in one last effort to prepare for the tournament.

And their efforts paid off, as the contingent went a perfect 6-0 in the tournament, defeating a strong Ukraine club in three sets in the championship match.

"It was a surreal experience," she said.

After a quick celebration, she and her teammates were excited to start preparing for the Paralympics but then the bottom fell out of their efforts as a team when the COVID-19 crisis started to take its toll.

Peters noted the women's program was fortunate to be able to qualify for the games when they did. The Canadian men were slated to take part in the men's "Last Chance" tournament slated for March 16 in Edmond, Oklahoma but due to COVID-19 travel and meeting restrictions, it has been put on hold indefinitely.

Of course, the restrictions have also put a major crimp into her training schedule, noting at the time of the interview, April 21, she was supposed to be in Egypt playing in a tournament in the leadup to the Paralympic Games.

"We are doing what we can to stay active. We all have volleyballs and we are hitting them against the wall or practicing with roommates," she said.

Peters noted for the time being that might be the bulk of her training noting her ability to keep physically active in Edmonton is limited.

Unfortunately, training isn't the only area of her life that has been impacted by the coronavirus restrictions saying she was recently laid-off from her job as a part-time travel agent. She also just finished an abbreviated semester at MacEwan University where she is working her way towards a bachelor of arts degree in psychology.

Originally she planned to take the spring semester off, to prepare for the Paralympic Games, but to help fill her days.

However, she is cautious to take on too many courses, because when restrictions are eased she wants to be able to resume full-time training.

"All my decisions are based on volleyball because I want to make sure I can perform at my best on the court," Peters said.

Western States Hockey League (WSHL) pulls plug on 2020/21 season
Jun 28, 2020 11:07 AM
Comments
We welcome your feedback and encourage you to share your thoughts. We ask that you be respectful of others and their points of view, refrain from personal attacks and stay on topic. To learn about our commenting policies and how we moderate, please read our Community Guidelines.