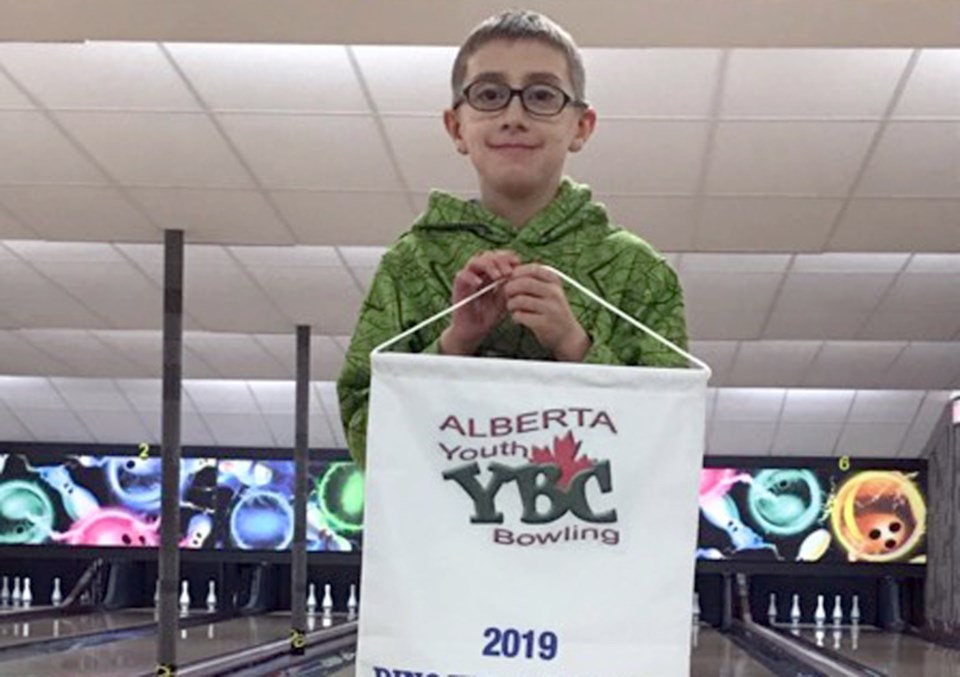 The local bowling alley has another banner to hang from its rafters after nine-year-old Jacob Barrett brought home a gold medal from the 2019 Dino Kids/Peewee North Provincial Championship held at various locations around northern Alberta Dec. 7.

Barrett joined 25 other boys his age from as far away as Lloydminster with each bowler playing on their own lanes and scores then reported to Bowl Alberta.

Barrett finished with a pins over average (POA) score of 98.

He described the experience as “awesome.”

His mom Ellen explained the POA was determined by taking the average of the players’ previous game before the championship and the game following the tournament, then comparing those to their championship score. It just so happened Barrett bowled a 205 in his previous game.

All this while overcoming an injury he suffered months before.

The Grade 4 student has only been bowling for two years and is already winning championships.

“He’s proud of himself, but he’s pretty humble about it,” said Ellen, adding that just participating in the sport has noticeably increased his confidence.

“I’ve always made my kids follow through with everything. He’s had his moments of not wanting to, but he pushes through. This is a good life lesson to show what happens when you work hard and you follow through.”

Barrett said he plans to continue bowling for the foreseeable future.

While he said he enjoys bowling a lot, he has no intention of pursuing the sport as a career. Instead he wants to play professional baseball.

Warriors playoff hopes hanging by a thread
Jan 17, 2020 12:13 PM
Comments
We welcome your feedback and encourage you to share your thoughts on this story. We ask that you be respectful of others and their points of view, refrain from personal attacks and stay on topic. To learn about our commenting policies and how we moderate, please read our Community Guidelines.