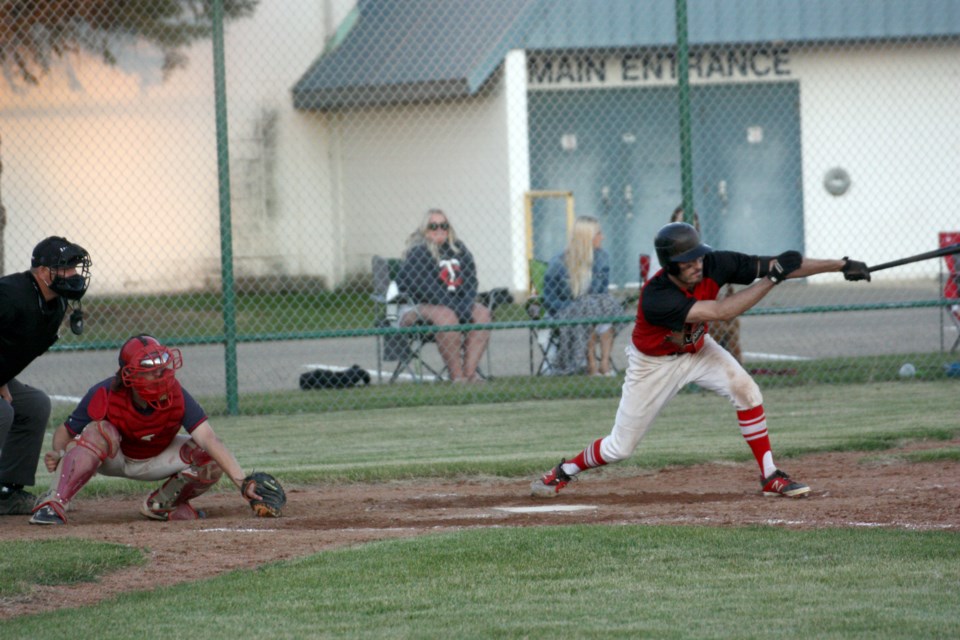 Facing a full count with two outs in the bottom of the seventh, Red Lion Hayden Chies delivered the game-winning hit in their 2-1 win over the Parkland Twins Aug. 26. The victory earned the club the NCABL pennant. George Blais/WN

Coupled with their 2-2 road tie versus the Twins Aug. 28, the club finished the abbreviated NCABL regular season with a sparking 7-0-1 record.

Player/manager Chris Brand said the club didn’t have their sights set on a league title when their season started July 15 against the Fort Saskatchewan Reds, but as the wins continued to add up, their confidence continued to grow.

“We never expected to win the division let alone the pennant. It’s just something that’s continued to build and as our record kept on getting better and better we definitely began to focus on the pennant race and trying to win it,” said Brand.

In the pennant-clinching game the Twins jumped out to a 1-0 lead in the first, but the Red Lions responded in the bottom of the frame. From there the clubs traded chances, but neither were able to scratch out a run — first-year Red Lions starter Kyle Lawrence was dominant on the hill all night to earn the ‘W’.

“He kept that team off balance all night long. He’s one of the best pitchers in the league,” said Brand on the left hander.

Meanwhile in the top of the seventh, second baseman Taylor Heck made a diving catch in the hole which seemed to embolden the club, who never looked worried.

“That was a big, big play for us,” Brand noted.

In the bottom half of the inning, the hometown boys were able to get runners at the corners and on a 3-2 count with two outs, first-year Red Lion Hayden Chies delivered a single up the middle to plate Nathan Brown.

“The boys battled through the whole game and remained focused. We never felt uncomfortable at all. We have a lot of veterans on our team so not too many things throw us off.”

Looking forward to the post-season Brand said they don’t care who they play — depending on the outcome of the weekend games they’ll face either the Sherwood Park Athletics or the Edmonton Primeaus.

“Both teams on the other side are in the Top 3 in the league so it’s going to be a battle whoever we face.”

Ultimately Brand said they’re happy just to be able to host a playoff game and bring some baseball to town.

“It’s nice playing in your home community and having the support of your fans. With the fair not happening this year — typically the league semifinals are held in Westlock during that — it is nice to have some meaningful games here.”