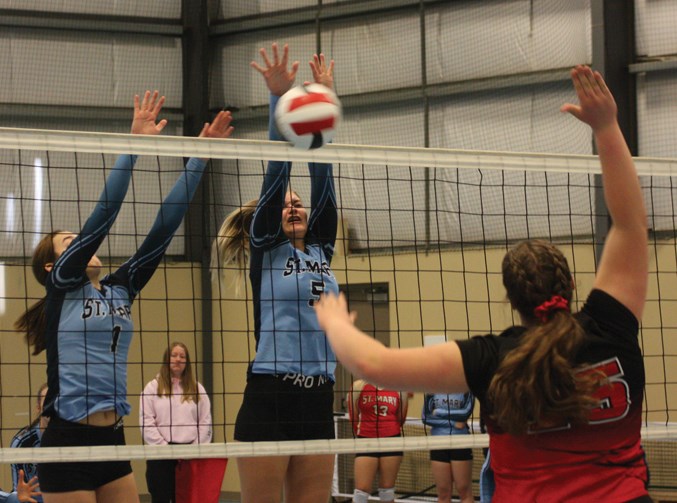 St. Mary Sharks Meadow MacDonald and Jenna Schwarz go up high for a block during the senior girls match against Thorsby Nov. 16 at the Rotary Spirit Centre, which was part of the 2019 North Central 1A Volleyball Tournament.

An up-and-down year for the St. Mary Sharks senior volleyball teams came to an end last weekend and while the season finished with both teams making it to the finals of the zone tournament, both boys and girls came up just short of those elusive gold medals.

The Sharks hosted the 2019 North Central Zone 1A Volleyball Tournament Nov. 16 at the Rotary Spirit Centre, welcoming 15 boys and girls teams from similar-sized schools from across the region to determine who would hang the banners from their rafters. And while the medals may be a different colour than what they hoped for, coaches for both teams said there is a lot for the high school athletes to be proud of this year.

“I’m very proud,” said boys coach Vance Nakonechny. “It’s tough getting that close though, but overall I’m proud of both teams. It was a tremendous day overall ... We raised the level of our play throughout the day and just seemed to get better and better and better and the boys performed so well. They pulled everything together and they have no reason to hang their heads whatsoever.”

Girls coach Ty Snell said this tournament was the best finish for the St. Mary girls team since 2006-2007.

“They just really bought in. Every single player on the team bought into our system this year. It started with the Grade 12s and  trickled down to the rest of the team. We’ve been building this team since three years ago when we lost to Grand Trunk and didn’t make it to zones and then last year we were dead last in zones and didn’t win a single set and this year we’re silver medallists. I’m very proud of what they did this year,” said Snell.

On the girls side, the Sharks put up a perfect round robin, beating teams from Thorsby High School, Kinuso School  and Covenant Canadian Reformed School (CCRS) from Neerlandia to place first in their pool, which earned them a bye into the second round where they defeated Boyle School with few problems.

Evansburg’s Grand Trunk High School did provide a problem for the girls though as they fell in two sets in the final, to earn the silver medal. 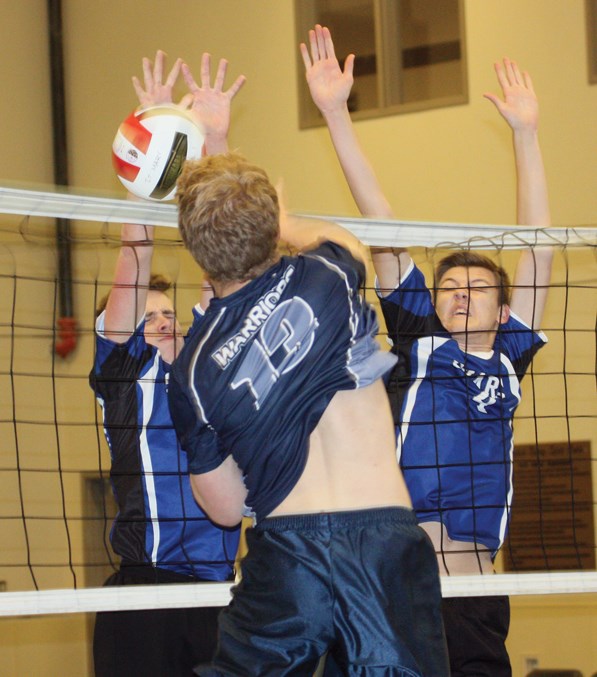 The boys came up against Living Waters, from Spruce Grove, twice during the day-long tournament — once in the round robin and then again in the tournament final and while the Sharks played a much more disciplined game in the final, they still came up short and settled for silver. Living Waters has been the team to beat all year and showed why with the gold medal winning performance.

The Sharks finished second in their pool of three teams after dropping the first game to Living Waters and then prevailing over Grand Trunk High School from Evansburg.

From there the boys went on to the playoffs with a win against Thorhild Central School and another against CCRS from Neerlandia and earned the right to a rematch against Living Waters in the gold medal match, which they lost.

For Grade 12 student Jaiden Romanuik, who, along with teammate Connor Tymkow, has now played his last volleyball game in a Sharks jersey, it was an emotional night.

“It was pretty emotional, just realizing this was the end and having such a hard-fought, close game, so the emotions were definitely going there for a while,” said Romanuik. “It was a pretty good way to go out. Second in zones is great. In Grade 10, we got third in a heartbreaker, then last year was brutal, but this year was just awesome to be a part of.”

He doesn’t plan on going any further with volleyball after he graduates in the spring, though you may see in a rec league somewhere along the way, he said.

The girls team will also be losing part of its core group as seniors Elise Terrault, Jenna Schwarz and Siara Nadeau graduate in the spring. It was an emotional end to the season for them as well.

“We’ve worked so hard this entire year. Our coach has been building us up since Grade 10, so we’ve been working our butts off to get where we are now,” said Terrault.

Both Schwarz and Terrault have been involved in volleyball since Grade 7, but Nadeau has only been playing since last year. She also suffered a recent injury to her leg during practice and was unable to take part in the zone tournament, but she said she cheered on her teammates from the bench the best she could.

“This is our last game ever and I love our team so much. We all love our team and we’re like a family and we’ve spent so much time together coming from a small school. We’ve played sports together since Grade 7 and it’s just really hard,” said Schwarz.

The seniors wished next year’s team well and predicted they will do great as they are all “really great players, with a really great future.”

“Best of luck to the guys that will be around next year and thanks to all the parents, coaches and every one that helped make this year a success,” said Romanuik.