Steelers streak comes to an end

Stuffed animals will be gathered up at next home game and donated to Barrhead Victim Services Unit
Feb 4, 2020 3:30 PM By: Kevin Berger and Barry Kerton 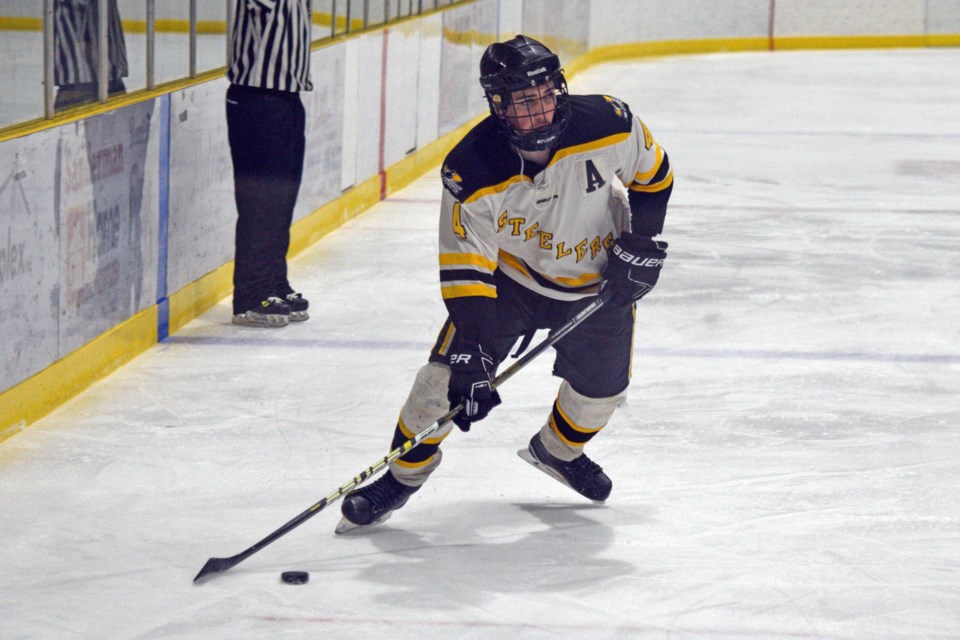 The Barrhead Midget Steelers 10-game unbeaten streak which started on Dec. 6 came to an unabrupt stop Jan. 31 with a 3-1 home loss to the Camrose Vikings.

The Steelers hit the scoreboard first thanks to a goal by Jase Maskowitz, assisted by Riley Jones. The period ended with Barrhead leading 1-0 and holding a short edge in shots 8-6.

Camrose tied the game up early in the second period less than two minutes in when the Steelers were caught running around in their zone.

Barrhead Steelers Luke Syzybunka had a chance to get the goal back when he got a partial breakaway while the team was shorthanded but thwarted by Camrose’s starting goaltender and former Barrhead resident Tyler Hillyer.

In the third period, Camrose would take the lead on the power play at about the seven-minute mark. They would extend their lead about four minutes later.

Head coach Glenn Starman although he gave credit to Camrose and Hillyer said the team loss was due to a lack of urgency.

“There was a big difference from our game last week and tonight,” he said, referring to the team’s Jan. 24’s 8-3 home win against Wetaskiwin.

“We took it to [them], a team that is at the top of Tier 2 and gave Slave Lake a good go ... tonight we just didn’t have our legs going and everyone thought someone else was going to do it.”

However, Starman was confident the squad would bounce back and have a good outing in their next game.

“It was a good wakeup call and they are a good group,” he said.

Starman also gave credit to his goaltender Luke Kristiansen who made several outstanding saves in the first and second periods to keep them in it.

Northern Alberta Interlock (NAI) has chosen the format its Midget Tier 1 teams will need to qualify for the provincial championships.

Because the NAI only has two teams, Slave Lake and Barrhead in Tier 1, they will play each other in the best of three series.

As of our publication date, the schedule for the series has not been selected, however, Starman believes it will begin in late February to early March.

A beloved tradition at junior and Western Hockey League games is coming to Barrhead, as a “teddy bear toss” will be held during the Barrhead Midget Steelers’ home game at 8:15 p.m. this Friday, Feb. 7.

A teddy bear toss is where fans throw stuffed animals on to the ice, usually when the home team scores its first goal. The toys are then gathered up and donated to local charities.

In this case, the teddy bear toss will take place when the buzzer sounds at the end of the first period, before the zamboni cleans the ice.

The Barrhead Novice 1 Bears will be helping to collect all of the toys, according to Coralee Chase, a parent of a Novice player.

Chase said admission to the game is free, so all people need to do to participate is bring a stuffed animal to the Barrhead Agrena that night and toss it on the ice when the time is right.

“We’re going to have plastic bags to put the teddy bears in,” she said, noting that people don’t have to wrap the toys pre-game.

All of the toys will be donated to Barrhead Victim Services Unit (VSU) so they can distribute them to children during times of crisis and turmoil, Chase said.

“They’ll know where these things can be used best,” she added.

Chase said this would be Barrhead’s first teddy bear toss that she and others know of. Their goal will be to collect 100 stuffed animals and teddy bears.

Western States Hockey League (WSHL) pulls plug on 2020/21 season
Jun 28, 2020 11:07 AM
Comments
We welcome your feedback and encourage you to share your thoughts. We ask that you be respectful of others and their points of view, refrain from personal attacks and stay on topic. To learn about our commenting policies and how we moderate, please read our Community Guidelines.