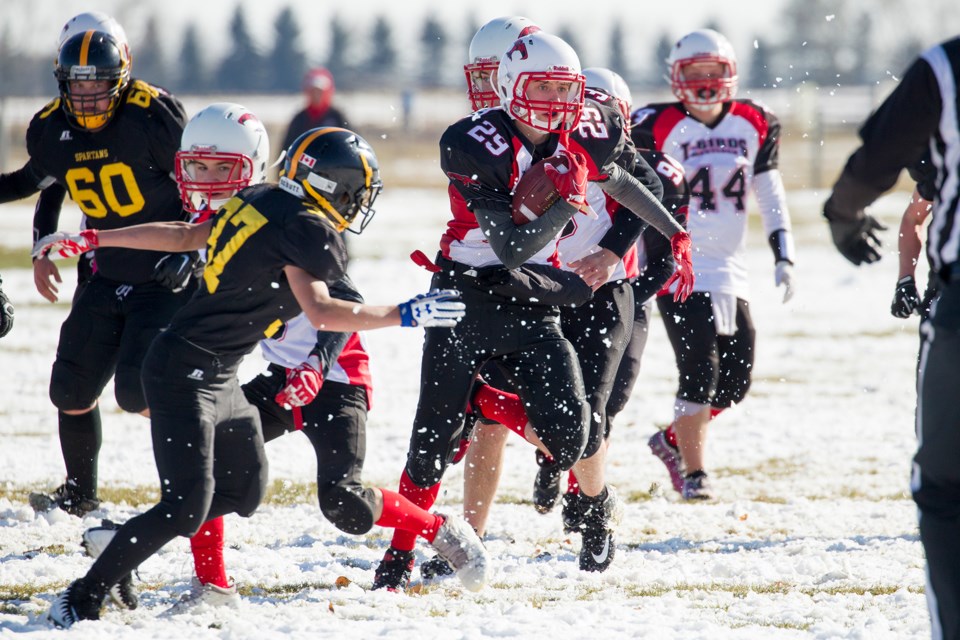 The Thunderbirds football team is hoping to get back on the field in August, this time outside of the Wheatland Football League. Noel West/WN

WESTLOCK – Football is one of the sports caught up in the flurry of coronavirus cancellations, so the Westlock Thunderbirds are also on hold despite their season’s start in September.

“We’re waiting on those with authority. We’re still optimistic that we’re going to be able to give the players a season in the fall. It’s challenging for us because we run the whole month of May as our spring training and then we break for the summer and pick up in the middle of August,” explained coach Jon Kramer.

At this point, May is a write-off, he added, although hopeful that they can restart in August.

“We’ve told the kids ‘Do your best to get out when you can and stay fit, stay mentally engaged, get your schoolwork done.’”

Registration for the team is also on hold. Before the Alberta Health Services measures were put in place, the Thunderbirds held one registration day in Westlock, but the Barrhead and Athabasca ones “didn’t go,” said Kramer.

“The funds will just go back if there’s nothing to register for.”

The Calvin McCarty’s Skills N Drillz football camp, which was supposed to run its first of six sessions March 23, was postponed as well – the Town of Westlock had already announced it was closing the Rotary Spirit Centre, where the camp was supposed to take place.

Organizer Marissa McCarty says 20 kids had signed up for the camp, and they’re looking to reschedule once the measures are lifted.

Ultimately, what happens with the football season “is well beyond our own decision-making capabilities,” said Kramer.

For the Thunderbirds, Football Alberta and the Alberta Schools’ Athletic Associations, football’s two governing bodies, will ultimately decide what happens with the football season.

“So much of their decisions came down to insurance providers too. Once it was labeled a pandemic, nobody’s insured for everything.”

“They do this U18 tournament, it’s every province and a U18 all-star team, they cancelled that. A lot of that is just logistics for the summer, they just thought it’s too much money to set aside if things don’t work out.”

The Thunderbirds, until now, have played within the Wheatland Football League. This fall, the team exited that league and instead booked several exhibition games with teams throughout province.

“We’re on a path where, for the time being, we’re creating our own season for exhibition games. We have a handful of games already booked for the fall with teams in and around the region, down to Red Deer, Olds, Drayton Valley, and then we’ll book a few games with Edmonton teams too,” said Kramer.

The schedule is, of course, on hold. Should things pick up and sports reopen come September, that’s how the Thunderbirds will proceed.

“We’re excited about what we had lined up before all this went down so we’re hopeful that we’ll get a shot to get together and play some games again and have some normalcy come back.”

Athabasca-area powerlifter qualifies for World Championship
Mar 29, 2020 6:17 AM
Comments
We welcome your feedback and encourage you to share your thoughts. We ask that you be respectful of others and their points of view, refrain from personal attacks and stay on topic. To learn about our commenting policies and how we moderate, please read our Community Guidelines.