Warriors Taylor Heck and Scott Westerlund celebrate after Heck potted his first of two goals in the second period during the Warriors 5-2 victory over the Red Deer Rustlers Nov. 1 at the Rotary Spirit Centre.
Nov 5, 2019 12:08 AM By: Chris Zwick 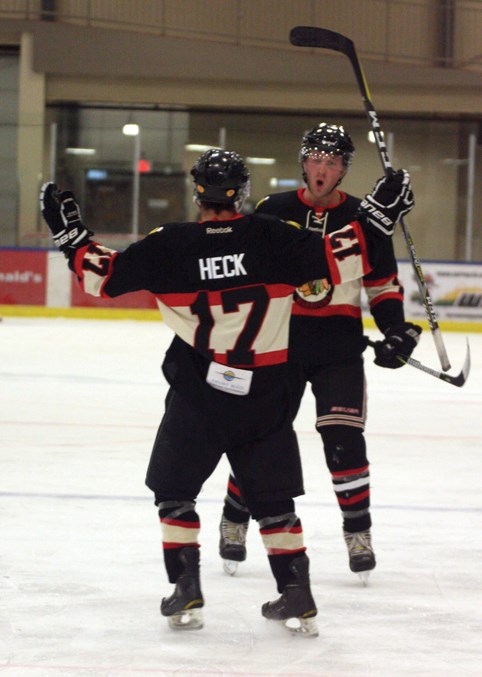 Warriors Taylor Heck and Scott Westerlund celebrate after Heck potted his first of two goals in the second period during the Warriors 5-2 victory over the Red Deer Rustlers Nov. 1 at the Rotary Spirit Centre.

Warriors Taylor Heck and Scott Westerlund celebrate after Heck potted his first of two goals in the second period during the Warriors 5-2 victory over the Red Deer Rustlers Nov. 1 at the Rotary Spirit Centre.

Two goals each from Taylor Heck and Nicholas Bourgeois, along with a pair of assists from newcomer Nikolas Koberstein on the blueline, helped lift the Westlock Warriors over the Red Deer Rustlers 5-2 last weekend.

The Nov. 1 win at the Rotary Spirit Centre brings the senior ‘AA’ club to 4-2 on the season, which is good enough for third place overall in the North Central Hockey League.

“It was a massive win, Red Deer is a good team, so we were really happy to come out on top,” said coach and centre-man Mike Ivey. “They’re a new team and they’ve got some guys who have played some pretty good hockey.”

Goaltender Jordan Brand was once again named first star of the game, stopping 57 of the 59 shots the Rustlers pelted him with throughout the game.

“He was unreal,” said Ivey.

Heck and Bourgeois earned second and third star accolades in the victory.

The two teams traded goals in the first as Bourgeois got his first of the night about two minutes into the game, with an assists from Ivey and Barrhead native Koberstein, a 2014 Montreal Canadiens draft pick.

“Lots of guys on the team played minor hockey with Nik and other guys played summer hockey with him. He’s played some pretty darned good hockey ... He’s just settling back into the farm at home and we’ve been hoping he would come out to play. He was able to join us and we’re hoping he’ll be able to come out for the rest of the season,” said Ivey.

Red Deer took the lead part way into the second before the Warriors responded with a flurry of four more goals before the end of the period coming off the sticks of Bourgeois, Ivey and two from Taylor Heck. There was no scoring in the third and the Warriors left the ice with a 5-2 win under their belts.

The Warriors are back on home ice at the Spirit Centre Nov. 9 to take on the Daysland Northstars. The team will also be debuting their new red jerseys that night, before hitting the road to play the first place Morinville Kings Nov. 16.