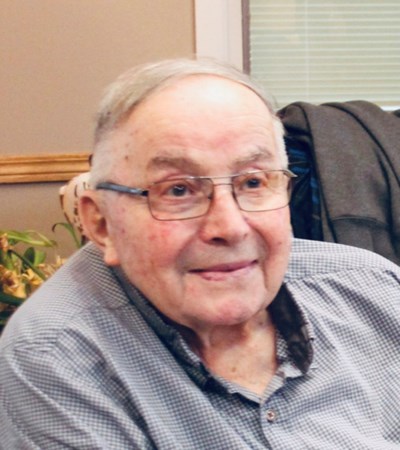 It is with great sadness that the family of Alex Krawec of Athabasca, Alberta announces his peaceful passing at the age of 91 years.

Alex was well known for his remarkable work ethic, creativity, ingenuity, integrity, generosity, positive attitude, faith and community and cultural mindedness. He was a well known farmer in the Richmond Park area where he and his wife Millie, when married in 1952, worked hard to develop a successful mixed farm and raise their four children. In 1974, he lost a loving wife and mother to his children. He remarried in 1977, and he and Helen farmed until 1982, when they retired and moved to Athabasca.

Alex was involved in his community from an early age. He and his brothers were very musical and in the 1940’s formed an orchestra that played at numerous community dances. He started a successful sawmill with his father and brothers, Steve and John, and they supplied lumber to build their homes, outbuildings and other homes and buildings in the community. With his father, brothers and community members they built a community hall and several churches.

He served the public as a county councillor, county Reeve, town councillor, and a board member for the hospital, health unit, school and recreation boards, to name a few.

Upon his retirement from the farm, Alex drove school bus, the Handi bus for senior transport, was instrumental in building the Athabasca Seniors Centre, the Athabasca Golf Course Country Club, and several memorial cairns.

Alex was an avid hunter and fisherman all his life, a passion he was able to share with his children and grandchildren.

He was always grateful that he was able to travel across Canada, to Mexico, the Ukraine, and cruise the Caribbean. His experience in life enabled him to be a self-taught carpenter, electrician, welder, machinist and basically a jack of all trades. He will be remembered for his many qualities as well as his skill of negotiation, mediation and diplomacy.

There will be a public viewing held on January 5, 2021, from 1 – 5 pm at the Athabasca Community Chapel.

In lieu of other tributes, donations may be made to the St. Peter and St. Paul Ukrainian Orthodox Church in Athabasca.

The family would like to extend our appreciation and thanks to Dr. Klopper and associates, Dr. Schaub, Dr. Mol and all the staff at Extendicare and Pleasant Valley Lodge for providing excellent and compassionate care to Dad both recently and throughout the years.

Lastly, a heartfelt thank-you to the Athabasca Community Chapel for assistance with all arrangements.