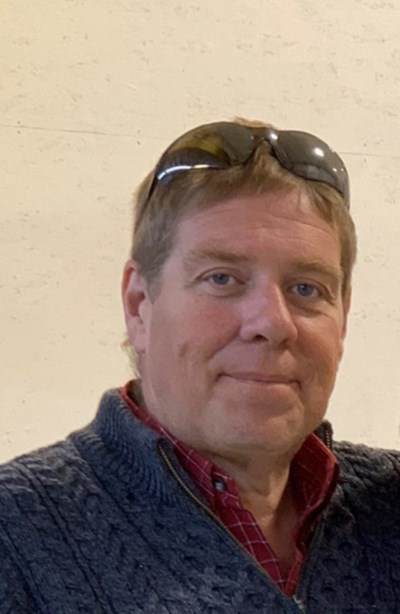 It is with utter sadness that the family announce Dave Notenboom’s passing on March 17, 2021 at the age of 49, after a courageous battle with cancer. He is survived by his loving family, his wife; Beverly, children; Justin (Cailie), Jarred (Keri), his grandchildren; Keyrah, Sterling, Carson, Lincoln, Braylee,
Ora, his parents; Marjorie and Pleun, his siblings; Coby (David), Len (Cheryl), niece; Julia (Alistair) as well numerous other family members and those that he loved as family.

On a spring day, the 21st of May 1971, Marjorie and Pleun Notenboom welcomed the newest member of the family. Coby and Len had a new baby brother, David. There were many trying times ahead for Marjorie, as Dave was forever being taken to the ER to be stitched up. Fish hooks will leave a mark, and usually need to be removed by a doctor. So much excitement.  Dave called home at least once a week. You know his parents did right by him.

As a youth in Calgary, Dave spent time fishing the Bow River, many times the big one “slipped” off the line. There were many hours spent with his band mates practicing the music and steps needed to be in a world class marching band. Great long-lasting friendships where formed through these experiences.  Dave spent time living with his brother Len, while finishing college.  A tight brother’s bond was formed (this was beautifully portrayed as Len and Cheryl
came to be by his bedside). Meanwhile Coby had met, and married her David. Blessing this union was a beautiful little girl, Julia.  Uncle Dave immediately in love with the bouncing baby. She had him completely wrapped around her tiny little finger. She still does. Coby was the “older sis”, her little brother was a delight..lol her love and dedication shines through, Coby was here with Dave at the end, watching over his wellbeing with everything she had. Helping
the family understand what Dave was going through. Using her vast medical experience daily to ensure his comfort as he passed from this world. Mom and dad Notenboom FaceTime daily being with us, keeping the family together. Giving Dave courage, love and peace. Dave learned that being a parent was not as easy as his parents made it look.  He became a dad of two rambunctious boys (12 and 13 yrs old), when he married his wife Bev in 2005. He found he had a lot to learn about patience and time outs, usually his.  Grandchildren abound, making life so much more fun, the prospect of teaching them to fish. Priceless. He found that love grows the more it’s given. And his love for his family and friends knew no bounds.

Whether he was enjoying a rousing game of poker, a good football game, quiet round of golf, fly fishing the Tay River or  a Flames game, these were especially great when done with friends new and old.

Dave was a genuinely sincere person who had the ability to allow others to feel at ease with who they were. There will be many who will feel the impact of his death, as he was a great source of optimism and joy. Wherever Dave worked, Lammles Western Wear, IGA, The Back Forty, or Pembina West Co-Op, it was always about the people.  He will be missed.

Donations in Dave’s memory can be made to a charity of one’s choice.

Funeral arrangements entrusted to Amanda Lambert of Rose Garden Chapel. Expressions of sympathy may be made at www.rosegardenchapel.com