Sieste Vandermeulen was one of 45 Albertans sent to battle wildfires in Oregon and California
Oct 18, 2020 7:00 AM By: Barry Kerton 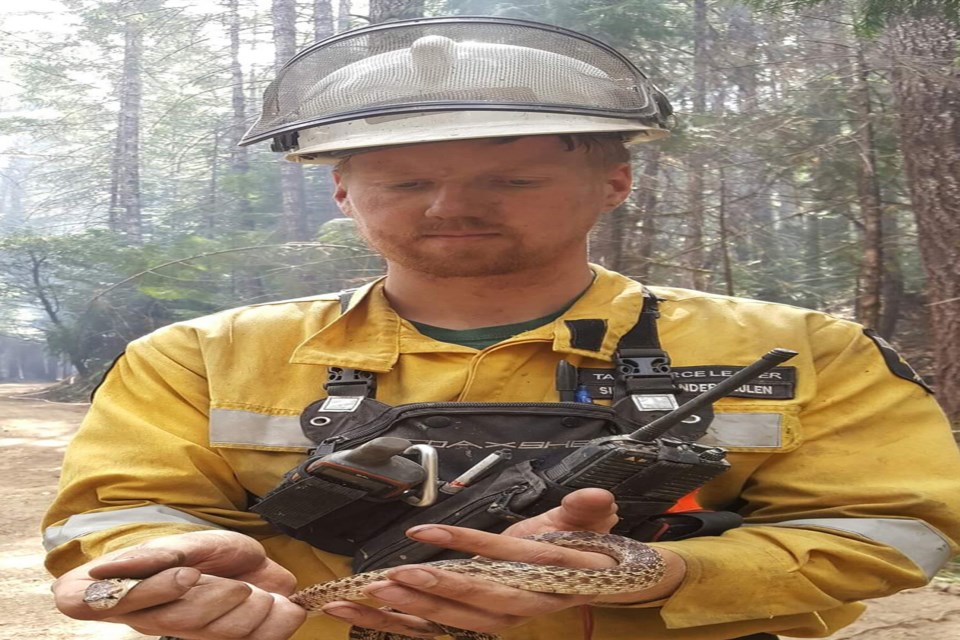 Sieste Vandermeulen helps relocate a gopher snake to a safer location away from fire crews who were battling a wildfire in Oregon. submitted

BARRHEAD-When Sieste Vandermeulen was growing up on a dairy farm, just outside of Barrhead, that also had cattle and grain, he never dreamed he would end up battling wildfires in Oregon near the California border.

Vandermeulen is a forest officer and wildland firefighter with Alberta Agriculture and Forestry and is currently-based in Hinton.

But that is what he did for 14 days in September working as a task force leader as part of a 45 person Alberta contingent of firefighters and other support staff who went in three groups to support their U.S. counterparts.

Alberta returned the favour when 450 U.S. firefighters from the Pacific Northwest a year earlier in the Chuckegg Creek wildfire near High Level as well as one north of Slave Lake.

He noted his experience working on those fires might have been a bit of foreshadowing as he worked with many Oregon Department of Forestry firefighters.

Which is one of the reasons why when he heard they were looking for Alberta firefighters to help, he jumped at the chance.

Vandermeulen left for Oregon on Sept. 14, taking the scenic tour, stopping in Idaho for shelter training and a briefing, before hitting the road again, travelling through Washington and most of Oregon. All totalled it was about three and a half days of straight driving.

Once he arrived, on-site at the Slater fire which bordered California, Vandermeulen went through a quick training session, mostly on the local fauna, and what would be the first of many briefings.

A few hours later, at 2 p.m. on Sept. 17, he found himself on the frontline of the fire as part of a short orientation process.

One of the first things he noticed was that there were differences not only the terrain but how Oregon wildfire suppression efforts are organized.

"The public is much more involved," he said. "The second you get down there you have the state employees who are doing the logistics for everything and then landowners who offered the use of their equipment."

The other major difference Vandermeulen noticed was there were a lot more boots on the ground. In Alberta, he said, in his experience wildfires are fought using a lot less ground personnel and more aerial support.

For the most part, he said the terrain was similar to Hinton, with a lot of rolling hills, but the ecosystem was quite different to what he is used to.

"It is much dryer, consisting of serpentine going into pine stands," Vanermeulen said.

He explained serpentine as land with a lot of brush and grasses.

As it is a desert terrain the fauna and wildlife were different than he has experienced.

Poison oak and rattlesnakes being the most annoying and dangerous difference. To protect themselves from potential rattlesnake strikes while they walked, the Oregon firefighters had a chainmail type sock. Unfortunately, he wasn't as well equipped.

"I'm used to a different ecosystem where there is a lot of freshwater everywhere my footwear is a modified rubber boot which isn't too effective against snake bites," Vandermeulen said.

Fortunately, he only encountered one rattlesnake, which announced its presence well in advance.

As task force leader, Vandermeulen had several crews and resources that he was responsible for guiding while battling the fire on a section of the line. Initially, as a new task force leader, he had limited resources under him, and was responsible for a smaller area. However, both grew gradually daily. At the end of his tour, he had several crews and 15 to 20 different resources to call upon over several kilometres of fireline.

A typical day started at 5:30 a.m. with a briefing, giving about 400 to 500 firefighters and other emergency personnel, information about what the fire had done overnight, what it was projected to do, et cetera, along with the general plan of attack for the day.

He would then attempt to complete his group's objectives for the night. The day would end at about 8 p.m. and after a meal and a shower, he would turn in for the day before repeating the entire process the next day.

After his time on the line, he returned home and went into self-isolation and after taking a couple of days off he was back at work, at home, completing overdue paperwork that piled up in his absence. When the Barrhead Leader spoke to Vandermeulen, he only had a few days left in isolation and was looking forward to his weekend out.

How he got into wildland firefighting

After graduating from Barrhead Composite High School (BCHS) spent a couple of years taking odd jobs, learning what he did not want to do.

But that is when fate stepped in. One night Vandermeulen was sitting in a pub with some friends when one of them showed him pictures of what he had done over the past summer, most notably fighting wildfires.

He then applied to what was then Sustainable Resource and Development (SRD), now Agriculture and Forestry and was accepted and spent the next summer fighting wildfires.

After the fire season was over, he enrolled in MacEwan University taking a few courses with hopes of pursuing something in business. But Vandermeulen quickly realized, thanks to his experience fighting wildfires, he knew a career in forestry was his future.

So in 2015, he enrolled in NAIT's forestry program.

"It was a wonderful program. It had a lot to offer and I just had a great time," he said.

To help pay for his schooling and augment his education, Vandermeulen got a job with NiKal Environmental Solutions, a company that worked in the oilfield, helping companies with reclamation projects.

After graduating, he got a job with Alberta Agriculture and Forestry, spending three years in the "hack" wildland firefighter program before being promoted to a wildfire ranger and then a full-time forest officer.

"Its the best of both worlds. In the summer months, I do wildfire and in the winter with industry, working with the logging and forestry companies in the area," he said.

A short investment of time can make a big difference in a student’s life
Oct 29, 2020 4:00 PM
Comments
We welcome your feedback and encourage you to share your thoughts. We ask that you be respectful of others and their points of view, refrain from personal attacks and stay on topic. To learn about our commenting policies and how we moderate, please read our Community Guidelines.