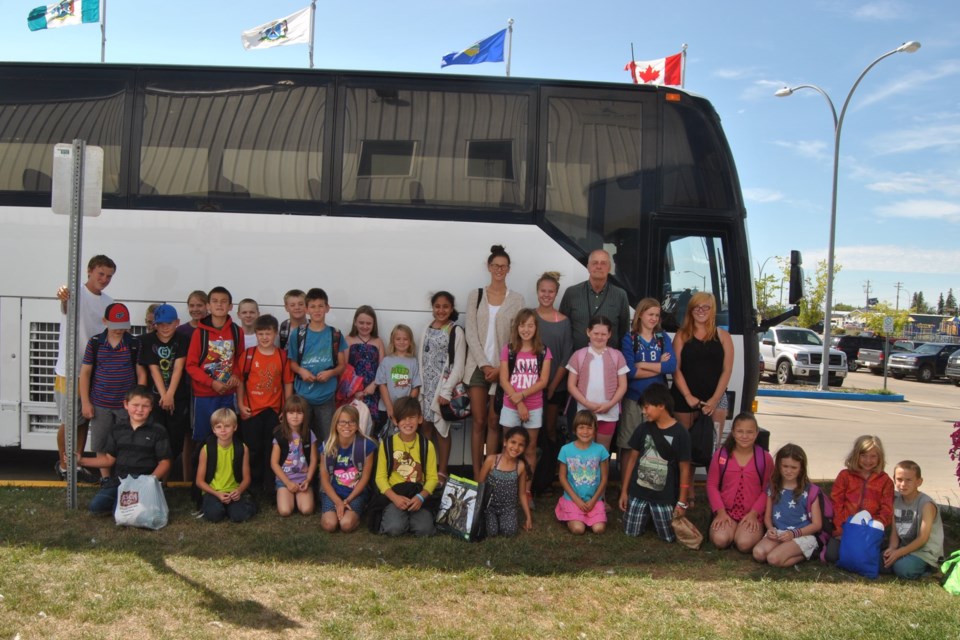 John Van Beek poses with a group of youth in Barrhead's summer recreation program at the Agrena before taking them for an afternoon of swimming at the Westlock swimming pool in the summer of 2015.
BARRHEAD-Barrhead is in mourning after learning the loss of a prominent community member.

For many people in the community, Van Beek was best known for being the wheels of the community, as the owner of All-Pro Bussing Charter Service and on any given day would be transporting everyone from a busload of seniors as part of Barrhead and District Family Community Support Services' senior's excursion program to a group of young athletes going to a hockey tournament.

County of Barrhead reeve Doug Drozd was shocked to learn the news. Like many people, he had heard about Van Beek's contributions in the community but he didn't know him personally.

Drozd added his contribution to Barrhead's efforts to help woo schoolteachers and other potential staff to the community.

Two years ago, the County of Barrhead along with the Town of Barrhead organized a series of events, to help Pembina Hills School Division (PHSD) inspire more of their staff to live in the school division and the communities where they work. As part of the effort, PHSD offered $2,500 to 500 to any new or existing staff if they move their primary residence into the division’s geographic area. The incentive is no longer offered.

"The events were quite successful and several teachers moved into the community and the bus tours were a big part of that success," Drozd said.

"John was a fixture on the tour from long before I started," he said. "It was something he would love to do. Every year he would call me and ask when it was going to happen because he did not want to miss it."

Meunier credits a large part of the tour's ongoing success, to Van Beek.

"I think people went on the tour specifically because of John. He was very outgoing, had a great sense of humour and had a lot of stories to tell," he said, adding long-time Town and Country writer Les Dunford especially loved swapping stories with Van Beek during the tours.

"He was really a community-oriented guy. Any time you asked him to take a group of kids somewhere he was raring to go," he said.

McKenzie first met Van Beek at Barrhead Elementary School where he worked as a janitor when he was at the school as part of the CARES program.

Barrhead Cares’ is a coalition of community members who banded together in 2003, initially as the Barrhead and District Drug Coalition, to combat the problems associated with effects of alcohol and drug use in the community. In 2012, the group changed its name to Barrhead Cares to reflect its growing mandate.

"He believed in the program. I remember when he took a group of kids to downtown Edmonton to the police station, all pro bono," he said. "He was interested in the betterment of the community and did what he could to contribute. He was a good guy all around."

Karl Baker, a long-time friend of Van Beek, agrees with everyone's assessment of his friend. The pair met when a friend of Baker's married Van Beek's daughter. Because Baker's friend lived in Grande Prairie, when they came to Barrhead, he would go to his new in-laws.

"They were just nice people," he said, about John and his wife Kori.

However, he said what he would remember the most about his friend was his sense of humour.

"He was always giving it to you ... never in a mean way. He kept you on your toes that's for sure."

However, although Van Beek liked to joke around Baker said he was a very good driver and was committed to his passenger's safety. "When you rode with John you always knew you were going to arrive safe."