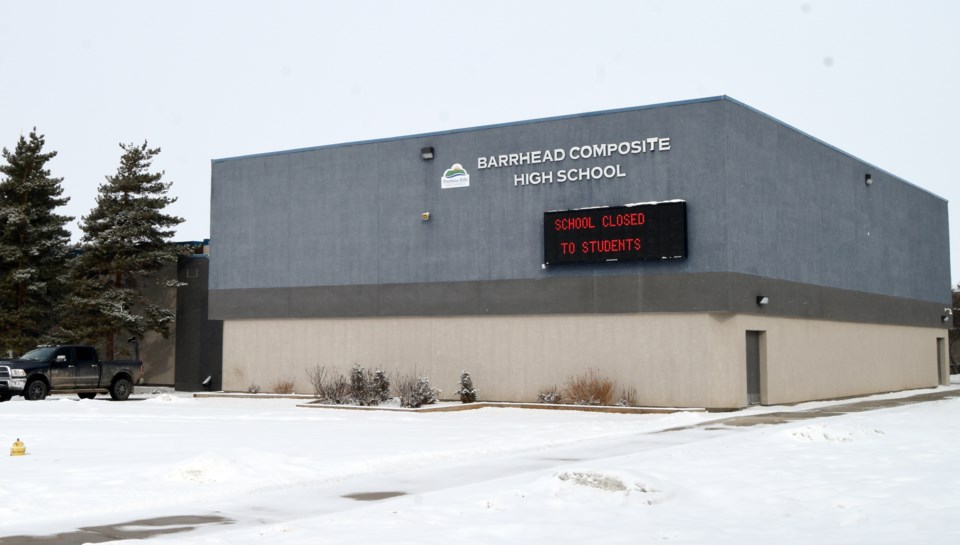 A new Barrhead Composite High School is at the top of the Pembina Hills School Division's three-year capital plan. The new school would house Grades 6 to 12 and accommodate up to 1,000 students. Barry Kerton/BL

BARRHEAD - A replacement school for Barrhead Composite High School (BCHS) that would house up to 1,000 students from Grade 6-12 is the new top priority within Pembina Hills’ 2020-2023 Capital Plan.

Pembina Hills trustees passed a motion during their March 18 meeting in Barrhead adopting the new three-year capital plan. After a replacement school for BCHS, the second priority in the capital plan is a full modernization of Westlock Elementary School.

School divisions must submit their three-year capital plans each year to Alberta Education by March 31. These plans include a list of priority capital projects that each division would like the province to proceed with.

Based on the priorities identified in past three-year capital plans, Alberta Education has approved a replacement for Eleanor Hall School in Clyde, a replacement for Neerlandia Public Christian School and the addition of six modular classrooms at Pembina North Community School in Dapp.

The full modernization of BCHS and Westlock Elementary have been the top two priorities in the capital plan for several years now.

However, Pembina Hills has undergone a process over the past two years to determine the best option for dealing with the aging school building, which was originally constructed in 1958 and was expanded in 1961, 1962, 1969, 1980 and 1989.

As noted in a report to the board, Alberta Education funded a “value scoping” session for BCHS back in November 2018. The session was attended by representatives of local municipalities, Alberta Education, Alberta Infrastructure and various consulting firms.

The report arising from that value scoping session returned to the board in June 2019 and was then accepted for information in October.

The report looked at several different options, including the construction of a new Grade 7-12 high school for 900 students on the existing site, as well demolishing various portions of the building to right-size it for its current enrolment and then modernizing the rest.

However, the report indicated the “best value option” was a 1,000-student capacity replacement school built beside the existing site.

This would house students from Grades 6-12. As part of the project, the southeast wing of Barrhead Elementary School would be demolished and the building would be reconfigured to Kindergarten to Grade 5.

The new building would then be linked to Barrhead Elementary School. The total cost of this project is estimated at $44 million, though that should only be considered a rough figure.

The value scoping report also recommended securing outside partnerships to retain the three gymnasiums, cafeteria and foyer area, and the CTS (Career and Technology Studies) classrooms.

The report notes that on Jan. 20, 2020, a meeting was held between Pembina Hills, the Town of Barrhead and the County of Barrhead to discuss potential partnership opportunities for the ‘old’ BCHS building.

Discussions centred around the possibility of establishing a community hall/field house within the old school’s gymnasiums, or possibly reconfiguring the CTS classrooms as a space for other community groups.

Pembina Hills was looking for ‘in principle’ letters of support from the town and county. These would not be binding documents, but merely an indication both municipalities are open to partnerships.

“Although BCHS is the number one capital project for Pembina Hills, funding is totally dependent on the province. Once funding is secured, many steps would occur before the project would become a reality.”

A letter from County of Barrhead Doug Drozd indicated they discussed the matter on Feb. 20. He said retaining the old BCHS could cost in excess of $2.5 million, but that would still be cheaper than building a new field house in the community.

Drozd said the municipality is open to exploring the feasibility of partnering with the town to preserve the gymnasiums, cafeteria and 3,200 square metres of mechanical rooms at the school.

He also said the county sees value in preserving the CTS space at the old BCHS school, though the county is not prepared to assume responsibility for this space.

A letter from Town of Barrhead mayor Dave McKenzie also states the municipality is interested in exploring a potential partnership to secure a portion of the old high school to serve as a community-owned facility.

“We feel there is a significant community benefit to further our discussion regarding the three gymnasiums, associated offices and potentially the CTS (classrooms),” he said.

The other priority in the plan, as indicated earlier, is a full modernization of the 1970 section of Westlock Elementary School.

Barrhead Continuing Care rolls out new visitation policy
Aug 9, 2020 3:04 PM
Comments
We welcome your feedback and encourage you to share your thoughts. We ask that you be respectful of others and their points of view, refrain from personal attacks and stay on topic. To learn about our commenting policies and how we moderate, please read our Community Guidelines.